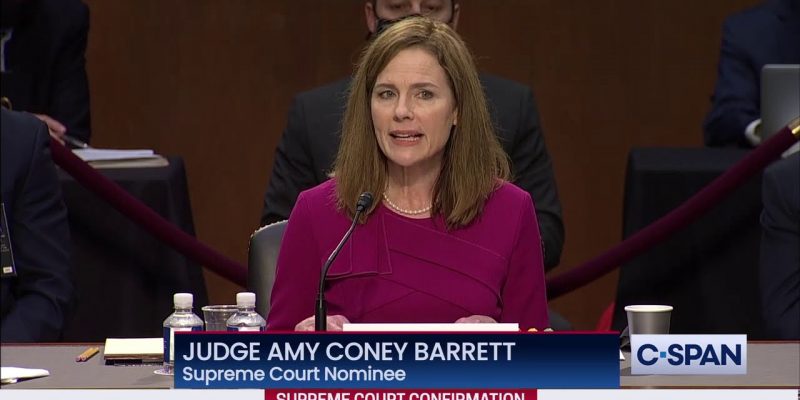 The news hit yesterday that Amy Barrett is due for a Senate Judiciary Committee vote tomorrow and a confirmation vote Monday on the Senate floor. It’s clear Senate Majority Leader Mitch McConnell isn’t playing around and obviously has the votes, he believes, to strangle any Democrat procedural delays that would lengthen the confirmation process past the election. By Tuesday, one week prior to the Nov. 3 election, Barrett will be a member of the Supreme Court.

And that’s how the American people want it, according to Gallup. Fox News…

A new Gallup poll shows that a majority of Americans support the confirmation of Judge Amy Coney Barrett to the Supreme Court by a slim margin.

The poll, released Tuesday morning, revealed that 51% of participants said they are in favor of President Trump’s latest nominee joining the high court, compared to 46% who are opposed. Just 3% said they do not have an opinion on the matter, the lowest number since Gallup started taking polls on Supreme Court nominees.

The poll was taken from Sept. 30 – four days after Trump nominated Barrett – to Oct. 15, the final day of her confirmation hearing.

The Senate Judiciary Committee is scheduled to vote on Barrett’s nomination on Thursday. The full Senate will then hold a vote on whether to confirm her to the Supreme Court. Senate Majority Leader Mitch McConnell tweeted Monday that he will make sure the process moves forward swiftly.

It isn’t just Gallup, by the way. Morning Consult’s numbers are even more definitive. 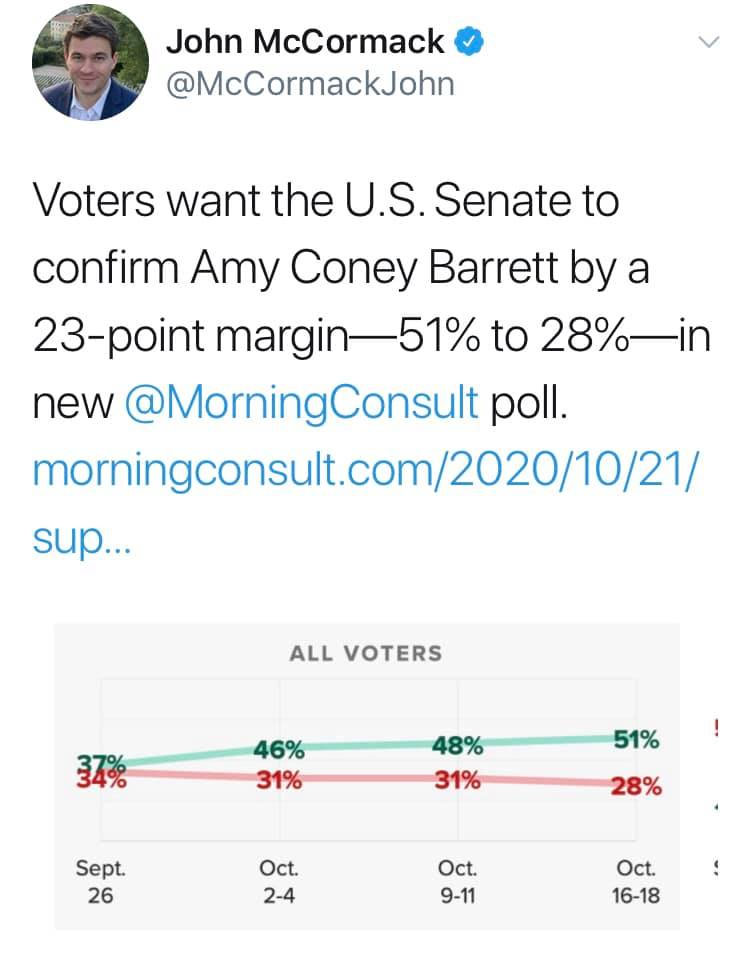 But the Democrats’ Senate leader Chuck Schumer isn’t giving up…

Senate Minority Leader Chuck Schumer again temporarily commandeered Senate proceedings on Tuesday, forcing votes to halt consideration of a $500 billion Republican-backed coronavirus stimulus bill and to shut down the Senate until after the election.

Schumer, D-N.Y., cited his objections to what he called Republicans’ “stunt” on coronavirus stimulus and “illicit process” to confirm Supreme Court nominee Amy Coney Barrett before the presidential election. This is despite Senate Judiciary Committee Ranking Member Dianne Feinstein, D-Calif., calling the Barrett hearing “one of the best Senate hearings that I’ve participated in.”

The minority leader, who typically does not take control of the Senate floor in the way he did Tuesday per Senate tradition, has said that he will not allow “regular order” in the Senate because of the way Republicans are handling the Barrett confirmation with what he says is “no respect for the institution.”

And Schumer has more internal problems than anybody thinks. There is this…

“I’ve had a long and serious talk with Senator Feinstein. That’s all I’m going to say about it right now,” Schumer told reporters at a news conference, The Washington Post reported.

Feinstein, the 87-year-old senior senator from California, serves as ranking member of the Senate Judiciary Committee, the panel before which Barrett appeared.

After the hearings concluded, Feinstein faced a torrent of criticism from Democrats and others on the left over her line of questioning of Barrett – criticism that appeared to intensify last Thursday after Feinstein was seen sharing a hug with her longtime Republican colleague, Sen. Lindsey Graham of South Carolina, who chairs the committee.

Several critics called upon Feinstein to give up her role as the top Democrat on the panel, The Washington Post reported. As ranking member, Feinstein stands to replace Graham as chair if Democrats take control of the Senate in the Nov. 3 elections.

In the case of at least two of Schumer’s contingent the Barrett vote is going to be a real problem.

Obviously Joe Manchin of West Virginia, who voted for Barrett’s confirmation to the 7th Circuit Court of Appeals, will be worth watching. It’s going to be hard for Manchin to switch to a “no” vote with any real justification; he’s already pronounced her fit as a judge. And Manchin has built his career on the idea he isn’t just some partisan Democrat. With 51 percent of the American public backing Barrett’s confirmation, it’s a pretty good bet that a lot larger percentage than that backs her in conservative West Virginia. Does Manchin really want to put himself in the eye of that storm?

And then there’s Doug Jones, who is almost certain to take a drubbing at the hands of former Auburn head football coach Tommy Tuberville in Alabama. Polling shows Jones down by 15 points or more to Tuberville in that state, and Barrett is almost certainly favored by more than 51 percent of the public in Alabama. A Jones vote against Barrett closes off any hope of a miracle finish for him.

But at this point Jones probably figures he’s a lost cause so he might as well vote no.

Barrett is going to be confirmed anyway. Schumer’s dilatory tactics attempting to push the nomination past the election aren’t going to work.

So the question is, do you let Manchin vote for her, or do you demand iron discipline on the D side?

A Manchin vote for Barrett isn’t a good look, because it signals that not everybody on the Democrat side is on board with the Hard Left agenda. As Barrett is something of an avatar for Trump, a Manchin vote for Barrett signals that working-class Democrats in Appalachia, who have been part of the Trump coalition for the past five years, are still with him – and that could have implications not just in West Virginia but more importantly in Pennsylvania and Ohio (and even as far south as North Carolina).

That isn’t good. It essentially sacrifices Biden, who almost certainly loses the election if he can’t carry Pennsylvania. There’s a reason the Democrats are now deploying Barack Obama to stump for him there. And after all the caterwauling about Barrett’s nomination and all the horrific predictions about what she would do to Obamacare or Roe v. Wade, etc., should Amy Barrett end up with even a tiny bit of a bipartisan confirmation vote it would make Schumer and the Democrats look ridiculous.

But on the other hand, if Manchin votes no on the confirmation, what does that do for the key voting group – suburban white women – that Team Biden is counting on to save them? The yoga-mat crowd, we’re told, is turned off by Trump’s tweets and mannerisms and will vote Democrat because Biden is less threatening.

Polling somewhat validates this, though polling would seem to be quite unreliable on that subject. After all, who but safety-obsessed suburban white women would be most likely to be “shy” Trump voters?

Leaflets are being put on doors in suburban Kansas City and other places threatening Trump supporters with violence. If you think that, coupled with Antifa/BLM rioting and other incidents in advance of the election wouldn’t have the effect of (1) turning off the soccer moms and pushing them to Trump, but (2) making them wholly unlikely to tell that to strangers, then you aren’t paying attention.

That’s bad news in Senate races all over the country.

There are no good options for the Democrats at this point. Barrett is going to be a problem for them Nov. 3. The question is how to minimize that damage, and frankly, there might not be a way to do it.