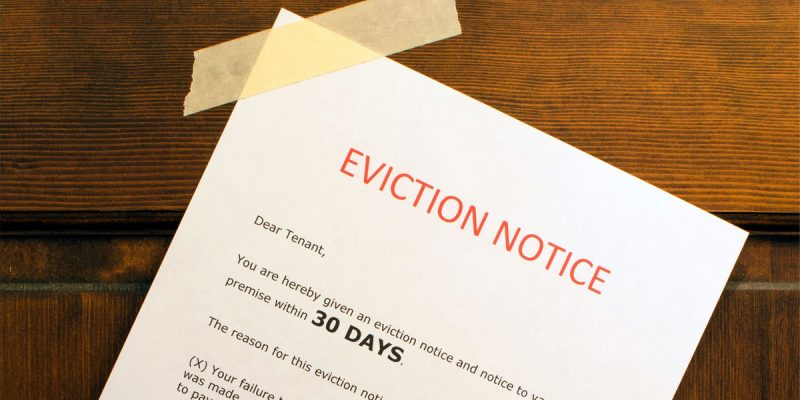 This is an amazingly difficult question and highlights the critical but tenuous relationships that capitalism depends upon. By its nature, our constitution and statutes would favor the landlord and by default the bank and government. After all a lease is a promise to pay and a landlord is entitled to protection under the law for his investment. That is clear, but then, in response to public outcry, the political nature of government has gotten involved as governments have imposed moratoriums on eviction.

Are these legal? Well under some circumstances they may be, but government has deep pockets and landlords do not have the resources to challenge them anyway, so the moratoriums stay in place until the whole system improves or collapses. Are they moral? Clearly innocent people are being hurt by the crisis, but, if because of government over reaction the entire economic system fails, the innocent would be hurt exponentially more.

These are dilemmas that cannot be addressed simply by doing what feels good. Our economic system has evolved into one vast network based upon contractual relationships that by tradition and law must not be artificially interfered with. There is a reason for this, ours is an evolutionary economic system that works extraordinarily well for the vast majority of citizens. By destroying contractual relationships when imposing artificial moratoriums, government interferes with the natural order of commerce with little regard for consequences. Caveat Emptor!

I am not here to debate the moral justification of government’s role in this way, I am here to say that we are rapidly approaching uncharted territory that could lead to an economic crisis of unknown proportions. In modern history it has only been in times of total war that whole segments of any capitalist country’s economy was literally blasted out of existence, and after the events it took decades to rebuild those economies. In 2021 America many segments of our economy have been blasted away. Who knows what may come?

Now one could say that the Great Depression was just such an American event, but not so. Without misguided government interference the Great Depression would not have been Great at all. It may have been a deep depression, but nothing like what it turned out to be. But there is a lesson in the misery of the 1930s. And that lesson is that when government goes too far in trying to help the natural order of the economy, it creates disaster. And, as in the 1930s, a repeat of such a disaster would largely impact our weakest citizens in urban areas.

Perhaps we are catching a glimmer of just such disaster about to unfold. Worst case scenario, government moratoriums end, there are mass evictions, landlords cannot find anyone who can pay because jobs are scarce or pay little, banks call loans but landlords cannot pay, governments demand taxes but landlords cannot pay, the whole residential rental system collapses. Homelessness skyrockets, banks fail, no one can borrow because other banks become nervous and demand high security, crime and mayhem explode, the rest of the economy starts to collapse.

I said worst case scenario, but here is a more likely scenario. Landlords already know they cannot replace tenants, so they do not evict. Instead, they go to the banks and tell them they need relief or in the alternative they tell the bank to foreclose. The banks do not want worthless property, so they grant relief. That buys time for the economic crisis to pass. In effect the banks end up taking a hit because of government’s decision to kill jobs and to prevent evictions. Except what most people do not realize, if the banks had previously been profitable, they can probably write off some of their losses against earlier income. So, in the end, the US taxpayer foots most of the bill.

This scenario is what happened in New Orleans in the 1980s, in response to another form of government intercession, international upheaval. Permanent disaster was averted because the US economy was strong, and after a decade it carried New Orleans along. But, since then, the New Orleans’ economy has been in a slow decline, leaving economic misery in its wake.

The national question in 2021, especially as relating to urban areas, is how long after government interference will a recovery take? And will the cities ever regain economic viability after such trauma?

As we enter 2021 there is great danger in a liberal government going one step too far in its desire to insert itself into the vast economic machinery that is our capitalist system. If government, overcome by political pressures, shatters the delicate contractual relationships that allow the economy to work, we can expect outcomes resembling the 1930s to reappear.

Be aware, when government goes too far in trying to “help” people, it ends up destroying lives and livelihoods. Do not believe me, just look back at the history books of the Great Depression. A great example of government trying to do what its not intended to do.