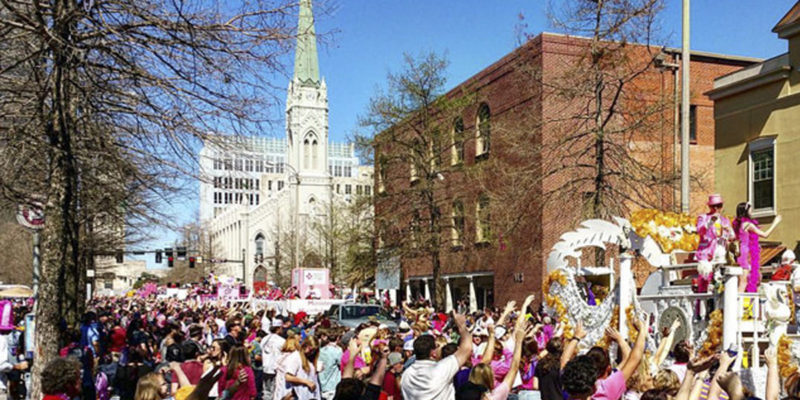 In case you didn’t get the message that Mardi Gras is really and truly dead in Louisiana, yesterday it was announced that the Spanish Town parade, which is Baton Rouge’s rather low-brow, satirical and often delightfully boorish truck-parade answer to the pageantry of New Orleans’ finer krewes, won’t be rolling in February.

Amid ongoing COVID-19 concerns, the 2021 Spanish Town Mardi Gras parade won’t roll through downtown on Feb. 13, after the city-parish did not approve plans, board president Robert King tells WBRZ.

While officials hope to reschedule the 41st installment of the pink parade later in the year, it’s unclear when that would be.

As other Baton Rouge Mardi Gras krewes, like Orion and Southdowns, previously nixed plans for their 2021 parades, Spanish Town officials had been holding out hope.

Earlier this month, King requested a meeting with Mayor-President Sharon Weston Broome to discuss holding an altered parade or event. In turn, he was told Spanish Town organizers needed to turn in a written plan for safer alternatives.

For Spanish Town, that parade plan included lengthening the route to allow revelers to spread out, cutting the number of floats in half, and requiring float riders to wear masks and gloves.

Should a parade not be possible, King also recommended a second option: a non-parade, public event in Spanish Town that included Mardi Gras themed house decorations, similar to plans by Mid City Gras to hold a ‘reverse parade,’ an idea that had been discussed with the Historic Spanish Town Civic Association.

King envisioned a festival-like atmosphere, with food trucks lining portions of the route.

Interestingly enough, or perhaps completely unsurprisingly enough, there are people gushing with joy over the fact the parade won’t roll. When the Baton Rouge Advocate posted a story on Facebook yesterday about the cancellation, here was a representative sampling of the reaction.

You’ll notice it wasn’t just COVID Karenism at work among these people. Cancel culture is alive and well in Baton Rouge.

There were also a lot of people protesting the overreaction to COVID and the loss of individual freedom, and they commonly found themselves being accused of wanting to kill Grandma. That’s just 2020.

But what’s also 2020 is the open hostility to an institution which has been around for a long time, and specifically an institution which has existed to poke fun at political leaders and other elites. The Spanish Town parade is, for all its faults, one of Louisiana’s most muscular celebrations of free speech. And rather than engage with it here you have people celebrating its demise because they think some of the floats are “racist.”

Which begs the question: how come there isn’t an explicitly “anti-racist” parade? Is it because the “anti-racist” crowd isn’t capable of putting one on? And if not, why not? Is that incapability proof that the “racists” are right, or is it evidence that maybe the Jay Nettleses of the world, who can’t tell the difference between an epitaph and an epithet, have better things to do than bitch about somebody else’s attempt to entertain them?

Maybe at some point the Spanish Town folks will decide the “anti-racists” are right and stop even bothering. We’ll all be worse off for it if they do, and it has nothing to do with COVID.

Interested in more news from Louisiana? We've got you covered! See More Louisiana News
Previous Article REED: A New Year’s Greeting From The LAGOP
Next Article GURVICH: On The Passing Of Luke Letlow