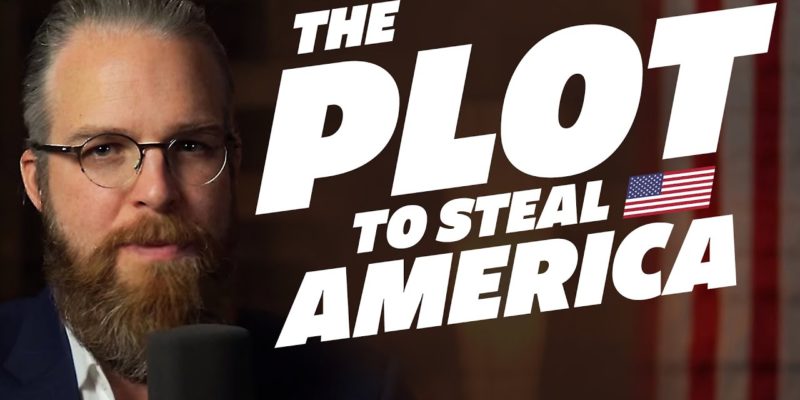 We’d never heard of Seth Holehouse before today, but he hosts a YouTube channel which goes by Man In America, and the video content therein is high-octane, hard-core patriotism with a heavy dose of reality.

Holehouse is actually a jeweler by trade, and the owner of an auction house until May of this year. Through that work he did a good deal of business in or with China, and apparently that experience opened his eyes to the pervasive and corrupting influence of the Chinese Communist Party.

You’ll see a good bit of that in the video, which is a compilation of sorts of all of the Twilight Zone-ish occurrences we saw in the 2020 election.

Holehouse points out that it’s China under all of these rocks. Based on the things which keep getting uncovered, and which for some reason don’t seem to be getting all that much attention from the legacy corporate media, it’s hard to say Holehouse is all wet talking about Chinese influence.

The evidence for that proposition abounds, and it can be seen in things not even present in the Man In America video. After all, the bizarre case of the NBA and its self-censorship after a Houston Rockets executive criticized the Chinese crackdown on Hong Kong late last year had to be a wake-up call that rather than America imposing its values on China as a result of our widening cultural exchange with them the opposite is happening. It’s very clear Hollywood is completely bought and paid for by China – last year when a remake of the famous WWII movie Midway was made, a seemingly-irrelevant section of the film covered the Doolittle raid on mainland Japan and the pilots’ having to ditch in China where they were protected by the Chinese at great cost.

The Midway remake was financed by people affiliated with the Chinese Communist Party. It was an anti-Japanese propaganda film disguised as a patriotic American movie.

Look harder and you will see Chinese influence everywhere in Hollywood. You’ll see it throughout the legacy corporate media. Bloomberg, for example, is little more than a Chinese front media company now. Its owner spends hundreds of millions of dollars pushing policies – gun control is a great example – that would make America a lot more like China.

There are Confucius Institutes in colleges across America which are funded by the Chinese Communist Party and exist to corrupt our higher education and indoctrinate American college students with Chinese cultural values. Is it surprising that so many young Americans place so little value on free speech and rugged individualism?

Everything about the Wuhan coronavirus smells of biological warfare. It isn’t known whether COVID-19 was a bioweapon deliberately released to destroy Western capitalism and free market economics, but the way the virus response has been orchestrated across the globe, with economic shutdowns that clearly do not work and which serve as wildfires to destroy small businesses everywhere while corporations carrying sizable Chinese investment and supply chain integration move in to take over market share, make it easy to see Chinese economic terraforming at work. Anyone questioning whether these responses are a good idea is immediately shouted down as a terrible person, in a manner not dissimilar to how Chinese dissidents are treated.

And then there is the penetration of our political class, which appears pervasive. The Eric Swalwell debacle and the Democrat Party’s complete nonchalance about it would seem to be a dead giveaway that at least one political party in America no longer thinks it’s problematic to be compromised by Chinese spies.

If you’re willing to turn over those rocks, you will shortly recognize China is waging economic, cultural and political war against us and we have barely even begun to fight.

But Holehouse’s video is a blow struck back at the Chinese. It’s just under 18 minutes and it is excellent. Watch it and get recharged for the fight to come.