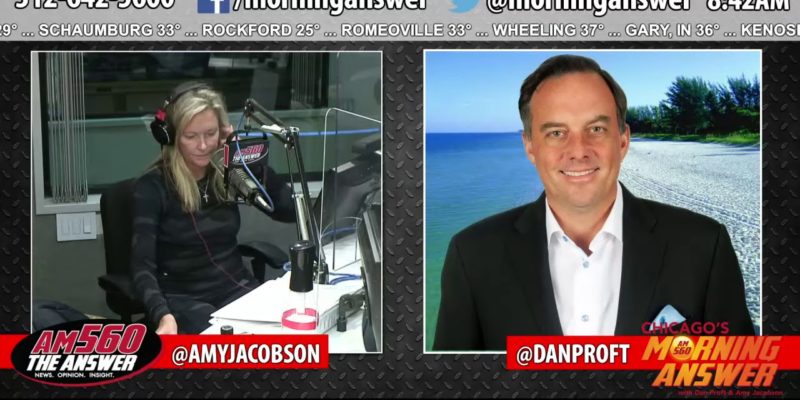 Our readers know I’m a regular guest on the Dan Proft show on 560 AM The Answer in Chicago, usually owing to columns I write at The American Spectator. But this morning I wasn’t invited on to discuss anything in particular that I wrote; this time it was event-driven. This time it was about that riot at the Capitol yesterday and the Big Tech/Big Media reaction to it.

Of course, I have a column up at The American Spectator on that subject. My take is that what happened yesterday was a trap which snared the President and his supporters and not only wiped out whatever momentum for fixing the manifest deficiencies in our electoral system the Democrats were able to promote and exploit but led to Trump being banned from Facebook and Twitter and the Left’s horrific bacchanal of backlash against conservatives today.

Proft and Amy Jacobson didn’t bring up the column, but a lot of what’s in it came up. We talked about the Big Tech censorship, the police shooting of protester Ashli Babbit inside the Capitol and how that’s going to be treated completely differently than police shootings like Alton Sterling, Breonna Taylor or Michael Brown that we’ve seen on the news in the past few years with the attendant civil disturbances, the Left’s reaction to her death which I compared to the stomach-turning reaction to the COVID death of Rep.-Elect Luke Letlow and the orgy of approbation and recrimination for the Capitol riot which issued forth out of the mouths of several Democrats in Congress when yesterday’s proceedings continued.

Dan and Amy are pretty pissed off. I can’t blame them; it’s how I’ve felt for weeks and it isn’t getting better.

Nevertheless, it turned out to be a pretty good segment. If you’d like to take a listen, here’s the clip…

Interested in more national news? We've got you covered! See More National News
Previous Article The Emmanuel Zanders Arrest Is Like A Scene From The Untouchables
Next Article The Cancel Culture Is Making Groceries At Rouse’s