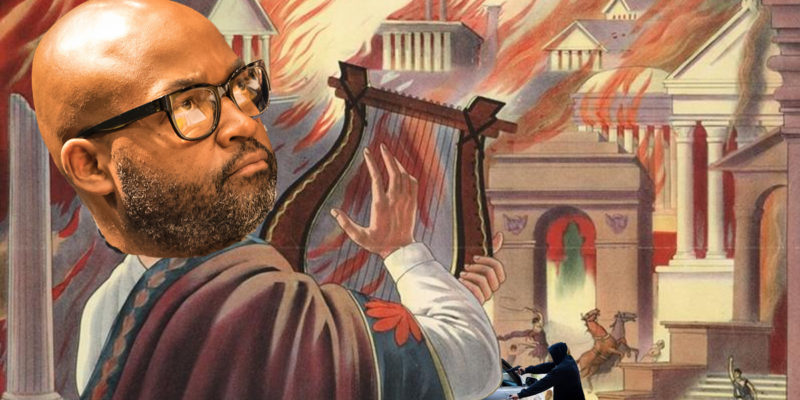 What else can you say about the Big Easy’s new DA Jason Williams, elected while under indictment for tax evasion thanks to a pot of gold from the pro-criminal Soros network and a campaign based on a promise to ignore pedestrian violations of the law? He’s celebrating criminality as soon as he takes office – wittingly or unwittingly.

Questions pop up after Jason Williams was sworn in as Orleans’ Parish District Attorney, Monday. A popular artist performing at the ceremony could be a possible conflict of interest for the new DA.

Behind a soulful and inspiring performance, Andrews has trial dates ahead of him as early as January 25th.

The popular trombonist played before and after the newly sworn in Orleans Parish DA Jason Williams spoke about getting to the systemic roots of crime.

”If you commit a serious crime to Orleans Parish you will face consequences, but in order to have the energy and resources to focus on these most heinous and harmful crimes, we will no longer clog up court dockets with cases that arise out of addiction and mental illness and homelessness,” Williams said.

Williams also took time to address the issues that correlate, like domestic violence.

”Violence is in our streets because we have for too many decades ignored interpersonal violence in our homes,” Williams said.

Ummmm, among the charges Glen David Andrews has been brought up on is…domestic abuse. That, and meth.

He’s also had three misdemeanor convictions and one felony conviction. They’re on his record.

”This is his first day. Let’s assume he didn’t know this,” Fox 8 Legal Analyst Joe Raspanti said. “It’s not in the best interest for that office to handle it anymore and I’m going to assume that maybe they’re going to recuse themselves and let the Attorney General handle this case but ultimately, it’s going to be the first or one of the many tough decisions that are going to have to be made going forward.”

It’s unclear whether or not Williams will recuse his office. The statement from the DA’s Office only says, “Andrews’ cases will be handled by the office in the appropriate manner, according to the law and office policies.”

Williams’ entire campaign was run on the basis of not handling criminal cases in the appropriate manner. He’s promising a Get Out Of Jail Free card to everybody in New Orleans for petty crimes. This amid a crime epidemic which involves gunfights in hotel corridors and wholesale carjackings, not to mention murder victims littering the streets of the city’s rougher neighborhoods. If ever there was a time for a vigorous crackdown on illegal activity in that city, this was it – and it’s exactly what the new DA says he isn’t going to do.

So why would anybody think Andrews won’t just be cut loose with his charges dropped when he plays Williams’ inauguration?

Oh, and exactly why does Jason Williams need a jazz concert by Glen David Andrews at his inauguration for District Attorney of Orleans Parish, anyway?

Isn’t New Orleans locked down due to COVID? Aren’t parties all but banned in the city, with a special number set up by LaToya Cantrell’s idiot cabal at the mayor’s office where people can narc on their neighbors for holding private gatherings?

Don’t you think that maybe Williams could have held off on the pomp and circumstance seeing as though you’re not allowed to hold weddings and funerals in that city if you’re one of the normal people? He’s taking office as the district attorney, for Pete’s sake, not the freaking king of the place.

New Orleans is already beset with the “Let them eat king cake” mentality of its political class, in which Cantrell throws a big party at Blaine Kern’s Mardi Gras World to celebrate epiphany after shutting down all other manifestations of the Mardi Gras season. Now you have a DA who thinks it’s appropriate to hire indicted criminals to play his inauguration party while the citizens have to pull all the shades before hosting their friends to watch the Saints in the playoffs.

It’s bizarre and it’s ridiculous. And it’s how you utterly, completely destroy a city.