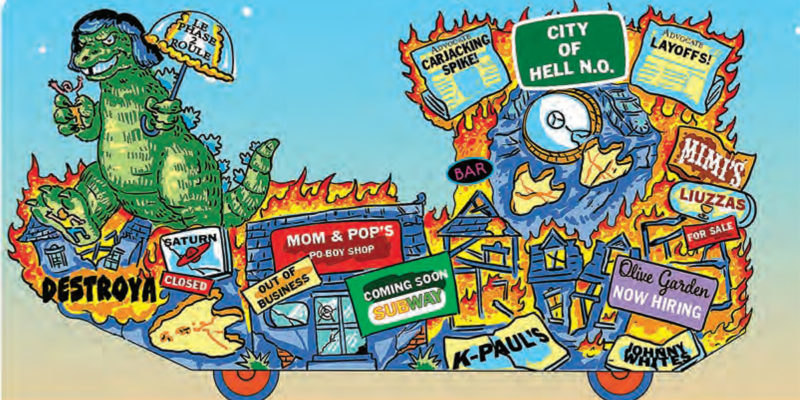 So I was sitting at my computer reading about how world champion pitcher Curt Schilling got screwed (again!) out of Cooperstown when a box popped up on my screen featuring a masked skull sporting a jester’s cap.

“Do you know who I am?” asked the jabbering skull?

“E.R.I.C. from Morgus the Magnificent?” I typed back.

“Dude, are you not seeing the hat?” sneered the skull, whose vacuous eye sockets flickered flames at my perceived impertinence.

“DEEP FLOAT?!” was my incredulous reply, recalling the mysterious figure who dropped wooden nickels to local scribe Angus Lind about advance word of the canvass-wrapped hulks of mockery that annually rumbled down St Charles Avenue, flaying the powerful from the Hill to the Hall to the delight of the hoi polloi.

“Bro, we’re in a new century and new era of presidential impeachment. Nobody not in AARP would get that “gated” reference,” scolded the skull with the belled chapeau.

“Besides Angus is like K&B, ain’t dere no mo,” said the cantankerous fleshless head.

“So who, or rather what, are you?” I queried to this mysterious cyber apparition.

“Just call us CarniLeaks. And I got scoop on one of the satirical krewes that had big plans for this year,” said the mysterious figure. “Here, take a look at this screenshot.”

“Hm. Why is there a picture of a woman with the word Muses over her head screaming at a cat with Iris posted above its chair?”

“Damn, wrong pic,” shot back the skull that had taken upon a blushing hue. “This is it.” 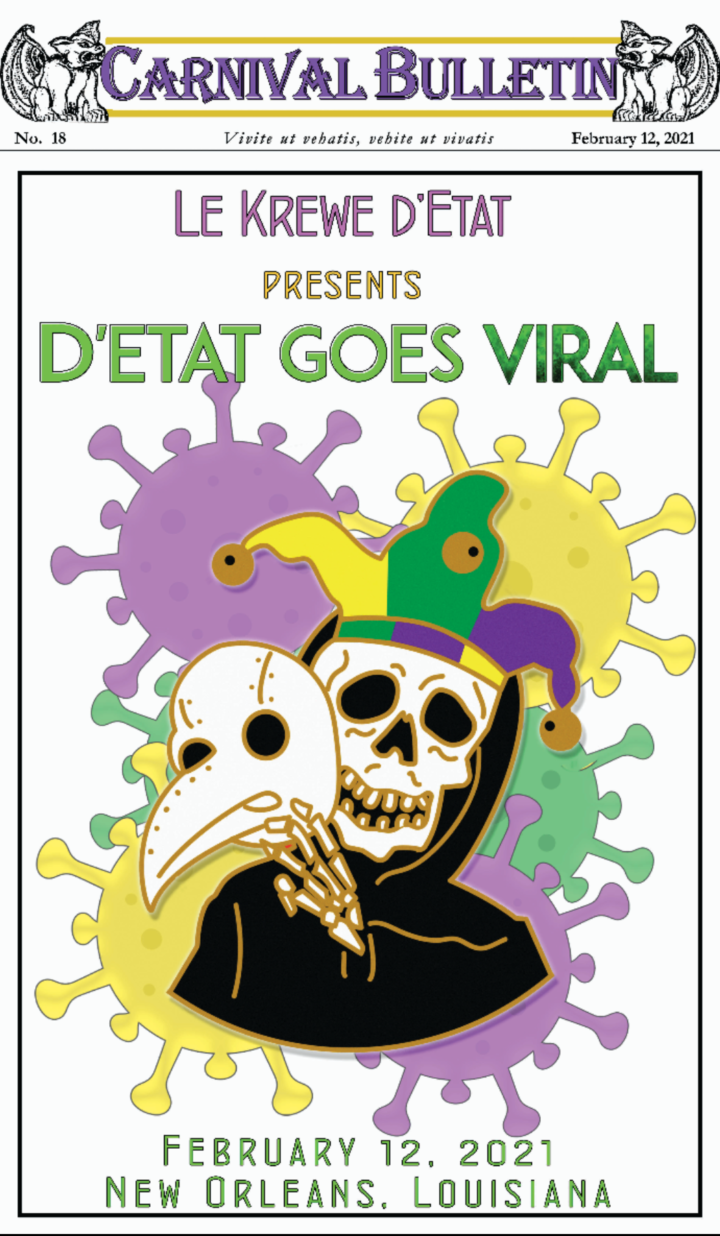 “Though the fellas live to ride, the show’s gonna go on in some format, even if literally on paper,” said CarniLeaks.

“To deprive the denizens of this burg its annual dose of satirical ridicule would be as unthinkable as nice roads in Lakeview.”

“We’re going to be planting these all over town at office buildings, restaurants, and sundry locations known only to the Dictator on Friday so folks can get the picture,” punned the skull.

“Known only to the Dictator? Sounds kind of arbitrary and nontransparent,” I opined to the now chagrined informant.

After the skull readjusted its mandible to my rejoinder, it replied, “Just read the damned bulletin already!”

Besides depicting the usual units such as the Dictator’s float and D’Etat’s signature Candy Wagon, the bulletin revealed sketches of eleven floats riddled with symptoms of the year’s infectious theme, including a unit that was a literal “float.”

The Rise of the “Nyx-ing Culture”, Nola’s most infamous COVID-19 era swap-meet, the “l-eaux-thsome” extracurriculars of a certain local sports figure, and “Blue” political privilege figure prominently in the Dictator’s grand parade plan that went awry. 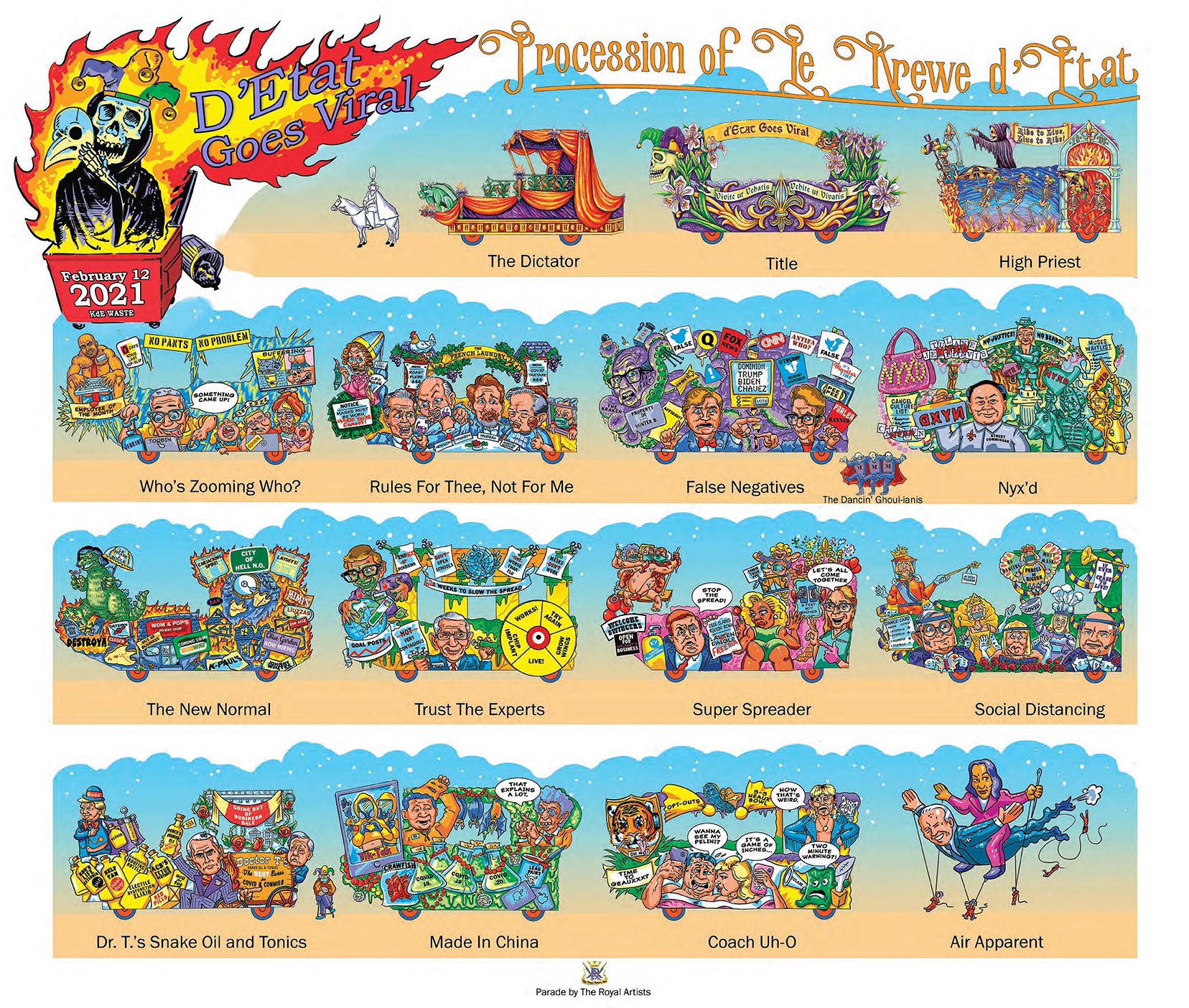 “We got a soft spot in our rib cage for our hometown guys who moved on to a place even better than Covington,” said CarniLeaks, hinting at a tribute to the on-screen alter ego of the late Sid Noel that makes an appropriate cameo on a science oriented float.

“However the most anticipated tribute was reserved for Her-zzonner,” the skull bragged, as the “Destroya” was depicted as a fire breathing monster leaving no functioning business intact along her wrathful maladministrative path.

The fun, or rather the poking thereof, was certainly bipartisan as the elixirs of a certain “Dr. T” and his loyal to many a fault enablers were thoroughly lampooned.

“You might have been hit with a court order filed by a certain ex-New York City mayor blocking that float from rolling,” I opined.

“Oh I’m sure Giuliani would’ve saved his objection for another feature of the parade,” grinned the skull.

“It’s like a Festivus on shoddy axels,” chimed CarniLeaks.

“Speaking about airing out grievances, that’s a nice balloon y’all got there,” I replied in admiration at the image of the very special friend of the still married former mayor of San Francisco riding her newest yet deflated horse of convenience to a new high.

“Yeah, we figure there’s a one in three chance that inflatable doll will still be relevant next Mardi Gras,” chortled CL.

“You think?” I countered.

“We’re optimists,” bantered CarniLeaks. “Hey I got to get rolling. These bulletins aren’t going to deliver themselves to Betsy’s Pancake House.”

“See you on the streets in 2022,” said CarniLeaks as the pop up box suddenly blinked off the screen, no longer obstructing from the view the baseball stats I had been previously studying.

Next year, on the Avenue.

Interested in more news from Louisiana? We've got you covered! See More Louisiana News
Previous Article The Destruction Of Baton Rouge By Its Politicians Has Begun
Next Article BERNARD: The Ties That Bind And The Anguished Cries Of Slavery