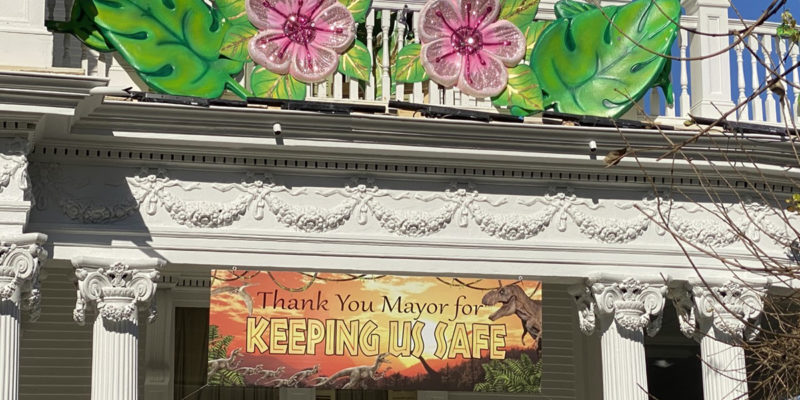 Prior to COVID-19, the last time New Orleans Mardi Gras as we know it was interrupted was during the infamous NOPD strike of 1979.

For years I had a tough time wrapping my brain around the thought of there not being a Mardi Gras.

It was just inconceivable.

Enter the most notorious import to come from China, ironically also the source of practically all of the beads and other non-coconut based trinkets tossed from floats.

Sure, severe weather has scrubbed more than a few parades over the years, but unlike even the police strike year, where the show went on in neighboring parishes, there were no parades, balls, or large gatherings anywhere.

Not even two hours east in the home of “Other Gras” in Mobile, Alabama!

Parades were unceremoniously scrapped via a city website posting in November whilst New Orleans Mayor LaToya Cantrell was ceremoniously bragging about her plans for listening sessions for a reimagined Carnival.

But despite its frivolity and excess Mardi Gras is also about ingenuity.

I mean, where else does one see a chair attached to an eight foot ladder?

And New Orleanians, New Orleans City Hall excepted, stepped up to keep the spirit of the season rolling even if the floats didn’t.

The Krewe of Jeanne d’Arc went first transforming their French Quarter walking parade into a drive-through tableaux featuring live action scenes of the saint’s life arranged within a west bank park on her birthday, January 6th, AKA the Feast of the Epiphany, AKA Kings’ Day, AKA Twelfth Night.

That same evening the only krewe to officially roll this season, the Phunny Phorty Phellows, did their annual streetcar ride through Uptown before fun got officially restricted this year.

The bawdy Krewe du Vieux “positioned” some of their biting representations across the city in a forerunner of what will be the one positive legacy of COVID Gras, the House Floats.

While people across the world go through pricey and elaborate decorating presentations for Christmas, the late fried chicken king Al Copeland having excelled at this art, locals went all out doing far more than hanging up some seasonal flags and store bought symbols of Carnival in front of their homes.

Partnering with float builders such as Barry Kern and Royal Artists, those with means and passion for Mardi Gras went all out, parking dinosaurs on their front lawns and affixing tentacles from their balconies that attracted throngs of admirers that backed up traffic on St Charles Avenue much as the Popeye’s founder clogged Transcontinental during Christmas in Metairie.

And as covered last week, the satirical Krewe D’Etat went forward with their annual bulletins that were a menu of mockery at a time when mirth was much in order.

King Cake sales were still brisk and local bakeries were selling out of their stock well before they closed for the day.

WWOZ pumped out Carnival tunes non-stop, infusing the air waves and the interwebs with the music of Mardi Gras and the eccentric and warmly dressed held vigil on neutral grounds throughout the New Orleans area, munching on fried chicken and waving at cars where Rex and Zulu floats would’ve rolled by.

And while Bourbon Street was locked down, every other street was loitered with costumed folks giving witness to a holiday that, to paraphrase Mayor Martin Behrman regarding another bacchanalian related activity, might be made illegal but can’t be made unpopular.

You can ban parades, break up Mardi Gras Indian gangs (seriously of all the gangs for the NOPD to be worried about- nobody in that kind of headdress is going to be carjacking anything that isn’t a convertible!), and turn Bourbon Street into Fort Knox but you can’t kill something that is more spirit than body.

Here’s to the future Jazz Funeral for the words Phase Two and the return to our beloved abnormal normalcy in 2022.