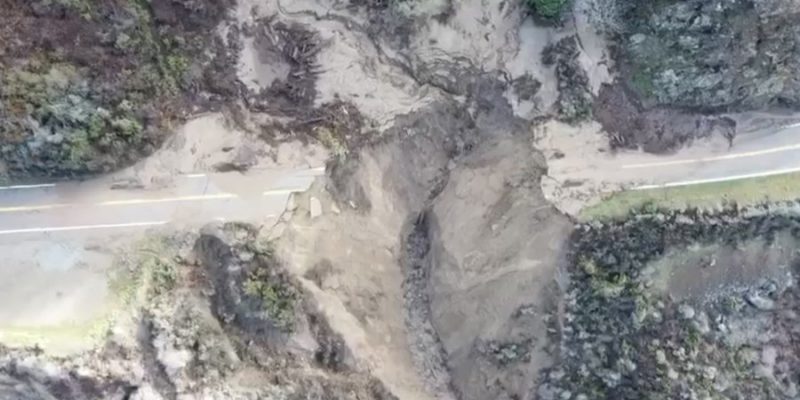 A large swath of California’s Highway 1 near Big Sur collapsed into the ocean after heavy rains caused a mudslide that crushed through concrete and rock.

The California Department of Transportation (Caltrans) Fifth District warned drivers of a closure on the road due to a “partial washout” near Rat Creek about 15 miles south of Big Sur. It is completely impassable and dangerous.

Debris that fell during the mudslide “overwhelmed drainage infrastructure, flowed across the highway, and eroded the road resulting in the complete loss of a segment of Highway 1,” the agency said.

CalTrans posted a drone video of the highway and mudslide that washed away a large portion of the hillside and road. It said its crews are on site securing the area and assessing damage. Crews have already begun clean-up and repairs. The road is open from Carmel through Big Sur.

Check out this amazing drone video of #Hwy1 washout at Rat Creek about 15 miles south of #BigSur. Our crews are on site securing it, assessing damage & starting clean-up/ repairs. Reminder: the road is OPEN from #Carmel thru town of Big Sur. @bigsurkate @BigSurCC @CHP_Coastal pic.twitter.com/rB193DzXhL

Toks Omishakin, director of the California Department of Transportation, said it could be several weeks before the highway portion is reconstructed, however. He also warned drivers to avoid the area of Monterrey and San Luis Obispo counties.

Some Impacts of #ExtremeWeather #SeaLevelRise in our state. Hwy 1 will be closed for several weeks due to this roadway slip. Avoid this area of #MonterreyCounty & #SLOCounty. Txs to team ⁦@CaltransD5⁩ ⁦@CHP_HQ⁩ ⁦@Cal_OES⁩ as they help lead recovery on this. pic.twitter.com/141ZCIuhL5

Mary Ann Carson, executive director of the Cambria Chamber of Commerce, expressed concern about how this will impact local businesses. She told her local news outlet, “All our businesses came through the spring, summer, and fall” because people “were desperate to get out of their towns.” Businesses were looking forward to visitors coming in February but that appears to be impossible now.

“We can’t take another year or two years of no traffic,” she said. “It would be great if the state would build a temporary road, maybe behind that hill, for people to traverse while Caltrans rebuilds the damaged section,” she suggested.

Interested in more national news? We've got you covered! See More National News
Previous Article Lee, Roy seeking to censure Alexandria Ocasio Cortez after she accused Sen. Ted Cruz of attempting to have her murdered
Next Article Want to watch television while eating outside in LA? Forgettabout it.