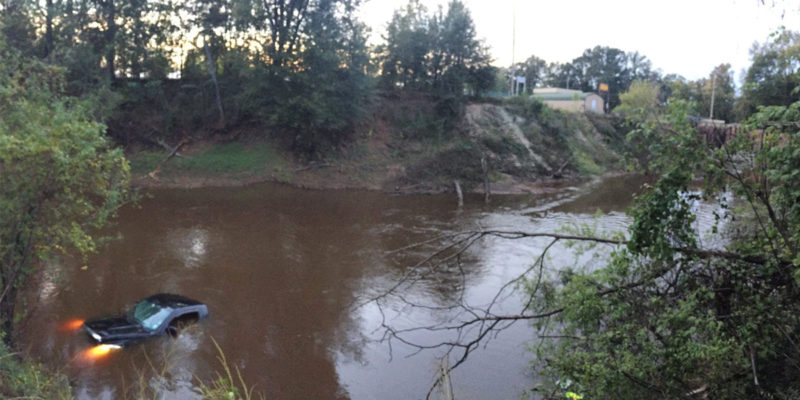 Taxpayers saw over $20,000 flushed down the bayou by an injudicious, if not illegal, decision by Republican 26th District Attorney Schuyler Marvin or somebody in his office. Will he reimburse his employers, with or without prodding by the Bossier and Webster Parish Police Juries?

Last year, a 2013 Toyota Sequoia was found damaged and half-submerged in Red Chute Bayou, accompanied by floating beer cans. Within hours, Bossier Parish Sheriff’s deputies traced the operator to Lyn Lawrence, a lawyer who practices out of Bossier City. But the vehicle was registered to Schuyler’s office.

Following ethical precepts, Marvin passed over investigation and potential prosecution across the Red River to Democrat 1st District Attorney James Stewart. Last month, Lawrence pled no contest to a charge of failure to report an accident, netting the 26th District a $100 fine and court costs.

One set of questions addresses why Lawrence had charge of the vehicle. He’s not an employee of the DA, and state ethics guidelines mandate that vehicles belonging to government agencies are used only for official business and by employees of agencies. State law prohibits loaning property of political subdivisions to individuals.

But he is a pal of Marvin’s, and a generous one. Lawrence, as an individual or through his firm, has donated prolifically to campaigns of local and state politicians over the past two decades, to the tune of almost $83,000. Although deputies questioned him at a residence in Elm Grove, Lawrence actually is registered to vote at a south Caddo Parish residence as a Democrat, and as such has donated not only to a number of Bossier elected officials and candidates but also to several Caddo and Shreveport politicians, mostly Democrats including Stewart, to whom he has given the second-largest amount to any individual, $9,500.

However, his personal friend Marvin has netted the most, $10,000, which appears to have qualified him for driving privileges of the taxpayer-owned vehicle worth, assuming 40,000 miles driven and in good condition, in the neighborhood of $21,000. When asked by the media whether he would seek restitution, Marvin’s office didn’t respond, supplementing earlier brushoffs when asked how Lawrence had possession of the vehicle at all.

It’s a question that both the Bossier and Webster Parish Police Juries also should ask. While the 26th District has its own sources of revenue out of which it pays for many expenditures – although as of the end of 2019 it has barely any funds reserves and if counting future and non-current, non-cash basis items it actually was $1.8 million in the red – both entities chip in money for the office’s operation through criminal court funds collected from a DA’s convictions in a parish. Webster also has a special asset forfeiture fund that supplements payroll and Bossier provides office space. And, technically, the office operates as a component of both parishes which ultimately makes them financially responsible for the office.

Oversight of the office should extend to the state level as well. For example, the state chips in $50,000 a year towards Marvin’s salary as well as the $30,330 paid by Webster and $43,433 forked over by Bossier (he also received benefits from each and salary and benefits from the 26th District to total just under $210,000 in 2019).

It’s one thing if in the course of official duties a district employee without any sign of negligent operation dumps the car in the drink, insurance then picks up the totaled mess, and taxpayers subsequently face higher insurance rates. But especially given the district’s precarious financial position, it’s another thing entirely to have someone unauthorized to drive a district vehicle do that and Marvin not try to recoup compensation from the person at fault to prevent higher insurance costs to taxpayers, regardless of any relationship he might have with the guy.

And Marvin needs to answer to constituents about how Lawrence was able to get behind the wheel in the first place. Almost six months have passed since the incident, more than enough time to establish the facts of the case, and whatever employee(s) allowed that to occur – including Marvin – should face discipline, followed by a public announcement that the matter has reached resolution, and how. Perhaps the Louisiana Legislative Auditor should become involved, conducting a performance audit to ensure that Marvin’s office follows rules regarding the use of public vehicles.

It’s unbecoming of a chief prosecutor sworn to uphold the law to dodge questions about potential ethics, if not legal, violations in which his office played a part. Bossier and Webster police jurors could help out their constituents by holding Marvin accountable through their fiscal oversight of his office to get such answers.