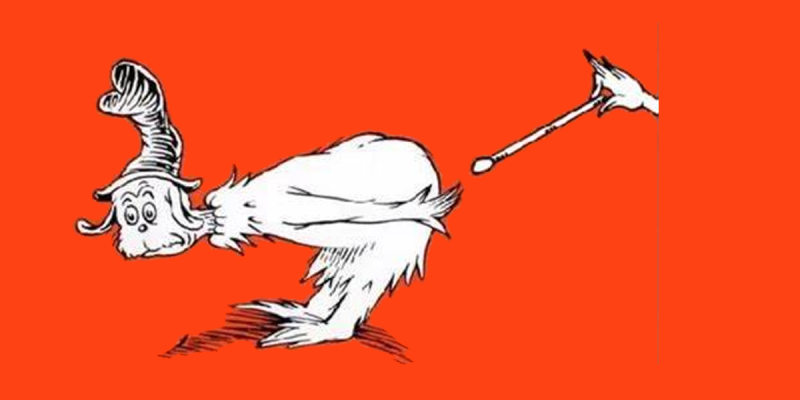 Whether you’re upset that critical race Grinches stole your childhood favorite author, or whether Horton hatched a giant nothing-egg of pseudo-controversy, a glaring fact remains:

Dr. Seuss Enterprises chose the author’s birthday to announce the removal of publication of six titles, and in the process managed to leverage a tremendous birthday present in the form of increased sales.

Outrage is continuing to stew. From widespread ridicule (with memes such as “There’s a Swab in my Thingamabob” being tweeted by U.S. Sen. Ted Cruz of Texas — perhaps a double play on China’s COVID-19 travel policy and the swabbing the publisher is taking as Cruz is a known Dr. Seuss fan) to the overreaction we’ve come to expect from social media giants (“fact checking” articles are often tagged to posts regarding the cancellation of the titles), it’s clear that generations of Seuss readers are incensed.

Our read on this situation is that it may not be the “cancel culture” win it appears as on the surface, but a calculated and shrewd maneuver by the publisher based on some classic marketing principles.

The origins of ‘Dr. Seuss Day’

March 2 is author and illustrator Theodor Seuss Geisel‘s date of birth, long-associated with a national initiative (presidential proclamations and all) to promote youth literacy. The day has eagerly been adopted by school libraries since its inception in 1997, giving Seuss titles beaucoups of earned media and exposure to its target market of children and their parents.

But this year was noticeably different. The day was marketed again as Read Across America Day but conspicuously without the Cat in the Hat as its mascot. This was in reaction to charges that some of Seuss’s less-than-iconic material may have racially discriminatory or distasteful content, and that women in racial minority groups are almost entirely absent from the illustrations.

You know the headline-grabbing story by now about as well as you know “Green Eggs and Ham:” Six relatively obscure Seuss titles were axed by the publisher, and seemingly out of nowhere.

Enter the National Education Association (NEA), America’s largest union and the creators of Read Across America Day. After a 20-year contract with Dr. Seuss Enterprises and the NEA ended in 2019, the Cat in the Hat became no longer the visual focus of the day. Guidance discouraging school libraries from equating Read Across America Day with Seuss’s birthday dates back to 2017 — around the time when the woke crowd began complaining behind the scenes and demanding evaluation of the content.

The NEA issued a statement this year doubling down on diversity, that the year-round program centered around March 2 is “about everyone, for everyone.”

“These books portray people in ways that are hurtful and wrong,” Dr. Seuss Enterprises said in a press statement on their highest of holy days. “Ceasing sales of these books is only part of our commitment and our broader plan to ensure Dr. Seuss Enterprises’ catalog represents and supports all communities and families.”

The “broader plan” is apparently working out for Seuss’s heirs.

Following the self-cancellation of the six books, sales jumped through the roof for the publisher, which already had raked in $33 million in 2020 ($16.5 million of that figure was book sales). After the kerfuffle, Thirty Seuss titles grabbed top 50 status on Amazon.com and “If I Ran the Zoo,” one of the banned titles, came in at No. 49. The day after the ban, Seuss’s more memorable titles had taken nine out of the Top 10, with the top 3 all being Dr. Seuss works. Scalpers took to eBay (before being banned from doing so) to sell copies of the scuttled books for up to $1,900 each.

The other banned titles include “And to Think That I Saw It on Mulberry Street,” “McElligot’s Pool,” “On Beyond Zebra!,” “Scrambled Eggs Super!,” and “The Cat’s Quizzer.”

Conservative reactionaries announced “buycotts” of the books to show their support for the content as it stood for decades —  raising questions from those who wonder why they would bankroll the very ones who cancelled publication of the six books.

Other questions surrounded the topic of why Dr. Seuss Enterprises did not immediately issue plans to release the titles with the controversial images redacted or removed entirely. (Do they not have Photoshop?) These may be questions that will only be answered over time … and amid increased book sales.

Kowtowing or ‘capitalism at its best?’

While mainstream media sources are praising the “inclusive” and progressive decision-making, at the heart of it may be a lesson in capitalism at its best.

Here are some points Dr. Seuss Enterprises may have considered in their decision-making, followed and some predictions of our own. See if they don’t pan out in the months ahead.

1) Assuaging the radical left. With around half of all revenue for Seuss Enterprises coming from book sales, it’s obvious the cooperation with NEA and school libraries is essential in crowning Dr. Seuss’s status as king of children’s lit. If no action was taken, Dr. Seuss would be in danger of becoming considered a relic in the eyes of the progressive-liberal leadership of the NEA and never regaining this primo arrangement in future years. Watch this relationship be restored by 2022, with or without a renewed contract.

2) Conservatives being a non-factor. Outrage among conservatives who feel the Cat in the Hat is kowtowing to the social justice mobs was inevitable given the last three years under the microscope of liberal academics. Whether it’s an outright cancellation of titles (which happened) or editing the content (which has yet to happen — see point 3 below) conservatives will holler about it one way or the other. They are apparently buying the books, anyway.

3) Future sales prospects. Rolling out the ceased titles in a revised form at some future date will result in another temporary boost in sales of both those curious about the changes and granola parents who are oh-so-relieved to have these titles in a politically correct form to share with their children. Before the controversy these titles were not well-known among Seuss’s works. Now they’re at least temporarily (in)famous. We can also expect a short-lived black market for the six books further driving their notoriety.

4) Creating scarcity. It’s Economics 101 that scarcity drives profits — even when it’s only a prediction of short supply. Consider, as mentioned above, those who were selling the books for $2k a pop and Dr. Seuss’s killing on the Amazon Top 50. A simple corrective statement, or announcing plans to revise the book in the future, would not have made for the feeling of urgency consumers felt last week and going into Week 2 of the controversy.

5) Word of mouth. There’s no better publicity than having people talk about your product, especially when it becomes a subject of water cooler conversation at work. Whether it was a positive or a negative impression that drove these conversations will be forgotten in time. But what will remain is the fact that Dr. Seuss is still a hot commodity. “No press is bad press,” as the adage goes.