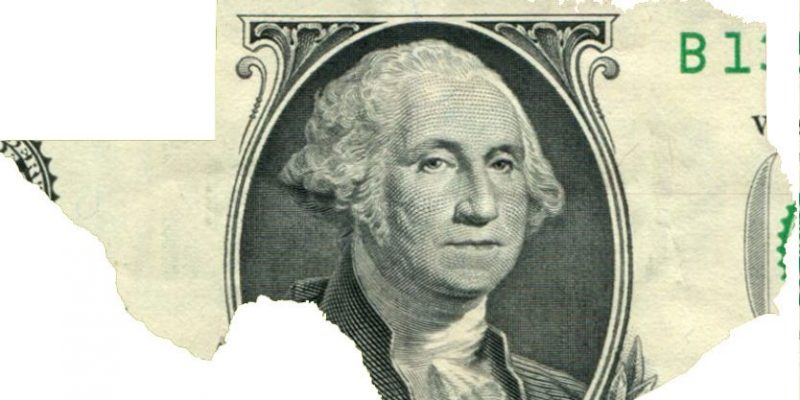 The annual gross domestic product (GDP) of Texas is $1.9 trillion, making it No. 2 in the nation for economic output — behind only California at $3 trillion (and dropping).

As such, the Lone Star State is the world’s 9th largest economy.

$1.9 trillion also happens to be the final price tag of the Biden stimulus bill, as the U.S. House of Representatives just approved it this afternoon following Senate passage Saturday.

The White House stated President Joe Biden is expected to sign the bill Friday, the cost of which amounts to 8.9% of the U.S. GDP (at $21.4 trillion — still the world’s largest economy).

The pork-laden and strings-attached bill sailed easily through the lower chamber, even as Democrats fought internally over whether even more should be spent. The vote was 220-211, with one Democrat joining every Republican in opposition.

From the hip: Once practically unheard of, “stimulus” packages have become much more common since the day of GM bailouts over a decade ago. Now Americans are banking on receiving their third stimulus check in two years. Safe to say, they have become “a thing” with the IRS referring to the checks as EIPs (economic impact payments) and sometimes on first reference.

The readiness of Congress to pass a stimulus package the size of Texas represents the triumph of Keynesianism, the economic theory that opposes the more classical approaches on how the economy works. The thought is that the economy can get “stuck,” and only the power of almighty government can dislodge a temporary recession and keep it from becoming a prolonged depression.

But there’s reality to contend with. According to a much-hyped study in November 2020, the U.S. is soon approaching a “tipping point” of national debt compared to GDP. According to this study, 77% is the limit of how much debt a nation can sustain in proportion to its GDP without prolonging a recession. The U.S. is at 84% and rising.

The study paints a a sobering picture, but as long as backers of U.S. debt expect to be repaid it’s unlikely the nation will go into default mode and lose its ability to easily borrow. Still, we have never seen this kind of domestic spending before, with trillions becoming “the new billions.”

Back to Texas. With Gov. Greg Abbott‘s order last week, today marks the official “re-opening” of Texas in the COVID-19 era. While there will still be restrictions in schools, nursing homes, and jails, and private businesses may still set their own policies, the effect the opening has on the economy will be interesting to watch as a large state case study.

Speaking of large states, Florida and California are often compared as counter examples of how states have succeeded or failed under COVID-19 restrictions — with Florida’s death rate higher than California’s under looser restrictions, but its economy faring much better than the Golden State. Out of the 50 “laboratories of democracy,” Florida’s and California’s cumulative COVID-19 death rates (however those are calculated) rank 25th and 29th, respectively, with Florida’s 11% higher, the Los Angeles Times reported. However, California’s unemployment is nearing 10% with Florida’s just over 5%. But only a longitudinal study in the years to come will show what the cost will be in terms of human life, health, and economic vitality.

That’s the left and west coasts compared. But now that the juggernaut in the third coast is open for business, we can evaluate what’s more powerful: a temporary injection of taxpayer dollars into an ongoing problem or allowing the taxpayers to go back to work.

We’re betting on work as the more effective “stimulator” of the economy. And with 70% or more of the U.S. GDP geared toward consumer spending, there exists a dam waiting to burst that is more than able to fill up all the dry valleys below. Comparatively, $1,400 (the amount the average American will receive from “Biden’s bucks”) is a vapor that will barely pay rent, groceries, and utilities for a single month, if at all.

Spending the entire economic heft of Texas every few months is not sustainable, nor can it become “the new normal.” Texas, however, may very well be the normal of the future if our economy is to remain strong.

Interested in more news from Texas? We've got you covered! See More Texas News
Previous Article Seuss Cancellation Does Annoy; Could Also Be Marketing Ploy
Next Article SADOW: It Looks Like The BESE Race In Northwest Louisiana Is Going GOP