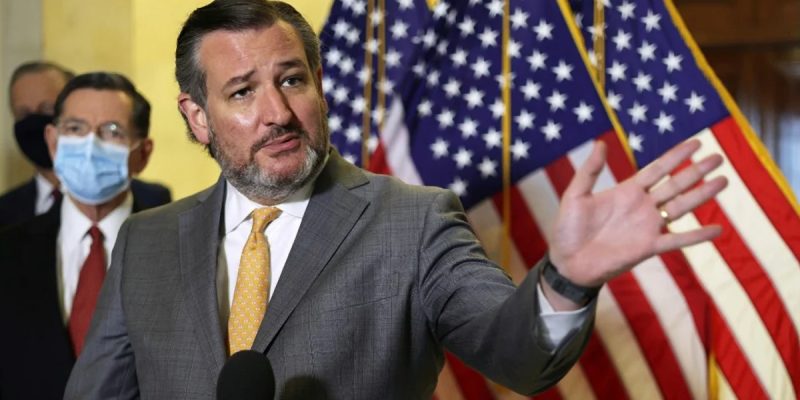 Cruz has a reputation of being a little too lawyerly and not “real” enough for a lot of people, and that had something to do with his not beating Donald Trump in the 2016 GOP presidential primary. It also had something to do with his lackluster showing against the ridiculous fraud Beto O’Rourke in the 2018 Texas senate race, in which Cruz won a 51-49 decision which should have been 10 points more to the good even despite all the money spent for O’Rourke. The Democrats blew $85 million trying to take out Cruz, but two years later they threw $100 million into Jamie Harrison’s attempt to knock out Lindsey Graham and lost in a landslide.

Harrison is now the national DNC chair. To think Graham is four points more popular in South Carolina than Cruz is in Texas is a little hard to wrap one’s head around.

So it’s perhaps understandable that Cruz tries to soften his image at times. When he was pilloried a month ago for evacuating his wife and daughters from blacked-out Houston to sunny Cancun during the Texas deep freeze, something which made absolutely zero sense at all, Cruz was somewhat meek in handling what was obviously a partisan-hack artificial outrage. And when Cruz attempted to agree with the idiot Alexandria Ocasio-Cortez in a rare instance in which she was correct about Wall Street abuses, he was met by an accusation that he had tried to have her killed because he objected to the irregularities of the 2020 presidential election and said so during the certification proceedings on Jan. 6.

Ocasio-Cortez wasn’t even in the Capitol when the crowd of demonstrators breached it, but she brazenly lied and staged a mawkish, melodramatic performance intended to convince the stupid and gullible that she’d barely escaped with her life. That included a calumny against a Capitol Police officer sent to protect her from the demonstrators; she made it sound like he wished her harm when there was no evidence to that effect.

And when the truth came out about that she was…unapologetic. To describe it kindly.

Cruz didn’t go to the mattresses against AOC and he largely shrank from the deep freeze/Cancun fake controversy. That said, he did give a killer speech at CPAC later, which showed that the fire still burns inside him…

But Wednesday, there was a moment that was almost a real breakthrough. Wednesday, as Cruz prepared to deliver a speech in a Capitol corridor about the border and the abject mess the Biden regime has made there, he was interrupted by a beta-male reporter who attempted to harangue him about wearing a mask as he spoke on television.

It’s the first 30 seconds of this video.

As you can see by the headline The Hill attached to the video, it’s reported that Cruz SNAPPED at the reporter.

That isn’t snapping. It isn’t close. Snapping is what we wish we would have seen in that case.

After all, Rand Paul annihilated Anthony Fauci the other day on the question of why people who have taken a COVID-19 vaccine are somehow still obligated to wear a mask. Particularly when there is no scientific proof that masks do any good in stopping the spread of the virus in the first place and particularly when vaccinations are entered into the mix.

Cruz wasn’t wrong in anything he said. His message was fine. We wish the delivery had been stronger. Something like this:

BETA REPORTER: Would you mind putting a mask on for us?

BETA REPORTER: It would make us feel better.

CRUZ: Then go take the vaccine. I did. So did all of these guys behind me. I’m speaking on TV, so no, I’m not wearing a mask.

CRUZ: I don’t really care what you think. I took a shot so I don’t need to wear a mask. That was the purpose of taking the shot.

BETA REPORTER: But the mask…

CRUZ: Like I said, I don’t care what you think. Your request is denied, and you aren’t going to die because I’m not wearing a mask to keep you from getting the virus I don’t have. I’m going to begin now, and you can be quiet until I begin taking questions, or you can get the hell away from me. Either way, I’m not going to waste my time placating you about the stupid mask I’m not going to wear.

Had Cruz done that, instead of what he did, two things would be true. First, the negative press and “fact-checking” he would have received for being rude to the COVID Karen beta-male reporter who mugged him over his not wearing a mask, which was by the way absolutely not done in good faith for the reasons the reporter gave (making the gaggle of Democrat activists disguised as journalists feel better isn’t even remotely a real thing), would not have been any louder.

And second, Cruz would have unleashed a moment worthy of a great Hollywood film to the American people making him the voice of ordinary folks sick and tired of being browbeaten over masks and other infringements on civil liberties proven to offer zero protection against the Chinese virus.

If Cruz wants to enter the 2024 presidential sweepstakes, he’s going to want a moment like that. He’s going to want to place himself back in the cultural conversation as the unbridled, doesn’t-give-a-damn-about-what-the-biased-media-thinks conservative who’s been through the wars and survived them in the 2024 race.

We’re asking too much here, because this is obviously one of those moments where you get taken by surprise and presented with such a ridiculous, obnoxious request that you don’t know exactly how to handle it. Even somebody with as much media experience as Cruz has had can be hit-or-miss in dealing with such a moment and might not quite be ready to hit it out of the park.

But America badly, badly needs a moment when a Ted Cruz or somebody like him, fresh off a last couple of months in which he’s been unfairly calumnized and abused in the media, lets loose and torches somebody who absolutely deserves it in front of the whole country over something that matters to everyone.

Joe Biden, in his scripted Potemkin press conference Thursday, bragged about having doled out 100 million doses of the vaccines in the first 59 days of his presidency. Biden shamelessly took credit for that, despite the fact it was set in place by Donald Trump. But the point of the claim was that the vaccines are here and they will enable America to go back to normal.

At least, that’s the whole point of encouraging Americans to take the vaccine.

But if you take it, and you’re still accosted by wimpy beta queens like the one making demands on Cruz over whether you wear the mask, with the justification that even though you’ve been vaccinated and thus cannot transmit the virus it would make him “feel” better to see you wearing it, then what’s the point?

That was Paul’s point during his grilling of Fauci – this is all theater. Fauci bristled at that, but he wasn’t fooling anyone. And Cruz’ tormentor made it abundantly clear that Cruz was obligated to engage in that theater.

We’d like to see some theater, all right. Just not the kind the control freaks and Karens are asking for.