So says US News, which has dropped Louisiana to the bottom of its annual state rankings.

Louisiana was 50th in the publication’s Best States rankings in 2019, and nothing has changed. That makes sense, since nothing positive has happened in Louisiana over the past year that would alter its ranking.

Louisiana was 50th in the 2018 and 2017 rankings as well. In fact, Louisiana has ranked worst in the US News state rankings since John Bel Edwards has been its governor. To be fair, there have only been four years where those rankings from US News have been published, so perhaps the state’s last-place finish isn’t something Edwards created.

But he certainly hasn’t fixed it. And in talking with business and political leaders around the state there are scant few who believe he will. The frightening thing is, nobody particularly believes it’s even fixable by anyone right now, a level of despair the Bayou State can’t afford. Unfortunately, there doesn’t seem to be much energy in the heavily-Republican legislature to do anything to spark positive change.

In none of the categories US News uses to compile its ratings does Louisiana rise above a pitiful 42nd – that ranking came in “Fiscal Stability.” In everything else, Louisiana ranks in the bottom five. 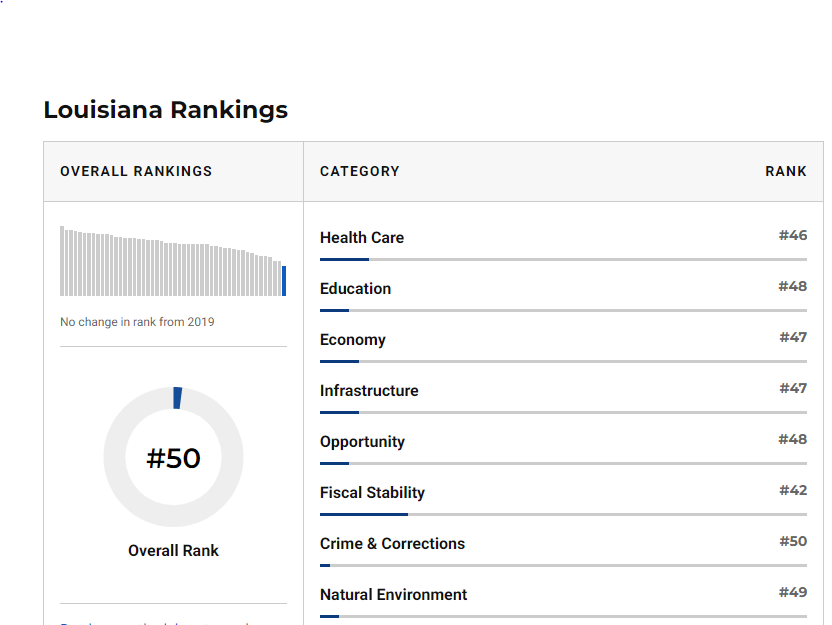 Louisiana is the only Southern state currently losing population. Louisiana lost 13,000 people last year, almost half a percent of its population. Most of that comes from a lot more people picking up and moving out of the state than are moving in. We don’t yet have the most recent year’s net outmigration numbers, but Louisiana has been losing more than 25,000 people on net every year since Edwards was inaugurated, and it’s very likely the newest numbers will show an acceleration of that trend.

They’re tired of dysfunction and they don’t see it ending. So they’re leaving. And without them Louisiana will continue to bring up the rear.

Interested in more news from Louisiana? We've got you covered! See More Louisiana News
Previous Article SADOW: Edwards Takes On Catholic Church Over Morally-Compromised Vaccine
Next Article Louisiana Should Reject Biden’s Billions And The Strings That Come With Them