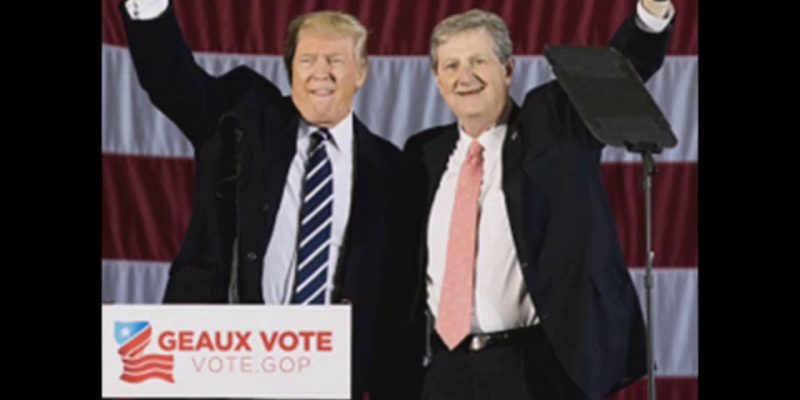 Given that the 2022 federal elections are more than 18 months away, it seems a little strange that we’re talking about an endorsement in one of those races. But given the jockeying for control of the Republican Party which is going on at present, it actually makes a lot of sense to see people lining up into different camps within the GOP.

Not that the much-ballyhooed civil war inside the party is a particularly serious thing. It isn’t. There is probably more unity of purpose within the party now than there has been in a long time. The GOP was remade by President Trump into an unapologetic nationalist party – America First in foreign policy, highly capitalistic but focused on small businesses rather than corrupt oligopolistic corporations, focused on preserving traditional American culture and values against the woke cultural Marxist crowd, anti-elite in matters political, cultural and legal and determined to root out government corruption where it can be found. Those elements translate to candidates far afield of Trump and it does not require Trump at the top of the presidential ticket to carry them forward, just as Ronald Reagan’s “three-legged stool” conservatism didn’t require Reagan.

But until a new generation of leadership in the party begins to carry the standard, something which might well begin to shake out in a couple of years when the 2024 presidential race gets going, Trump is the man at the top of the GOP. And he’s clearly making sure he stays there for now – whether as a once and future president or as a kingmaker to a Ron DeSantis, Mike Pompeo or Kristi Noem can be sorted out later.

In the meantime, Trump is playing kingmaker for the 2022 elections, which was in evidence when he endorsed Sen. John Kennedy for re-election next year.

“John Kennedy of the Great State of Louisiana is a spectacular Senator and person,” Trump said in a statement. “He is a tireless advocate for the people of his State, and stands strongly for the forgotten men and women of our Country. Strong on Energy Independence, the Military, our great Vets and the Border, John has my Complete and Total Endorsement!”

Kennedy isn’t likely to draw a challenge from within his party. He’s far too popular among Louisiana Republicans for that. Kennedy isn’t like Bill Cassidy, in that people doubt his adherence to conservative principles. There is no natural base of dissent from with a Kennedy challenger could come. His opposition in 2022 is more likely than not going to come from John Bel Edwards, who the national Democrat Party needs to run if they’re going to make a race at all (we’re not convinced Edwards will get in, but anybody else they’d run against Kennedy will crash and burn even worse than Adrian Perkins did against Cassidy).

So it’s a no-brainer for Trump to endorse Kennedy, and doing it now means Kennedy can get a bunch of early fundraising done in order to scare off opposition – from Edwards or anybody else.

And fundraising is what’s going on right now. Trump is fighting on that front with the RNC. If you haven’t heard, he had his lawyers send a cease-and-desist letter to the Party seeking to stop the RNC, the NRSC (National Republican Senatorial Committee) and the NRCC (National Republican Congressional Committee) from fundraising using his name or likeness. The RNC pushed back against that, which means Trump is now actively fundraising against the party.

Why do that? To prevent recurrences of what happened last year.

Consider Cassidy, who attached himself at the hip to Trump when he ran for re-election. Cassidy was the trumpiest trump who ever trumped in October and November of last year, but by January he’d never met the man other than to spit on him and vote for his impeachment.

The NRSC, for example, is committed to fundraising for Republican incumbent senators. That means a Cassidy and a Lisa Murkowski along with a Josh Hawley and Ted Cruz. Trump’s for the latter but not the former, and he’s not interested in the NRSC using his brand to push disloyal candidates in Senate races.

Particularly when the problem isn’t just Cassidy and Murkowski. There are a whole bunch of old-school GOP senators up for re-election in 2022 who have dumped out of running. Roy Blunt in Missouri is the latest, but Richard Burr (NC), Pat Toomey (PA), Rob Portman (OH) and Richard Shelby (AL) have also announced they’re quitting. In every one of those races to come there will be a GOP primary race likely pitting a young, aggressively anti-establishment MAGA conservative against a “moderate” old-school Republican, and in every one it’s more likely than not that the NRSC will back the latter.

Trump is dead set against having his name used against him in those primary races, particularly now that he’s getting his Save America PAC rolling to play in them.

Backing Kennedy is a way to get that race put to bed early and locking in Kennedy’s re-election so as to focus on winning GOP primaries in those open Senate races. For Trump to consolidate control over the GOP he’s going to want to have 26 Senators, or a majority of the caucus if the GOP wins more than 51 seats in 2022, who are on his side; to do that means he’s in a position to either co-opt Mitch McConnell or engineer his ouster as the Republicans’ Senate leader.

Trump is already more or less in a position of influence with Kevin McCarthy as the House’s top Republican, and McCarthy’s #2 man Steve Scalise has been on board the Trump train for a long time. But the House Republicans’ failure to oust Liz Cheney as their conference chair means there is still an element of reticence to the MAGA agenda in the House, and that’s why Trump is fighting the NRCC.

This is going to end up being negotiated in Trump’s favor, and he’s going to end up with a veto over the NRSC and NRCC’s endorsements in GOP primaries. One of the things Trump learned is that sticking with the recommendations of the GOP establishment in primary races doesn’t get him anywhere. It was a mistake which gave him Doug Jones in Alabama, as Trump joined McConnell in backing the ethically-suspect Luther Strange for the Senate special election to replace Jeff Sessions and that state’s Republican voters backed Roy Moore – when if Trump had supported Mo Brooks, a more natural choice, Brooks would likely have won both the GOP nomination and the race itself. And it gave the country Raphael Warnock in Georgia; Kelly Loeffler was an unappealing candidate the party establishment backed over MAGA congressman Doug Collins; Loeffler failed to energize Republican voters and lost the runoff to Warnock.

So now Trump will make those choices himself. And he’s chosen Kennedy. Which is a no-brainer.