This is more than a local story. It’s a local manifestation of something with an international flair; specifically an ongoing Chinese Communist Party information operation which is so widespread right now that people don’t even see it.

Louis Pizzolatto is a coin dealer in Lafayette, and, like most coin dealers and their clients he’s a pretty rock-ribbed conservative who doesn’t have much use for leftists. And like most people of Pizzolatto’s worldview, the Chinese Communist Party really doesn’t impress him much as to its morality and political propriety.

So he expressed that by putting up a sign which has as much marketing flair given the usual clientele as it has ideological passion. The sign in the window of Pizzolatto’s Coin and Treasure store says “Coin and Treasure proudly refuses admittance to any Chinese Communist MoFo.”

Which is a relatively harmless garden-variety expression which usually generates snickers if not the occasional “Hell Yeah!” from most of the people who would go into a coin shop.

But this has made the news, and for reasons both obvious and not so much so.

A sign on the front door of a business in Lafayette has received criticism and viral attention on social media for its alleged targeting of Asian Americans.

That sign has been up for more than a year and has recently been removed, but social media posts about the sign put up by Coin and Treasure on West Congress Street in Lafayette have attracted outrage online.

The sign on the business read “Coin and Treasure proudly refuses admittance to any Chinese Communist MoFo.”

“I was shocked that racism was so blatant and in your face. It’s wrong. Racism is wrong. You have to shine a light on it if it’s ever going to go away,” Belew said on the phone.

KATC also spoke with the owner of the shop, who says it was not meant as an attack on Asian Americans.

Louis Pizzolatto says that the sign on his business has been up since last year, around February or March, and is not related to the COVID-19 pandemic or recent attacks on Asian Americans.

“The sign was initially, in my mind, a protest against COVID,” Pizzolatto added.

But some, like Belew, are not convinced. She says, “It’s really hard to see it that way.”

If at this point you’re thinking this Kim Belew person is your typical Useful Idiot, you’re on the right track.

She said she was in Lafayette visiting a friend and saw the sign in the store window, but a quick perusal of her Facebook indicates she doesn’t have much of a connection to Acadiana. She’s a rabid leftist from Austin who apparently would keel over and die if she couldn’t spout vitriol at Ted Cruz, and she certainly seemed to get off on the media attention she got from her attack on Pizzolatto.

Which included the notice of a CBS News correspondent… 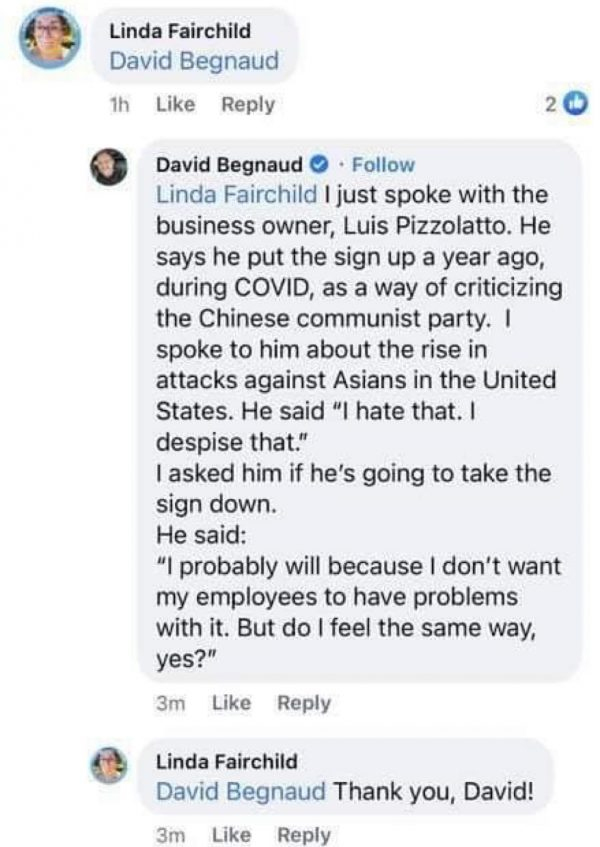 But the interesting thing is that the Lafayette radio and TV stations and the Advocate all jumped on this and did a story on what was essentially a Facebook post…that has all of 34 shares.

So you’ll know, 34 shares is nothing. When we do a Hayride post which only gets 34 shares on Facebook we’re scratching our heads trying to figure out what went wrong.

How did any of these media outlets even notice this non-story? The entire premise of it is nothing short of ridiculous, after all. The guy says he doesn’t want to do business with Chinese Communists, which is an awfully specific category of people. And it’s reported in the media as “targeting Asian Americans.”

That’s quite peculiar, don’t you think?

If you’ve been paying attention, moreover, you might have noticed there’s a lot of this going around – it began a year or so ago when suddenly any reference to the Wuhan virus or COVID-19’s origins in China was now “racist,” and you all of a sudden saw a multiplicity of references to “Asians” – particularly as an aggrieved group.

And lately, there is this absurd narrative which holds that there’s an epidemic of racist activity directed toward Asian-Americans, to which Pacific Islanders are apparently now appended.

As an aggrieved minority, it’s an awfully broad category, of course. Kazakhs are Asians. So are Uzbeks (Lily from the AT&T commercials is an actress named Milana Vayntrub, who is of Uzbek extraction and thus could perhaps be termed an Asian American). So are Pakistanis, Indians, Mongols, Thais, Vietnamese, Filipinos, Koreans, Japanese and Indonesians.

And, of course, Chinese.

Not all that long ago, people would use their nation of origin to describe their ethnicity. The word “Oriental” as applied to Chinese, Japanese, Vietnamese or Korean people was substituted in the event the specific nationality couldn’t be discerned, and that term was considered descriptive rather than discriminatory.

In the same way Greeks or Italians would be more satisfied with being described as Mediterranean rather than “white,” when they knew they had not much in common with Swedes or Irish.

Of course, there is a whole lot more diversity in the term “Asian” than there is in the term “white.” There are more commonalities within European culture than on the vast Asian continent. And it’s always seemed strange to think people from such a large diversity of geographical and cultural backgrounds would be interested in being lumped together as “Asian.”

It turns out there is a history here which matters, and it helps to potentially connect this ginned-up story of the anti-communist coin dealer in Lafayette with all of the other garbage that’s out there.

Nobody gave a fig about the term “Asian-American” before 1968. It was then that a radical Marxist Japanese American graduate student at Cal-Berkeley named Yuji Ichioka coined the term and founded something called the Asian-American Political Alliance. Ichioka later went on to become the star of the Asian American Studies Center at UCLA.

He was influenced in the formation of the AAPI by two sources. The Black Panther Movement was one. The other? The works of Chairman Mao by his own admission. Ichioka affiliated himself with the Japanese communist movement, which was a Maoist production – particularly after the early 1950’s. For more on Ichioka in his own words, see here.

UCLA’s Asian American Studies Center is one of the big backers of this “Stop Asian Hate” thing you’re seeing everywhere, and it’s funding from the state of California which is helping to make it happen.

It isn’t a coincidence that UCLA has a Confucius Institute on campus. Our readers are likely aware that the Confucius Institutes are funded by the Chinese government as centers of Chinese influence on American college campuses, so much so that the Trump administration took steps to shutter as many of them as it could. The one at UCLA never closed its doors.

We now know that the Chinese communist government makes use of online trolls to shape media narratives. They clearly did it where COVID-19’s origin was concerned. We know that China was involved in proliferating the Black Lives Matter narrative, which they proceeded to weaponize against American diplomats in Anchorage last month. We know that last year the Chinese consulate in Houston was raided by federal authorities, for a number of reasons among them being that facility was used to run an information warfare operation against the United States.

And now there is this campaign to stamp out racism against “Asians.” Which Chinese state media is doing everything it can to blame on Donald Trump and the conservative movement in America, and the news media in this country is enthusiastically furthering.

Most of the “hate crimes” against “Asians” in this country seem to happen in neighborhoods where there are decidedly few conservatives or Trump supporters, though. You might consider that perhaps one reason why Pizzolatto is being turned into a household name in Lafayette by the local media is that his “racist” anti-communist sign provides an opportunity to further that narrative. And of course that has to be seized upon given the relatively meager opportunities to do it.

This is worth watching, if it isn’t just a drive-by hit of a news story. If there is a sustained campaign to cancel the coin dealer, we’d bet it ultimately leads back to China and its communist party which has learned to use race and propaganda to sow chaos among Americans.