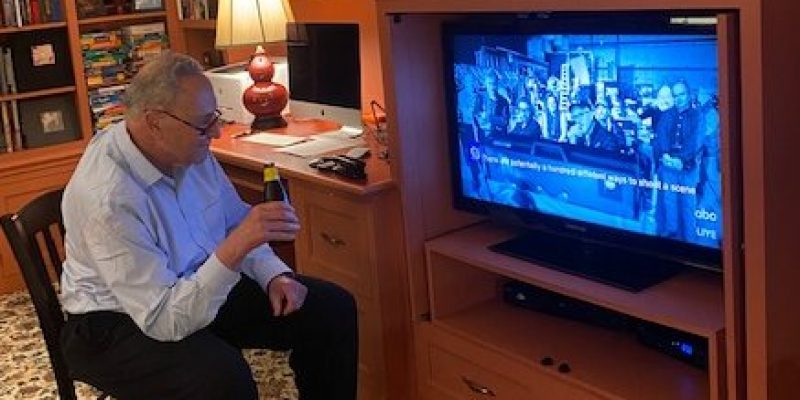 Ratings for the 93rd Academy Awards are out and they are outright abysmal.  the ratings were down 58% from 2020 confirming that probably not a lot Trump voters watched this years… award show which for decades has been taking a proverbial dump on anyone to the right of being a hardcore progressive.

The 2021 telecast emanated from Union Station in Downtown Los Angeles and it seems appropriate because the reports from those who actually watched the show for any length of time expressed on social media that The Oscars were a complete and total train wreck.  Entertainment publication Variety was not holding back the punches stating, “What was marketed as what if the Oscars were a movie? — the end result was more like, What if the Oscars were a glossy version of the Golden Globes but with more Black people in attendance?” Ouch.

Prominent Film critic Grace Randolph teed off on the Academy Awards on twitter calling the Oscars “low energy” feeling like she at her relative’s house.  She also tweeted, “The goodwill of the evening just went down the tubes,” after Cadwick Boseman got snubbed posthumously.

Then there was the critiques of the production itself.  Randolph tweeted, “Is the Oscars, going to be nonstop talking? No clips, no sketches?” While it shouldn’t be surprising that that Oscar winners would interject their brand of politics into their speeches even daring Middle America to change the channel. The format change itself had very little to be desired and thus the telecast had nothing to fall back on.  One of the biggest complaints is the Best Picture did not go last, and that’s suppose to be the “main event of the evening”

Executive Editor of Variety Steven Gaydos also critiqued the production.  He gave the production a D+ coming out harshly for “No support for film exhibitors. No music. No clips. Looked like Denny’s restaurant booths. Ending was a mess. Trivia game was disaster. ” While also stating “The awards themselves were ok and three or four speeches quite special. ” Other Tweets he compared the production values to home movies, that the Oscars became “Karaoke night at the Holliday Inn,” and “Seizing defeat from jaws of victory” because of baffling choices for the production.  Gaydos also joked that if the Oscars lose 60% of their audience two years in a row “we could be seeing the awards presented live from Wayne and Garth’s basement.  Then of course Ricky Gervais tweet out his 2020 Golden Globes intro with the caption, “It’s The Oscars tonight! I wasn’t invited. Was it something I said?”

Those were the tweets from entertainment industry professionals, the conservative pundits were even harsher.   Nick Adams tweeted, “Ricky Gervais was the greatest thing to happen to the Oscars” Philip Melanchthon Wegmann of Real Clear Politics tweeted on what was the point of Sen. Chuck Schumer sitting in front of a television to watch the Oscars sipping a plant based beer and thanking Biden.  Jack Posobiec of One America News tweeted that the “Academy Awards tonight looks like something right out of Hunger Games. Only worse”  Many people felt that could also be said for the Biden/Harris Inauguration.

What this points out is that Middle America was able to tolerate virtue signaling of the left to a degree if it was actually entertaining.  However the aesthetic coming out of Hollywood in recent years on one hand was over the top rubbing their wealth in Middle America’s face while at the same time looking cheap without the timeless grandeur that prevailed before the great recession.  People are sick and tired of the wokeness to the point that even those that are center-left moderates are beginning to sound like the America First Pundits.   At the end of the day it’s about results and the 2o21 Oscar telecast was such a train wreck no matter your political belief you called it a train wreck and turned it off.  Buck Sexton tweeted as much.  The quality just isn’t there.  Nobody in Middle America wants to see the celebrity as the virtue signaling liberal, they want to see them as the character they can pretend to entertain the audience by disconnecting from reality.  If not, they deserve to lose their audience and thus their source of revenue.  That’s how boycotts work.  It’s time for Middle America to take a page out of the lefts playbook and put our money where our values really are.