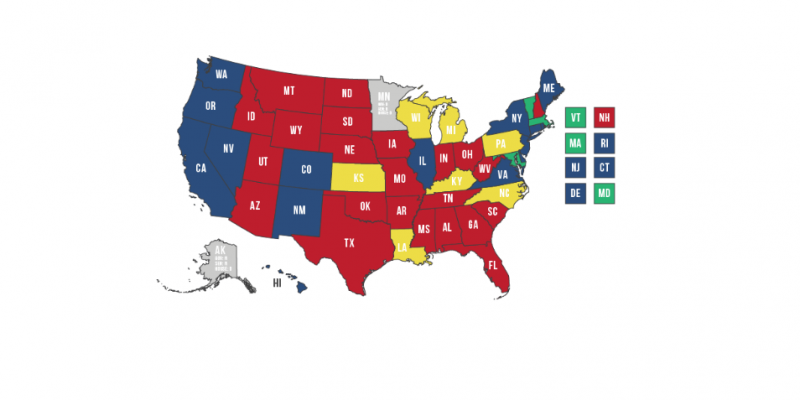 Though data for state redistricting purposes is delayed by months, the U.S. Census Bureau reported today that Texas is projected to gain two additional congressional seats, five states will gain one seat each, and seven states will each lose one seat.

In all, 13 states were affected by the shift.

From the hip:  If just 89 additional New Yorkers had filled out their Census forms, New York wouldn’t be losing a Congressional seat.

The Empire State may also want to consider their business-killing policies, which have sent New Yorkers packing to business havens such as Texas and Florida and have contributed to the red decade ahead (you read it here first). California, Illinois are also losing one seat each, which says everything about the overall trend. Need we remind our readers about the Texodus from Louisiana to Texas and similar scenarios being played out across the nation? Bad policy has consequences.
Though a couple of red states have lost representation in the House, it’s not just politics that drives a shift in apportionment.  Population loss can also be attributed to changing economic conditions, such as a downturn in domestic manufacturing and mining, which is definitely the case in West Virginia and arguably Rust Belt states Ohio and Pennsylvania.
Gains may owe much to states which attract blue state and Rust Belt refugees, but the Texas Tribune reports that a rising Hispanic population has much to do with the Lone Star State’s increased apportionment.
(For those who have forgotten high school government class and what “apportionment” even means, here’s the short version: the U.S. House of Representatives has 435 seats, based on population — a system set up by the U.S. Constitution. Every decade, Census data updates what’s called the apportionment, e.g. how big a piece of the 435-member pie each state gets. Shrinking states may lose a Rep or two, while growing states often gain a few. The U.S. Senate, of course, is locked at two members per state — part of a compromise in the drafting of our Constitution. The size of the House was finally capped in 1929. Class dismissed.)
For now, California is on top of the hill with 52 seats in Congress, and Texas now with 40 in second place. Texas has gained at least one seat since 1950 and at least two since 1980. That New York is in third place is old news.
Back to the 2020s: mid-term elections are around the corner, and we can expect this shift to greatly increase Republican chances. On top of having a Democratic President to rag on, Republican consultants are nothing short of gleeful at today’s Census projection. Keep in mind that the Democrats hold a very narrow majority in the U.S. House: 218-212. The five seats necessary for an even R-D split — if state redistricting efforts are in favor of Republicans, that is — could be harvested from Florida, Texas, Montana, and quite possibly North Carolina.
This is where state politics comes in to the picture: worsening economic climates in blue collar-heavy Ohio, Pennsylvania, and West Virginia may lead to Republican resurgences, which could translate to maps that favor Republicans and quite possibly the requisite additional Congressional Republicans necessary to achieve a GOP majority on Capitol Hill.

Now this doesn’t mean every district draw in a red state or a split state will be Republican. Texas, for example, may very well draw one new Republican district and one new Democratic district based on the demographic data. But regardless of how this eventually plays out, today’s announcement officially puts the Democrats on the defensive and puts the final nail in the coffin of Biden’s honeymoon period.

Bet on 2022 being one of the more colorful election cycles in recent memory.