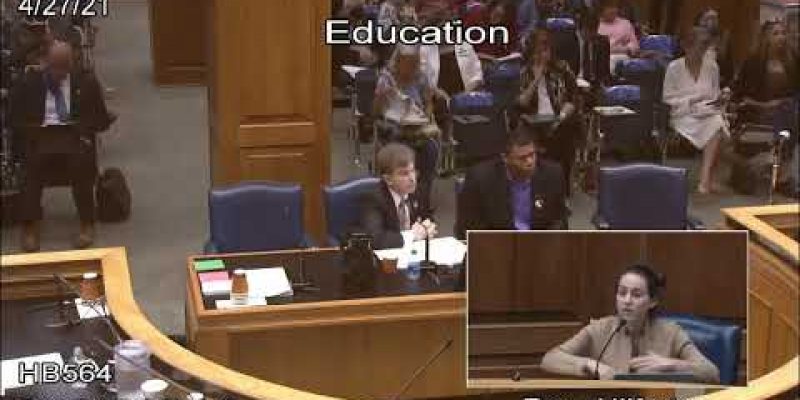 I heard Chairman Ray Garofalo’s testimony at the Education Committee Hearing during the discussion of the Critical Race Theory (CRT) bill, HB 564. From beginning to end, I was there as a part of the team making the presentation.

Let me say this, the institution of slavery was evil. Ray Garofalo said throughout testimony that, all history should be taught, the good, the bad, the ugly. After being pressed over and over on this topic of teaching history by Gary Carter who wanted him to answer that slavery and Jim crow was bad, a ploy used by CRT advocates to justify bigotry against whites today. Frankly, that was a distraction from what the bill is designed to do.

Garofalo brought up slavery when questioned by Stephanie Hilferty who seemed clueless about CRT, and during that time he repeated the “good, bad, ugly” construct without considering how it could be misinterpreted. There was no intention to stop the teaching of history or about the evils of slavery as can be seen throughout the testimony. I will say this, history is for us to learn from, and should not be used as a stick to beat people into submission or feeling guilty.

See for yourself whether Garofalo was promoting slavery, as he’s been accused of.

HB 564 is about stopping the teaching of Critical Race Theory in school that is being used to bully and silence many and calling for whites to be banished from society. I will repeat this, “IT WAS NOT ABOUT STOPPING THE TEACHING OF ANY HISTORY.”

If Stephanie Hilferty was paying attention, being honest or maybe she does not understand Critical Race Theory, no way could she have come to the understanding she has. She created a strawman argument like her colleague Gary Carter during questioning, making the bill about teaching history when it is about stopping racism on any subject in any classroom. Hilferty repeated this strawman argument in a recent CNN interview, which was an utter disaster.

I was part of the presentation, irrespective of the unfortunate sound bite this was not what chairman Ray Garofalo was trying to convey. Hilferty’s misconstruing of the facts behind words misuse of this event is shameful.

To those opposing CRT bill HB 564, is it ok to say these things about whites? “Whiteness is a public health crisis. It shortens life expediencies, it pollutes air, it constricts equilibrium, it devastates forests, it melts ice caps, it sparks (and funds) wars, it flattens dialects, it infests consciousnesses, and it kills people.”

This language was used during slavery to demonize blacks and was the driving force behind the rise of the KKK and Jim Crow laws. Are we to accept these teachings as a means to segregate whites? CRT is Jim Crow 2.0.

No one is addressing the levels of disrespect that happened to me during the CRT hearing.

Rep. Phelps” said during hearing “I don’t want to hear from you.”

That was offensive. WHERE IS THE OUTRAGE?

Rep. Carter walked OUT while I was speaking, and upon re-entry said “Am I gonna have to get up and leave again?” This because I was telling the truth about CRT.

I can’t let this go.

This is what Tim Scott addressed in his recent speech about how blacks are being treated when they go against CRT.