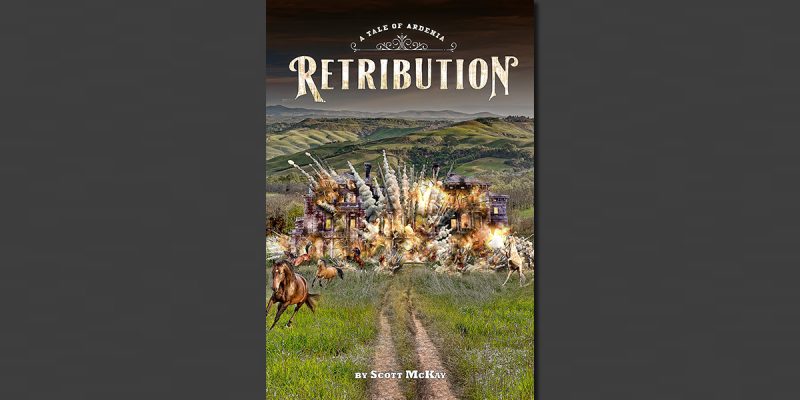 I recognize this is a little off the topic of politics, but the paperback version of Retribution, which is the third novel I’ve written in this Tales of Ardenia series of books I’m plowing through, is now out.

It’s the best of the three. Sales so far are, you know, OK. We’d like to change that, so if you’re looking for some summer reading this might be a great way both to support your habit and your favorite political blogger/scribbler of various and sundry things.

Yes, I will give you the Amazon link for Retribution. It’s here. But I’ll suggest another option to you as well.

Which is that on The Speakeasy, which if you’re a regular Hayride reader you’re probably familiar with (and if not, then click here and check it out), there is a Tales of Ardenia channel – at which all kinds of cool content surrounding the book series is being posted. In fact, the first 32 chapters of the 2nd edition of Animus, the first book in the series, are posted in serial format. In three weeks or so when the whole book has been serialized at the Tales of Ardenia channel, the 2nd edition of Animus will go to Amazon for print and e-book publishing. I made a few changes and enhancements to Animus for the 2nd edition, namely to add some character development and to push the action a little faster. Plus there are more cool maps.

You don’t need to be a Speakeasy premium subscriber to read the serialized version of Animus I’m putting there. It’s free. It’s just an extra bennie you get for signing up and using the Speakeasy.

We’re working on having signed copies of Retribution, Perdition and Animus available as an in-app purchase at The Speakeasy, though I don’t have an exact timetable for that yet. It’ll be soon.

But most importantly, now we’re going to get started with the Tales of Ardenia book app, at long last. Hopefully we’ll have that ready to roll this summer sometime. I expect it’s going to be pretty damn cool.

The point of all this is to set a marker down, because one of the things I want for The Speakeasy is that it turns into a place where authors come in and build channels to support their books, and you can subscribe to those channels and read inside the app – whether through a book app like the one we’re going to build with Tales of Ardenia, or by downloading audiobooks or ebooks, or even having the books serialized within The Speakeasy a bit like I’m doing with the 2nd Edition of Animus.

We talk all the time about how awful Facebook and Twitter are, and we also gripe about how Google is an evil company. But Amazon is every bit as bad as those others. It’s incumbent on us to build something that eats into their dominance as well, particularly in something like the book space where they’re somewhat vulnerable.

So that’s what we’ve been working on with the novels. Hugely proud of Retribution. Here’s the long and short of that one…

In Retribution, the third novel in the Tales of Ardenia series, many of the characters from the first two novels Animus and Perdition make continuing appearances – and the main story, that of the war between the Western-style industrial democracy of Ardenia and the savage warrior Udar people, continues.

It’s a story of politics, of business, of brutal combat and of love. In Retribution the reader is taken deep inside Udar society for a frightening glimpse of life as a captive among the barbarians, but also deep inside the machinations and inner workings of the Ardenian capital – where the political world new president Abraham Dees must navigate is no less perilous and savage. The book chronicles the rise of Will Forling as Ardenia’s unlikely military hero, Randall Thurman as an entrepreneurial star with a terrible secret to protect, Piety Forling’s bittersweet existence as both a worried wife and a business tycoon and Sebastian Cross as the deeply conflicted, yet fanatically-driven leader of the budding Ardenian Air Force. And Ned Mannion, the lovable gangster whose vision might just change the entire fortune of his country – or end in disaster.

As well as the terrible Udar villain Anth’an, who operates within the prophetic conviction that he cannot be killed by his enemies.

It’s a fast-moving, sweeping epic story that will make the reader reticent to put it down, and its characters jump off its pages to emerge almost as real-life friends and acquaintances. Retribution is the third book in the Tales of Ardenia series, with the fourth and final installment, Quandary, set to come in 2022.