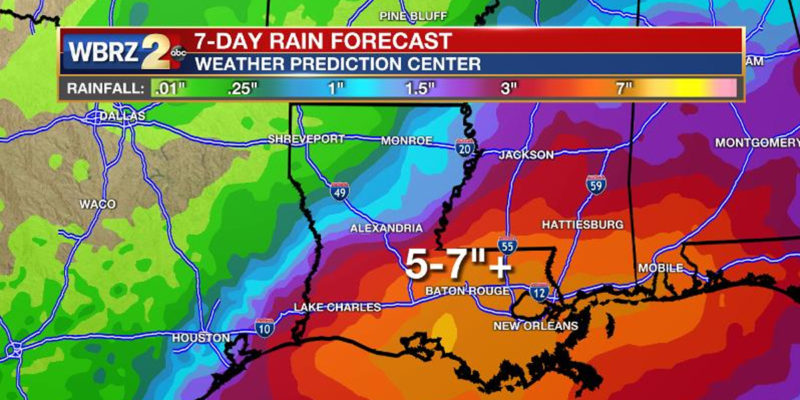 The forecast weather map above tells the story. Over the next seven days, and particularly this weekend, the Baton Rouge area is in for at least five inches of rain and potentially up to 10 inches thanks to a storm system forming in the Bay of Campeche which is expected to head north. And if that materializes, get ready for some flooding.

And yet, there is this…

Ahead of the rain this week, maintenance crews in Baton Rouge are digging out ditches and sucking debris from pipes. They’re fulfilling maintenance requests through the drainage department before storms.

People say it’s necessary since they’re worried about flooding again after May’s heavy rain that flooded hundreds of homes. This week is bringing up some traumatic memories they’d like to forget.

For the last few weeks, Amelia Chauvin has been working hard to repair her house after it flooded with four inches of water last month. While she says she might be more fortunate than others, she still can’t believe it happened since her neighborhood has never flooded before.

Now with more rain in the forecast, she’s worried about what’s to come, if something isn’t done to fix the problem.

“We’ve never had our catch-basins or gutter boxes cleaned out in over 10 years, and the tributary, I guess at some point when we recuperate from our loss we’ll probably get together and we’ll probably end up cleaning the tributaries ourselves,” said Chauvin.

Ward Creek runs behind homes in her neighborhood off Drusilla Lane. She says there is debris in there from the ice storm that hasn’t been cleared.

The City-Parish worked to dig out a drainage ditch on Normandy Drive Tuesday. Downtown Baton Rouge a crew vacuumed out debris from a problem spot there. Last week, it says it completed 80 drainage projects and continues to work through its maintenance requests.

Why is everyone so freaked out? Well, when 13 inches of rain fell on Baton Rouge on the night of May 17, all hell broke loose in town and nobody has forgotten about it…

Frustration from the owner of Mestizo Louisiana Mexican Cuisine has reached a breaking point.

This is the fourth time in the last five years that floodwaters have been inside the dining area.

“It’s time for action now,” said Jim Urdiales, owner of Mestizo. “People are tired. I’m tired of going through this.”

Urdiales is furious after his business was once again filled with water in a matter of hours Monday night.

“You can see that we’ve already pulled up the carpet. It went about two and a half feet in the restaurant. We’re going to have to re-do pretty much everything in the restaurant,” Urdiales explained.

The sheetrock in the restaurant will also have to be replaced, the food is thrown away, and the place is now forced to close for a few days.

“I’m tired of the doublespeak of politicians. I’m tired of this whole crap that, ‘Hey, we’ve got the money. Show me where the money went and I guarantee that it’s time for those questions to be answered by people right now,’” Urdiales added.

So, where is this money for flooding?

“We literally have a billion-dollar, excuse me, billions – plural – billions of dollars that’s in the bank today and it is for old projects that should have been built decades ago, like Baton Rouge or flood control, cleaning and clearing out a lot of our drainage canals,” said Graves. “And it is for prospective projects, meaning ones that we hadn’t even come up with yet. That all this money in the bank, billions and billions of dollars, and so, at this point, it’s really more of an execution issue than it is breaking through the bureaucracy or trying to find the funding, which are normally the holdups. Those things have all been eliminated in this case.”

East Baton Rouge Mayor-President Sharon Weston Broome admitted things have taken too long. She said projects are on the way to help reduce all of this flooding mess. But people and businesses are suffering during the waiting process.

“Progress is taking place,” said Broome. “But the truth is you’re absolutely right. It’s not taking place soon enough for the citizens that are being impacted.”

She said city-parish officials are cleaning culverts regularly and the pumps and drains are working. But that’s still not enough to handle all of that rain at once.

“All of our equipment is working. It’s the fact that we are having a deluge, a downpour, showers on steroids, whatever you want to call it, in a short amount of time, as we’ve never seen it historically,” Broome explained.

Broome’s explanation is the classic doublespeak that Urdiales was talking about – because when neglect of drainage infrastructure results in the citizens getting burned, the fallback is “Oh, it’s global warming.” As though that’s an excuse.

Getting 13 inches of rain in a day is not unprecedented. It’s rare. But a hurricane can come and deliver that kind of rain on a city without even being considered all that memorable. Hurricane Laura dumped that much rain around South Louisiana just last year.

What people need to understand about the Baton Rouge area, and almost nobody does, is that we don’t drain into the Mississippi River here. You’d think we would; the Mississippi is the biggest groundwater drain in North America. But it doesn’t have many tributaries this far south. Instead, Baton Rouge drains into the Amite River, which runs largely parallel to the Mississippi and forms the eastern border of East Baton Rouge Parish. The Amite then turns east below Baton Rouge and ultimately empties into Lake Maurepas south of Killian.

There is a diversion canal southeast of Baton Rouge which moves some of the Amite’s waters to the Blind River, which also empties into Lake Maurepas east of Gonzales. The Amite and the Blind are the drains for the Baton Rouge area, and they’re anything but major rivers.

Both rivers are silted up at their mouths. Neither has been dredged since 1956. Moving water out of the Baton Rouge area is therefore a lot slower process than it should be.

Graves posted this to Facebook a week or so ago…

Where are your drainage problems? We have been traveling around today and over the past several weeks talking with many of you about drainage and flooding problems. It is clear that there are problems all over south Louisiana. Some issues are related to leaves and litter getting into yards and streets — these block catch basins, ditches and canals (as seen in the pictures). In some cases, outfall pipes that were designed to drain our areas are too low in the canals — causing water to back-flow into our homes (as seen in the pictures). In other cases, it is canals, ditches, bayous and rivers that have not been properly maintained — filled with debris, trees, litter and sediment. We have secured a record $3,000,000,000 for the state and parishes to help address many of our flood/drainage problems. I’m not sure the funds are being put in the right places or executed with the urgency you deserve. The state has only spent a fraction of the $1.2 billion under a program we provided years ago — and almost none of this has been spent on actually fixing problems.

In an effort to help us identify the flooding and drainage problems for state officials managing these funds and some of the parishes working on this, post your pictures and the location of where water backs up.

There’s a contract out for dredging the Amite and Blind riverbottoms, but of course it’s backed up waiting for permits which will come – maybe – by late summer. Livingston Parish is using something like $9 million in GOMESA funds on the dredge project, and by August or September it’s set to get going.

The mouths of the Amite and Blind Rivers are so silted up that you practically can walk across both of them without getting your shirt wet. It’s decades of neglect which has created this problem.

And of course, in Baton Rouge nothing much has been done. The city-parish is out trying to do maintenance work on the creeks and bayous which flow into the Amite basin, but that’s like closing the barn door after the horses are already out. It’s too late, and the damage was already done last month. We’re just waiting on more flooding which is certain to come this weekend and on into the summer when another rain event comes.

And of course it’s a more severe problem now, because developers keep building on land that used to be flood plains or swamps. That isn’t a particular sin in itself, mind you; people build things in metropolitan areas. But when the political class and the bureaucrats are busy building libraries and dog parks and not drainage infrastructure, because they think a downtown library will mark a city as progressive and cool even if half that city is under water when a big rainstorm comes, a neglected problem only gets more and more unmanageable.

So now it’s a race against time to save what hasn’t already flooded. And if you’re in Baton Rouge and you’ve driven over or past the creeks and bayous draining the place, you know that a month after the May flood the water is still high and it isn’t moving.

Stay dry this weekend. If you can.