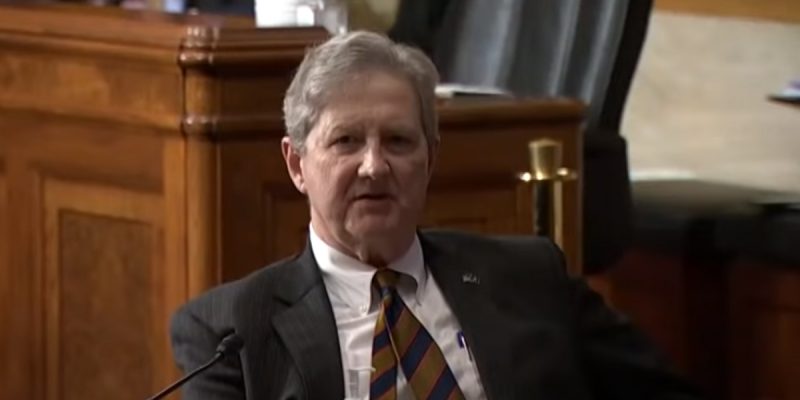 That it happened is hardly noteworthy; Kennedy was always going to run again. That he announced it today is a little bit interesting – it’s early, but on the other hand there have been a number of Kennedy’s colleagues, like Rob Portman, Richard Burr, and Richard Shelby, for example – who have already announced they’re done after the current congress.

He’s not done. He’s the most quotable member of the Senate and Kennedy has found his groove in that body.

MADISONVILLE, La. — John Neely Kennedy has launched his re-election campaign as U.S. Senator for Louisiana. Louisianians elected the Zachary native in 2016 with 61% of the vote.

“Five years ago, I made a promise, a promise that I took seriously. I told you that I would work to put our country back on track and make America great again,” said Kennedy. “In the last five years, we’ve accomplished a lot, but now the socialists are racing to undo it all. So, my job—our job—isn’t finished. Today, I’m announcing that I’m running for re-election for the United States Senate.”

“With this announcement, I want to make you a new promise: I promise that I will always be your voice during the good times and the bad. I promise I will be a voice against the socialism that’s now overtaken Washington, D.C. I promise that—come hell or high water—your values will be my values, and I will never be silent—never—when the nut jobs tell me to sit down and shut up.”

“I will not let you down—I’d rather drink weed killer,” Kennedy pledged.

With $9.5 million raised and over $7.2 million cash on hand, Kennedy’s fundraising operation is in full swing. The numbers come on the heels of news that Kennedy’s legislative wins made him one of the top 10 most effective Republican senators last Congress, according to the Center for Effective Lawmaking. A volunteer substitute teacher, former law professor and champion of job creation, Kennedy was the most effective Republican senator on the issues of education, commerce and trade.

Seven of Kennedy’s bills have been signed into law in his first term, including two extensions of the National Flood Insurance Program. By that count, Kennedy has been more productive than any first-term Louisiana senator since the 19th century.

President Donald Trump endorsed Kennedy for re-election this March, calling him “a tireless advocate for the people of his State” who “stands strongly with the forgotten men and women of our Country.” Louisianians cast votes for the U.S. Senate again on Nov. 8, 2022. Qualifying is set for July 20-22, 2022.

So who runs against him? No Republicans of note, that’s for sure.

But the Democrats are going to have to run somebody, even though it’s unlikely any real national money would make its way to Louisiana in an effort to knock Kennedy off. Not when he’s already sitting on enough of a war chest that it doesn’t even really work to try to make a race against him in order to make Republicans siphon off funds that would otherwise go toward other races like the ones against Raphael Warnock or Mark Kelly.

For a long time there was a good deal of speculation that John Bel Edwards would get in against Kennedy. But Edwards would lose, and probably pretty badly. It might make more sense at this point for Edwards to keep his powder dry until 2026, when he could then run for Bill Cassidy’s seat and perhaps against Cassidy with another Republican challenging for that seat. Taking on Kennedy is a suicide charge.

We wouldn’t predict it, but what we would absolutely love to see happen is for Karen Carter Peterson of Mandie Landry to run against Kennedy. That would make for a brilliant bit of political entertainment.

Neither of them have anything to lose. For Landry it might actually boost her visibility statewide, though taking a 60-40 thrashing at Kennedy’s hands would be an awful price to pay for name recognition.

Kennedy is in that seat as long as he wants it. Everybody knows this. Today’s announcement just made it more or less official.

Interested in more national news? We've got you covered! See More National News
Previous Article ALEXANDER: Critical Race Theory At The Louisiana Capitol
Next Article On The Supposed “Rift” Inside The LAGOP…