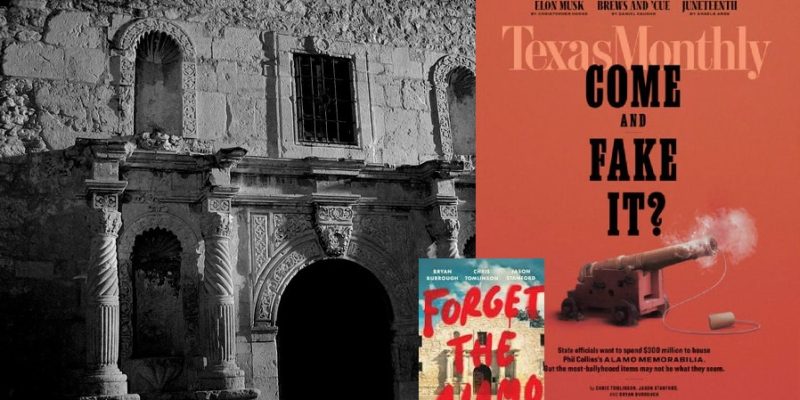 A motto synonymous with courage and perseverance — uttered by Texans since even before independence from Mexico — has been turned on its head by the title of a recently released book.

The book investigates the origins of the famed Alamo mission in San Antonio and its legacy. The author-trio dismisses much of the familiar story as a “creation myth” of a nascent republic and at times even a racist “echo of whiteness.” The book calls into question the state of Texas’s acquisition of Prog-Rock legend Phil Collins‘s expansive Texas Revolution artifact collection and the veracity behind many of the claims associated with the historical items, as well as the disbursement of $300 million to build a museum to house a large portion of them.

A plan to “reimagine” and restore the original footprint of the Alamo campus has been a subject of much debate over the past decade, and has fallen into many of the same controversies surrounding the preservation of Civil War monuments, critical race theory, and historic revisionism. In addition to a cover story, Texas Monthly reprinted a portion of the book for curious readers wondering whether the Alamo should be roundly criticized as a monument to racial supremacy.

But former Texas Land Commissioner and Alamo caretaker Jerry Patterson is not taken in by the hullaballoo. According to Patterson, several errors were made, particularly when it comes to his involvement with the groundbreaking acquisition. He pointed out in a letter to magazine editors numerous alleged mistakes and “misrepresentations” that cast a Texas-sized shadow of doubt over the skeptical tome’s level of scholarship.

“Texas Monthly isn’t to blame for what the authors wrote in their book, but they did publish it,” Patterson said to his Facebook Page followers, noting that Texas Monthly responded quickly and they hope to meet soon to discuss a corrective statement in August’s edition. “… My experience with Texas Monthly in the past in similar circumstances has always been positive. My below narrative is lengthy. However, if you’re sick and tired of the “woke” BS about Texas history, YOU MUST READ IT. It will give you the ammunition you need to spread the truth.”

We publish Patterson’s response in full below:

Regarding the “Come and Fake It” article in the June issue, I think the authors (Chris Tomlinson, Jason Stanford and Brian Burroughs) need to brush up on their fact checking skills. They erroneously assert that as land commissioner I agreed “to display a collection in its entirety without authenticating every item” and that I failed to “seek independent assessments of the Collins artifacts before or after promising to spend hundreds of millions of dollars on a museum that would display every single one of them.”

This is demonstrably false.

In the relevant provision on page 1 of the contract, Collins stipulates: “By signing this deed, I understand and agree that the location, retention, cataloging, preservation, and disposition of the Donated Materials by the Alamo will be conducted in its discretion, in accordance with General Land Office and Alamo policy and other applicable law. Common discretionary uses by the Alamo include, but are not limited to, exhibition, display, digitization for preservation and access purposes, and making works available for research and scholarship.” I have attached a copy of the entire signed agreement for your review.

In both “Come and Fake It” and Chris Tomlinson’s May 20 column in the Houston Chronicle, my agreement to build a state-of-the-art museum is repeatedly mischaracterized. Tomlinson demands, for example, that state experts must “set out which of the artifacts rock singer Phil Collins donated are legitimate before the General Land Office spends another penny on a new museum to house them.” No. They. Don’t.

Were there questions about the provenance of some of the items in the Collins collection? Of course there were! The authors present this as some “aha” moment, but I learned that some items had questionable provenance when I read Collins’ own book, “The Alamo and Beyond, A Collector’s Journey,” long before we agreed to accept his generous donation.

The authors raise issues on about a dozen artifacts. Let’s assume their doubts are well founded on the entire dozen (they are not) and then let’s add in another dozen for good measure. That makes twenty-four “tainted” gifts, and leaves us with 183 that are not. Therefore, the smart thing to do is “just say no” to the 183? Really?

In the forward of Collins’ book, historian and author Stephen L. Hardin states that the provenance of some items is subject to question and notes that “the acceptance of questions and criticisms is a legitimate part of the historians method.”

Collins himself comments on the unclear origins of items multiple times throughout the book — using phrases like “it is possibly thought to be” or “would possibly have belonged to” or “William Travis’s Sword Belt from the Alamo?” Yes, on page 173 in big bold letters above the picture of the sword belt is a question mark. Where was that acknowledgement by the “Come and Fake It” authors? Lost, no doubt, in their rush to sell a narrative, the facts be damned.

I hate to rain on the authors’ parade of startling revelations (actually I don’t), but the idea that the General Land Office and/or Commissioner Jerry Patterson were duped by Phil Collins or anyone else is just false. Collins is as much a benefactor to Texas as were the citizens of Cincinnati, Ohio when they gifted Texas with the Twin Sisters cannon that helped carry the day at San Jacinto. Texas thanks you Phil Collins!

Speaking of the Twin Sisters, the authors’ go-to archeologist, Tom Nuckols, makes yet another of the book’s demonstrably false assertions when he claims we don’t know what caliber the cannon-balls were.

“(Collins) says he has cannon-balls shot by the Twin Sisters at San Jacinto,” Nuckols writes. “Nobody knows what caliber those cannons were!” Well, yes we do.

Were the cannon-balls from San Jacinto? With only one battle there, one can conclude a cannon-ball documented to have been found at San Jacinto comes from that battle. Was it fired from the Twin Sisters? Since Texas had 2 cannons and Mexico had one, yes it probably was. If the cannon-ball was found in the Mexican position it was likely fired by the Texans and vice-versa. Add the fact that the single Mexican cannon is thought to have fired only 3 times, a reasonable person would conclude a Twin Sisters attribution is well-founded.

This error-ridden book chapter unfortunately published in Texas Monthly without fact-checking, is prelude to the Big Lie the authors tell in their rush to rewrite history in “Forget The Alamo.” Though only given a nod in the Texas Monthly article, the main premise in the book is that the Texas Revolution was really all about slavery. Once again, they ignore or give short shrift to facts that undermine their argument.

1-When writing about the causes of the Texas Revolution, it would seem obvious to review and refer to the six general and fourteen specific causes for rebellion listed in the March 2, 1836 Texas Declaration of Independence. Not one of the 20 listed causes mentioned slavery. If slavery were a cause, I guess it didn’t rank any higher than #21. The authors should address this inconvenient fact, not ignore it.

2-There were five other Mexican states (Zacatecas, Yucatan, Tabasco, Nuevo Leon, Tamaulipas) in rebellion at some time during the same period (1835 – 1846) and they were non-slave holding states. This would indicate there were other far more significant reasons for revolution — reasons that were shared across Mexico, including in Texas.

3-Santa Anna’s enactment in late 1835 of “Siete Leyes” (Seven Laws) nullified the federal constitution of 1824 that had given power to the states, disbanded state legislatures, and replaced elected governors with appointed ones. This was not well received and was considered the last straw by many. Texans, as did citizens of other Mexican states, fought for a return to the constitution of 1824. In fact, one of the Texas battle flags was a Mexican tri-color that featured “1824” in the center white panel.

4-The majority of prominent Texans who identified with the “Peace Party,” the faction in pre-war Texas that from 1832 – late 1835 opposed war and wanted to maintain Texas as its own state within Mexico, were slave owners. Prominent among this group were Stephen F. Austin, Thomas J. Chambers, David G. Burnet, and Josiah Bell. Ironically, Austin, as the book conclusively proves, was a slavery supporter, who opposed war and independence until very end. The authors would have us believe the war was overwhelmingly about slavery notwithstanding that many of those who opposed the war were themselves slave owners.

5-The vast majority of Texas combatants were not slave owners. Would they be willing to die for those of the slave owner/planter class? There were certainly opponents of slavery in the Texas ranks. In fact, one of those who fought at Gonzales and later died at the Alamo was Amos Pollard, a well educated physician who came to Texas from Massachusetts. Pollard was an ardent abolitionist who corresponded with the prominent abolitionist of the day, William Lloyd Garrison, who published Pollard’s letter in the Abolitionists pamphlet “The Liberator”.
I applaud the authors’ zeal in insisting we tell the whole story instead of the “Anglo good, Mexican bad” narrative we suffered through for a hundred plus years. I hate to break it to them, though: this is not a new idea.

In fact, the Daughters of the Republic of Texas decades ago began seriously recognizing the Tejano contribution to our history, and during my tenure at the GLO every speech I gave on the Alamo I recited the names of the seven known Tejanos who died there and added that the first “illegals” crossing a river into Texas were Anglos crossing the Sabine River, not Mexicanos coming across the Rio Grande (or Rio Bravo as it’s known in Mexico).

We should never gloss over abuses and shortcomings of those historical icons from Texas history. That is why in 2015 I, along with author Glenn Justice, Austin Lobbyist Lee Woods, and Sul Ross University archeologist David Keller, organized an archeological expedition to the site of the 1918 Porvenir massacre. At Porvenir, Texas Rangers and local ranchers murdered fifteen innocent Tejanos – arguably the darkest chapter in an otherwise honorable history of the legacy law enforcement agency in Texas. Our archeology was featured in a documentary movie that premiered on PBS and is now available on Amazon Prime. I am no stranger to telling the whole story, warts and all, of Texas history.

The purpose behind “Forget The Alamo” is to sell copies, not to add to the body of history. Nothing wrong with that in the least. In the woke world we find ourselves in, their timing is impeccable.

Their facts, however, are not impeccable and I hope and trust Texas Monthly will set the record straight about the Collins collection and include “the rest of the story” as it relates to the Texas Revolution — the good and the bad. Texas Monthly might even consider thanking Phil Collins.

__________
Disclosure: The writer of this article worked in a media relations role for the Texas General Land Office during the time in which Collins’s collection was delivered to the Alamo.