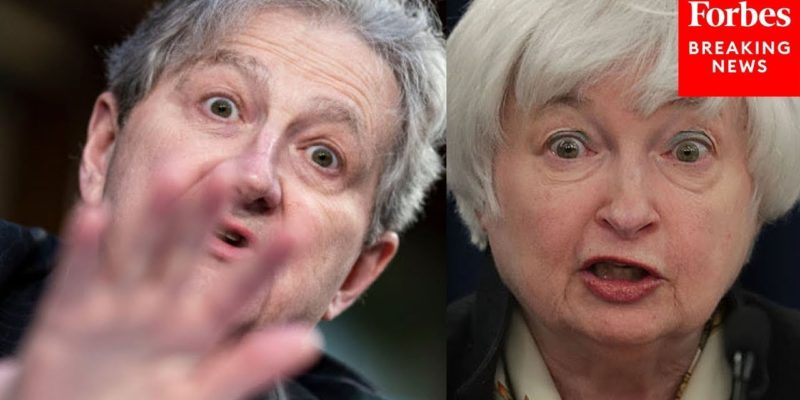 This is a few days old. It came from a hearing on Thursday, and it was in a Senate committee hearing when Treasury Secretary Janet Yellen came in to discuss the economy.

And Sen. John Kennedy got hold of her to talk about inflation, and he didn’t let go.

The thing about Kennedy is he has a quite advanced bullshit detector, and Kennedy also has a fairly decent understanding of economics. And when Kennedy sees that the annualized inflation rate in May was five percent, and then he sees the Federal Reserve moving to raise interest rates, Kennedy concludes that we’ve got a problem.

Inflation is an economy-killer. Every socialist workers’ paradise which ever existed and tried to tax and spend its way to prosperity ended up debasing its currency to the point where it was worthless, and along the way it destroyed people on fixed incomes, the poor, hourly wage-earners and people without tangible assets. Look at Argentina, look at Venezuela, look at Greece.

Kennedy knows this, so when Yellen comes to testify he’s determined to get some answers. After all, they’re letting Bernie Sanders write a $6 trillion federal budget which will contain the most irresponsible spending in the history of America, and inflation is at five percent in May before that tsunami of federal spending engulfs the economy.

So he asks Yellen if she thinks the inflation rate will go up or down. She says down, which is worth remembering. Kennedy doesn’t leave it at that, though as to substantive answers from Yellen he’s out of luck.

Why is this interesting? Because the party line from the Biden administration and the DNC is that the inflation we’ve already seen is just some minor glitch in the economy, that it’s working itself out, that nobody has anything to worry about and that Republicans are seizing on it for purely political reasons.

Of course, when construction workers across America lose their jobs because developers shut down projects due to the high cost of building materials, it’s no longer just politics at work. Real people are being hurt by a spike in inflation.

The Wall Street Journal did a fairly educational video last week explaining the current inflation in the context of history and particularly in the 1960’s and 1970’s. It concludes with a rather sunny outlook for the economy and chalks up the May spike to the same thing Yellen and the Biden administration are saying, namely that this is all a product of reopening the economy from COVID.

But nobody seems willing to make the connection between the runaway federal spending of the 1960’s, when Lyndon Johnson launched the Great Society at the same time he ramped up the Vietnam War, which touched off a 15-year debasement of the dollar that didn’t end until Paul Volcker came on as Fed chairman, jacked up interest rates, threw the economy into a recession and broke the fever in the early 1980’s, and the runaway spending spree we’re in now.

This isn’t an attack on the Biden administration. Not really. Runaway federal spending and insurmountable federal debt has been an issue nobody has wanted to deal with for a long time, and Donald Trump’s record of fiscal restraint was absolutely nil. He was hoping to grow his way out of that problem, but COVID and losing re-election last year got in the way.

And so we’re completely off the rails on spending, which was a condition pre-existing the Biden administration.

Except Biden’s handlers want to make it a zillion times worse.

And what you’re going to get for it is inflation. Not a little spike of it. A prolonged runup in prices. It’s inevitable that you’d have that.

Kennedy recognizes it. The guess is so does Yellen, but that isn’t the party line, and she knows she’s not allowed to depart from the party line. So we just lie about inflation and hope it goes away.