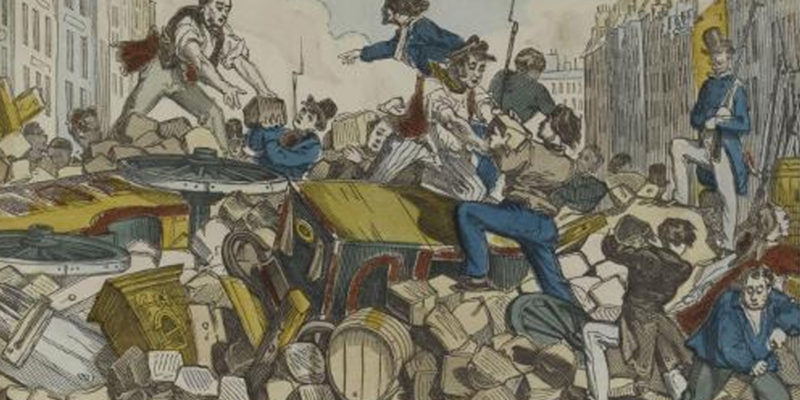 The word ‘freedom’ has a powerful hold on the hearts of folks in the States.  Invoking it has caused very intense and sometimes contradictory reactions over the years.  Sen Conrad Appel gives us a contemporary example of this when he writes,

In 1789 the French people rose up against a millennium of tyrannical rule and demanded their freedom. It took them almost 100 years after that to completely unburden themselves from autocratic rule in its many forms, but today they stand proudly in the Pantheon of free peoples.

In French history there was an expression that was used to arouse an abused people against the tyranny arrayed against them. It was a call to the people to defend their freedom with their own lives. “Aux barricades” – to the barricades. Repeatedly the French people literally stood behind rough barricades to bar the way against crushing oppression. And time and again they prevailed. Modern France is a testament to the power that resides within the breast of the free French people.

In his effusive praise of liberty and her defenders, he overlooks just who these supposed French freedom fighters were who were manning the barricades:  They are the same kind of atheistic socialists/communists that he later attacks in his article for causing so much trouble here in the States (Engels confirms this.).  In Sen Appel’s own words:

America today is the one nation that people are willing to risk all to literally break into. Yet American citizens are assailed by far-Left radicals whose message of hate is amplified by a corrupt media. Theirs is a constant reciting of a “Big Lie,” a barrage of hate-filled innuendo of systemic racism. America is the country who twice elected a black man as President and today has a black woman as Vice President. And yet the people are assaulted with vicious attacks by the radicals and the media as being irredeemably racist and therefore evil.

But if Sen Appel is going to praise the French Marxists for overturning the ancien regime of France, he can no longer criticize the Marxist social justice warriors who are carrying on the same kind of violent, nihilistic nonsense here in Louisiana and elsewhere.

By his own logic he would likewise have to approve of the bloodletting in Russia, Eastern Europe, China, and other southeast Asian countries by Marxist agitators who carried out the same program in those places as in France.

In all these places it is the same method being used:  A little clique of radicals with the help of a lying media tries to smear and discredit the established authorities in order to concentrate power in their own hands.  They manipulate the lower classes, exaggerating the evils of the present rulers, and promising them extravagant gifts if they would join their revolution:  more rights, freedoms, money, etc.

But what kind of freedom is this that is being offered?  The crucial point to remember is that freedom, rights, life, property, and so on do not exist for themselves; they are not ends in and of themselves.  For men and women, they are means to an end, the same end that all created things were brought into being to participate in:  Union with the God who created them from nothing.

Why did God give the Israelites the land of the Canaanites?  So they could wallow in an abstract freedom?  No.  But rather, ‘That they might observe his statutes, and keep his laws’ (Psalm 105:45).

This week containing the Feast Day of the Holy Apostles Peter and Paul, it is also fitting to remember their words to Christian folk on this subject:

For you, brethren, have been called to liberty; only do not use liberty as an opportunity for the flesh, but through love serve one another.

Therefore submit yourselves to every ordinance of man for the Lord’s sake, whether to the king as supreme, or to governors, as to those who are sent by him for the punishment of evildoers and for the praise of those who do good. For this is the will of God, that by doing good you may put to silence the ignorance of foolish men—as free, yet not using liberty as a cloak for vice, but as bondservants of God. Honor all people. Love the brotherhood. Fear God. Honor the king.

‘Honor the king’ – St Peter ends on an interesting note.  Sen Appel has given us his opinion of the kings of France:  They were ‘tyrranical’.  But what about actual non-Marxist, conservative Frenchmen?  Do they agree with Sen Appel that their monarchy was oppression and nothing more?  Read Chateaubriand, Frederic Le Play, and other French counter-revolutionaries, and one finds a different answer.  Charles Maurras, one of their later number, gives a good summary of their views:

Let us bear fully in mind a consciousness of the disaster.  Popular government has been seen and recognised to be the direct and common cause of our [France’s—W.G.] dissolution.  And not only parliamentary democracy but equally plebiscitary democracy.  It is not a question of incriminating a vague electoral demagogy due to the perverse morality of men who wrongly interpreted a reform excellent in itself; it is a question of knowing that everything that leads to government of all by all, everything that claims to resemble it or encourages it, destroys the government and kills nations.

. . . But without needing to say anything, one sees … that the wish for ‘Long live France’ is only the seed of another wish:  ‘Long live the king.’  In the mathematical illumination of the soul, everything that has the taste for the life of France can no longer avoid perceiving . . . that to feel national is to feel royalist; France does not have to become a kingdom once again; in large outlines of its necessity, of its directions, it has always been one.  But it has forgotten it! …. Memory!  Memory! (‘For a French Awakening’, The Future of the Intelligentsia & For a French Awakening, Alexander Jacob, trans., London, Arktos, 2016, pgs. 94-5, 109.)

We appreciate Sen Appel for his dedication to the well-being of Louisiana and her sister States, but he is mistaken in his views of French history and of freedom.  It is up to the reader to make up his own mind regarding monarchy vs republics and so on, but there can be no debating that it is a grave error to equate the French Marxists who manned the barricades and the guillotines with the friends of ordered liberty.  Throwing the word ‘freedom’ over a political movement does not mystically transform it into something virtuous, as we see very clearly with our own Marxist-CRT-BLM-LGBT cadres.  Nevertheless, if our political goals (freedom, property, and the like) do not point us toward God, we will end up repeating the disastrous history of France, whose atheistic liberty has left her in perpetual turmoil since 1789.

The falsification of history – whether intentional (1619 Project, systemic racism, etc.) or unintentional (Sen Appel’s naïve reading of the French Revolution) – must be avoided at all costs.  For ‘the rebellious dwell in a dry land’ (Psalm 68:6).