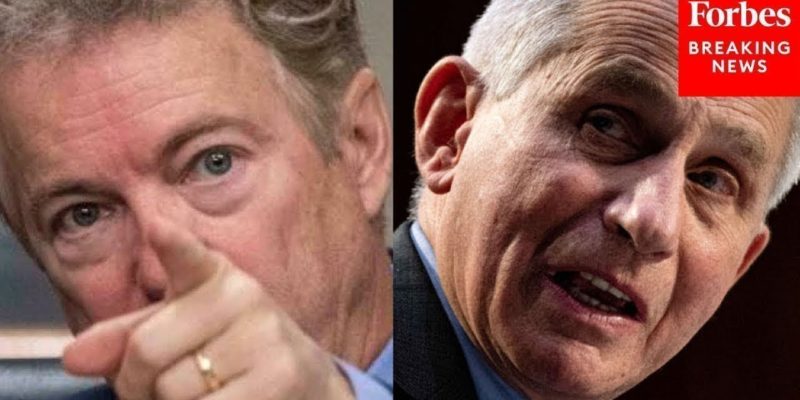 It wasn’t exactly the trial scene between Tom Cruise and Jack Nicholson in A Few Good Men, but it was pretty dramatic stuff.

That was a highly questionable contention. Technically you could perhaps make it seeing as though the funding of the Wuhan lab came from Dr. Peter Daszak, who was the head of something called the EcoHealth Alliance, as a “sub-grant” from NIAID, but Fauci knew what Daszak was doing and so did everybody else. To say that EcoHealth funded the research and not NIAID is a lie and a dodge.

Initially, it appeared that was what Fauci was trying to do. But he changed his tune when people caught on, and his contention is now that what was funded wasn’t gain-of-function research.

And that’s what Paul hit him on this week.

So Fauci’s new contention, following Paul nailing him to the wall on (1) the NIH’s own definition of gain-of-function research, (2) the Wuhan lab publishing papers citing NIH funding of its gain-of-function research and (3) the use of bat coronaviruses which were not transmissible to humans which are now transmissible thanks to the Wuhan lab’s manipulations, is that those facts are irrelevant because Paul hasn’t shown evidence that NIAID funded the creation of COVID-19.

Fauci then accused Paul of lying about that, as Paul said that isn’t his accusation.

There was a good discussion of this at Sky News Australia yesterday, as host Rowan Dean did a nice job identifying the straw man Fauci is using.

Dean has it right.

The point is that the federal government declared a moratorium on gain-of-function research, and for obvious reasons – there is at best very suspect justification for playing Dr. Frankenstein with viruses incapable of affecting humans. Yes, in doing so you might be able to concoct vaccines for viruses in nature which might mutate and become a pandemic. But the chance of doing that through gain-of-function research as opposed to other kinds of scientific experimentation is fairly miniscule.

And on the other hand, the danger of gain-of-function research is two-fold. The prospect of a lab leak, which is what has clearly happened in the case of COVID-19, is ever-present – and particularly in a place like China, where sloppiness is the rule rather than the exception – alone makes gain-of-function a terrible idea.

But the other obvious danger is that what gain-of-function is best used for is the creation and development of biological weapons.

And giving funding to a lab which is known to be in the biowarfare game in a country which is a hostile and aggressive rival to America to do gain-of-function research on viruses potentially capable of causing a pandemic is a level of negligence, or worse, which is off the charts.

It’s pretty tough to make the case Fauci hasn’t done that. Clearly that’s what he did, and he did it after short-circuiting the federal ban on gain-of-function research. His defense to this is to deny that he specifically funded the creation of COVID-19, to which our response is “who cares?”

He funded exactly the same kind of research which fairly obviously produced COVID-19. COVID-19 was very likely the eventual product of gain-of-function experiments Fauci did fund; it’s not like when the EcoHealth grant ran out the Wuhan lab turned out the lights and stopped working on bat coronaviruses; they just had more advanced knowledge to work with.

Of course, if it turns out that COVID-19 was in fact a bioweapon, whether deliberately or accidentally released, that only heightens Fauci’s culpability.

He isn’t winning this fight with Paul. He’s losing. And it’s only a matter of time before whistleblowers at NIH or NIAID finally start to confirm what we all suspect.

He’s been outed. Dr Fauci has no credibility. He’s imploded. And he has made the situation worse. pic.twitter.com/nrE9pldEfm