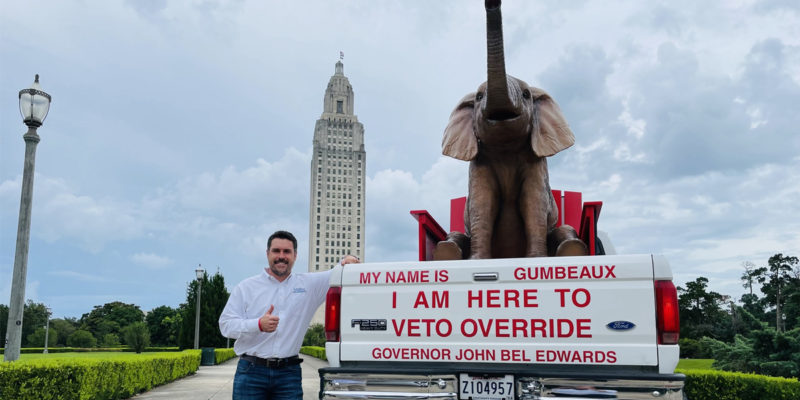 …or perhaps the better way to say it is it’s time to manage the expectations coming out of this thing. Veto overrides in Louisiana just don’t happen, so even one is a big deal.

Yesterday, despite some intermittent rain there were still at least two hundred people who came out to a rally on the steps of the state capitol to celebrate the calling of the veto session, courtesy of majorities in both houses refusing to turn in ballots that would have canceled it, and to exhort legislators to follow through on veto overrides. Lots of big talk was heard.

Of course, there’s big talk on the other side, too. Rep. Ted James, who heads the Legislative Black Caucus, ended up deleting this tweet but he didn’t delete the attitude which sparked it…

Most friends don’t “cation” each other. But if your friend is Ted James you might well be used to it.

There are 28 potential overrides out there, but if you’re expecting numbers that high you’re going to be disappointed and Ted James might “cation” you with an egg or two.

And while from a conservative standpoint this session is inevitably going to fall short of our desired result, we shouldn’t lose sight of the historical significance of what will happen today.

And it’s almost certainly going to happen this week.

Louisiana Republican House Speaker Clay Schexnayder said Monday he is “100%” sure there are enough votes to overturn Democratic Gov. John Bel Edwards’ veto of a transgender sports ban bill on the eve of the start of a historic veto override session.

Senate Bill 156 by Sen. Beth Mizell, R-Franklinton, to ban transgender athletes from competing on girls sports teams is one of the two top targets of Republicans during the five-day veto override session that begins at noon Tuesday in the State Capitol.

The other is Senate Bill 118 by Sen. Jay Morris, R-Monroe, to allow anyone 21 and older to carry a concealed firearm without a permit or training.

“Of the two biggest ones in the room — I feel comfortable 100% on the Fairness in Women’s Sports Act,” Schexnayder said at the Press Club of Baton Rouge.

Now – it’s possible that while the House has the votes to overturn the veto on SB 156, which is the girls’ sports bill, Edwards might be able to sustain his veto in the Senate. If he’s able to do that, the House won’t even get a chance to vote.

As we already know, all House bills will begin in the House and the same goes for the Senate. From there, things get a bit more complicated.

To get the veto override process started, Senate President Page Cortez says an initial motion to reconsider must be made from the floor, which will require a majority vote. A second motion will then be required to move the bill to final passage (subsequent to a governor’s veto), which will require a two-thirds vote. This second motion is debatable and members will be allowed to take to the floor. “For this step, it’s essentially the same procedure as final passage,” Cortez says.

In that Baton Rouge Business Report piece cited just above, Jeremy Alford notes that some are trying to argue you can’t use a veto session to override vetoes which were made in a timely enough fashion that they could have been overridden during the legislative session itself. This applies to Rep. Blake Miguez’ Zuckerbucks bill, which passed relatively early in the regular session and was promptly vetoed.

It’s going to fall to Schexnayder to make the judgment on that one. And it’s definitely something to watch, because Schexnayder has coddled the hell out of the Democrats on things like this practically the whole time he’s been Speaker. But if he does that to the head of the House Republican Delegation on a core Republican issue of election integrity, it’s the kind of move which will create a coup against him. We haven’t heard much debate over the question of whether a motion to vacate the chair is in order in a veto session, but our reading of the rules is that such a motion is always in order during a floor session.

And if that’s correct, a betrayal of Miguez on the question of left-wing billionaires dumping cash on local elections officials in Orleans, East Baton Rouge, Caddo and other heavily-Democrat parishes in an effort to turn them into Fulton/Maricopa-style ballot-box-stuffing centers is quite likely to produce such a motion.

What’s more likely would be that the vote would be called on Miguez’ bill and then he’ll get no help from the Speaker in attempting to get to the 70 votes for an override. Miguez managed 69 votes for the Zuckerbucks bill in the House the first time around, plus 26 in the Senate with one of the supporters, Heather Cloud, missing the vote. That would put him one short, but Rep. Laurie Schlegel hadn’t been sworn in when the bill initially passed and she’ll vote for it.

With Sen. Ronnie Johns still saying (fraudulently, by the way) that his recently-operated-on knee prevents him from attending the session, that would mean Miguez would have enough votes to pass the override but without a single vote in either house to spare.

You’d want the Speaker of the House whipping votes on an override like that, if for no other reason than to counter the whipping of votes that Edwards will do on the other side. But Schexnayder said yesterday that’s too much to ask from him…

Schexnayder was not personally trying to drum up override votes for any of the measures in the session that starts Tuesday and can last until Saturday. Overturning a veto takes a two-thirds vote of the House and Senate.

“As far as me going out and actually whipping up votes, I haven’t done that in the past, and that’s not how I work and operate,” the Gonzales Republican said in a brief appearance before the Press Club of Baton Rouge. “I will have my meetings with each delegation and caucus and sit down and figure out our strongest path forward.”

There are a number of bills among the 28 which are eligible to come up for an override which had easily enough votes the first time through to become law this week if things go according to the chalk. But the Democrats who joined the GOP in voting for passage probably can’t be counted on to help with, say, Sen. Robert Mills’ bill preventing ballot harvesting.

Schexnayder’s confidence about the girls’ sports bill is likely founded. Any Republican who flips his or her vote on that bill is dead politically for any future election and is very likely to see a recall effort launched against him or her by next week with a real chance of having it hit paydirt.

There were only six “no” votes on the girls’ sports bill when it passed the Senate. Four Senators weren’t there for it. One was Johns, and the other was Mike Fesi, who’s without a doubt a supporter. So the bill starts with 30 supporters and Edwards would have to pick off five of those.

We don’t think he can do it.

Also worth watching is Democrat state senator Gary Smith, who was a “yes” vote for SB 156 the first time. Smith’s name has been thrown around a good bit as a potential gubernatorial candidate – something of a John Bel Edwards 2.0 who bills himself as a “conservative” Democrat. He has a bit stronger case to make for that than Edwards ever did, but if Smith were to flip his vote on that bill, the chance that he could get elected to anything ever again probably melts away.

Smith also plays large with respect to Sen. Jay Morris’ SB 118, the Constitutional Carry bill. We’re very concerned SB 118 won’t survive in the Senate because of a vote flip from Republican Patrick Connick. If Connick turns his coat on constitutional carry, along with Johns’ malingering you’re now down to 25 Republican supporters. That isn’t enough, though Smith might save the bill if he sticks with his “yes” vote the first time through.

So there’s a bit of drama here and there’s a political narrative available which might well signify the “long game.”

Which is that Edwards is busy trying to pick off Connick and one or two other weak Republicans to create a one-vote shortage for overrides in the Senate, and then Smith rides to the rescue of the conservative cause on SB 118 and SB 156. Maybe even one or two others.

Now he’s made his bones as a “conservative” Democrat and he runs for governor as a receptacle for that Jay Dardenne Republican vote which Edwards carried twice to victory. Louisiana Democrats pull this kind of stuff all the time, so don’t be surprised if they try it again.

All of those machinations aside, here’s the bottom line: there has never been a veto session in Louisiana before, and thus a veto session has never produced a veto override before. It’s highly likely the veto session will produce an override on the girls’ sports bill. Beyond that, we really don’t know.

But even if that’s the only bill which gets an override, the Louisiana Legislature will have made history in taking an ax to the imperial governorship of Louisiana. Whether that tree is actually felled or not, the act itself is significant.

If for no other reason, it’s like one observer said last week – if you’re at a bar drinking beer and you hit the restroom that first time, “breaking the seal,” as it were, what follows is a flood where you’re using that restroom again and again. And that’s what this is likely to be. The precedent itself is a big deal, and our appetite for future overrides won’t be so easily sated.

Today begins a new era. How auspicious a beginning it’ll be, we can’t say.