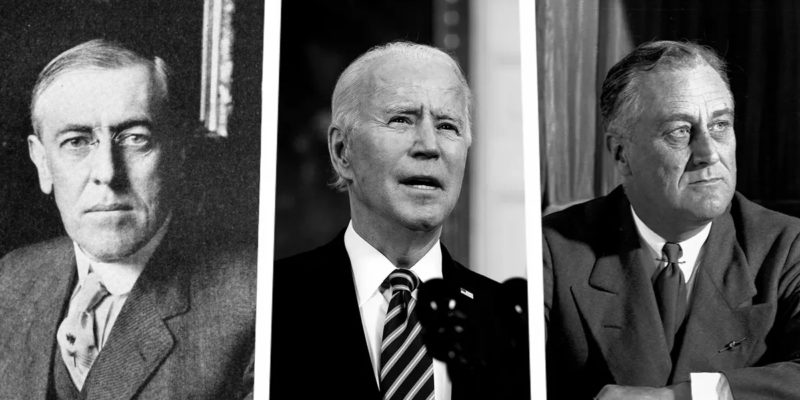 Ever wonder why President Biden willingly sacrifices America’s standing in the world?

It really is no wonder, it’s all right there in our history books. But I suppose in order to understand it we must first want to understand it. You see, a progressive like Biden has a naïve, overriding belief that all will be well as long as we act as if some undefined goodness in people is their motivation. This even when those people are demonstrating a desire to destroy our own way of life. To progressives, as long as we play nice, we should expect that everyone else will too.

Examples of such folly abound. The currently popular concept of unfairness and the resulting refusal of progressives to accept that criminals operate of their own free will, that no one makes them live beyond our principles of law. The misbegotten faith that white people adhere to a deviant belief in racial supremacy and that is the only reason that many people of color don’t achieve in our society. The belief that government-forced inclusion and diversity, and not hard work, family values, and education, are the only way that certain identity groups can succeed.

In the case of international affairs progressives apply these same metrics to people and countries of vastly different philosophies from our own. They just can’t understand why our values don’t apply beyond our borders. They can’t fathom how economics and power elsewhere play roles that don’t fit the American psyche. And they have no room in their thinking for ancient hatreds among and between peoples.

So, lets refer to a little history. Almost exactly 100 years ago, just after the Great War, progressive Woodrow Wilson championed the naïve concept of a League of Nations. This in the era of the subjugation of Germany by the victorious powers and the sudden and murderous rise of communism.

Even though Americans rejected the concept of subjugating American power and influence on a common body dominated by Europeans, the League went forth. That is until the rise of supranationalism in Japan, Italy, and Germany. Then, almost overnight, the League was destroyed by the great nationalistic wars of the 1930s and 40s.

Wilson’s progressive concept was that people would simply surrender their national interests to others, in today’s words he held a One World view. But such was built on shifting sands and simply vanished under the heels of militarism that millions of dead.

In 1945 Franklin Roosevelt, skipping along down the same progressive Yellow Brick Road that Wilson tread, sold out the western allies to Stalin’s Soviet Empire in exchange for the creation of the United Nations. That body, a toothless tiger, has been nurtured and funded by the US since, fostering great opportunity for America’s enemies to have a place of seeming credibility to attack us.

And what did Roosevelt get for his undercutting of our national power? He got 60 years of communist oppression of Central and Eastern Europe and Central Asia. The Cold War to great extent was a conflict featuring the West endeavoring to end Soviet subjugation of millions of people, a direct outcome of Roosevelt naivete’ in not resisting Stalin. Progressive trust in the fundamental goodness of evil people has cost millions of lives and unmeasured treasure.

So, now we a have another progressive leader, and in his naivete he too has ignored history. He has opened the borders and allowed hordes of people in, people with beliefs and backgrounds vastly different from those that have underpinned America for three hundred years. He has deserted our allies in Afghanistan and is now expressing trust in the good will of Taliban leaders even as allied countries wonder what is in store for them. He has gutted our military by trying to repurpose it to be a training ground for social change. He has acted on advice of those who seek to undermine American prosperity in the name of progressive, even socialist, ideals.

Wilson, Roosevelt, Biden – three leaders who allowed unrealistic beliefs to get in the way of seeing reality. And in doing so have caused great harm to the American people. Three leaders have held or will hold us back for generations as we suffer under the burden of policies that fly in the face of certainty that world events are driven by economics and power, not goodwill and useless gestures.

Am I being too cold in my logic? Well, to many I am sure that I am, but those are the ones who have no realistic view of human nature and lack an understanding of human events through time.

Should we strive for a better world? Of course, but we must do so from a position of economic and military strength, not by a naïve trust in the goodwill of others. Only on rare occasion does such goodwill exist. To ignore that contributes to the tribulations of our people.

Interested in more national news? We've got you covered! See More National News
Previous Article PERRICONE: You Shouldn’t Trust The Media Ever Again
Next Article BLANCO: The Welcome Back, Carter Show Is No Good