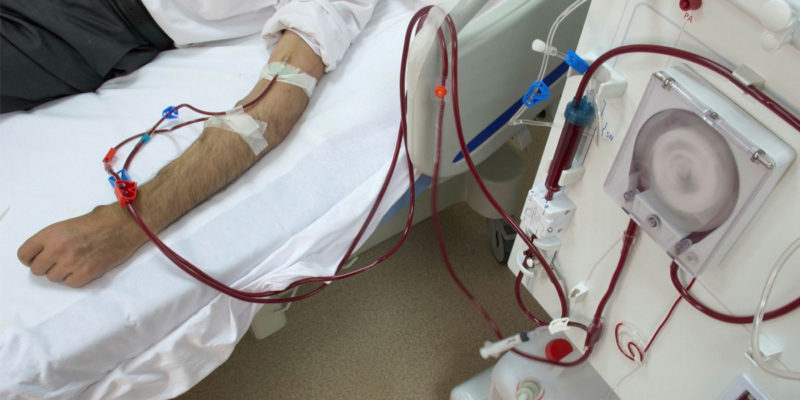 Editor’s Note: A guest post by Sherry Robinson, a cancer survivor and advocate from Houston, TX.

In 2004 my dad had his first dialysis treatment after flatlining from a heart procedure. We were not sure he would make it through the night as his organs were shutting down, but we were told that dialysis would help and at the time, we wanted to just do whatever was needed to save him. When my dad left the hospital, we were told that his kidneys would require dialysis in the future and his doctors would monitor him.

Fast-forward to 2007, and we were informed that my dad would require dialysis three days a week for four hours at a time. Our first day we headed to the clinic, we thought we would be able to sit with him – much like cancer patients can do to receive support during the treatment – but to our surprise that was not the case, nor were we informed of the challenges yet to come. My dad worked full-time and took his treatments on Tuesday, Thursday, and Saturday so as to not interfere with work.

I took my dad to dialysis every Saturday until 2012. We spent time discussing the pain of being injected by the needle, unable to have us with him to provide support through his treatment, as well as the lack of healthcare coverage, the continued decline in having the needed coverage, and what would happen in the years to come.

His story is the same as countless dialysis patients across the country: full coverage is remarkably difficult to get. In many cases, patients only have Medicare, which doesn’t always meet the full cost of dialysis treatments, forcing immense out-of-pocket costs on patients. Over time, those costs add up and can feel like they’re burying patients and their families.

It’s well past time for change, which is why I’m encouraged to see Congress making progress on the Jack Reynolds Memorial Medigap Expansion Act. It’s a much-needed bipartisan bill that would expand Medigap coverage to patients under 65 who have End-Stage Renal Disease (ESRD), meaning a lot of people who don’t have the full costs of their treatments or medications covered by Medicare would now have access to plans that help meet those costs.

Now, I’m hoping that Texas lawmakers can play a leading role in making sure this bill becomes law. With support from Representatives Dan Crenshaw, Sheila Jackson Lee, Sylvia Garcia, Al Green, and all of Texas’ other voices on Capitol Hill, I’m confident that Congress can get this done.

Without Medigap coverage, patients can be stuck paying for 20 percent of each dialysis treatment. Since patients need to go through dialysis at least three or four times every week, it’s not hard to see why cost is such a huge barrier for patients all over the country who only have Medicare to help pay for treatments. The Jack Reynolds Memorial Medigap Expansion Act would help to make sure that coverage is available to them at an affordable cost, and I know people who are in the same situation as my dad was will appreciate the change.

It would be a welcome change, too, because I’ve noticed that not only do dialysis patients find it hard to get the coverage they need, but there also needs to be a broader public dialogue about what dialysis is and just how hard it can be on patients. Not many people really understand what it means to have ESRD, and too often their struggles go overlooked.

I became a member of Dialysis Patients Citizens to help speak for my dad and the many others that don’t have the energy to fight. My journey began the first day my dad had dialysis and I will continue to help other patients in his memory.

We need to do more collectively to understand what dialysis patients go through and how we can help. Passing the Jack Reynold Memorial Medigap Expansion Act is the perfect place to start, and I hope lawmakers come together to pass this bill and make sure patients can focus on their health, not the bill they get for their treatment.