Yesterday’s Louisiana Board of Elementary and Secondary Education meeting was an absolute disgrace, and it pointed out in technicolor what an abject dearth of leadership exists in Louisiana’s political class.

BESE was supposed to meet to discuss the question of mask mandates in Louisiana’s schools, as thanks to the tender mercies of the state’s dictatorial Democrat governor John Bel Edwards and his statewide indoor mask mandate we’re now facing the prospect that kids as young as kindergarten are sentenced to wear masks all day long in Louisiana’s schools, for as long as Edwards deems this institutional child abuse should last.

The majority of BESE’s members disagree with the mask mandates. They’ve demonstrated that by refusing to impose them in the past. But when the issue came up in yesterday’s meeting eight of them voted to adjourn rather than to take up the issue.

Our thanks go to Michael Melerine and Jim Garvey, the two BESE members showing enough fortitude to at least have the debate. They voted against adjournment. As to the rest, they’re absolutely worthless cowards who should never be elected to anything ever again.

The audience at the meeting was raucous and rude. Voices were raised. And many in the crowd protested by refusing to wear masks. But BESE president Sandy Holloway’s conduct of the meeting inflamed the situation. She started the meeting a half-hour late, she meandered through a bunch of minor items, she then dragged the board into executive session to discuss state school superintendent Cade Brumley’s performance evaluation, then BESE broke for lunch. By that point the audience of parents and concerned citizens – ordinary Louisianans who had come from as far away as Shreveport and Monroe and Lake Charles – were furious.

Faced with that kind of cowardice and contempt, yeah – people are going to express anger. Rightly so.

So who does? Where do our citizens go to get relief from oppressive, unscientific, damaging government policies? Putting masks on schoolkids is pointless and stupid. It doesn’t stop the spread of COVID. Presumably it might be to protect teachers, but why aren’t they vaccinated? And we already know there are costs associated with those masks – robbing kids of oxygen while their brains are still developing, robbing them of the ability to see facial expressions at a time when learning to read them is crucial to their emotional development, and so forth.

Again, where is the relief from this asinine policy?

It’s going to have to come from the Louisiana Senate. Which is a bad thing.

I say the Senate, because the House of Representatives has already tried to pull Edwards off the people of Louisiana. Last year, after months of dithering, the majority of the House finally signed a petition as provided for in state law which would have stripped Edwards of his emergency powers and brought Louisiana back to normal. Edwards’ response was to – illegally – ignore the petition, claiming that unless the majority of the Senate also produced it, it didn’t have the force of law.

Judge Billy Morvant, who literally could not have bungled the court case which ensued any worse, ruled the statute providing for the use of a petition to terminate a state emergency unconstitutional. That was his way of playing Pontius Pilate and getting the case off his docket. The state Supreme Court overruled him, and Morvant has slow-played the case ever since. Such is the quality of his character as a public official.

All along, the Senate was in a position to deliver a coup de grace against Edwards by rolling in with 20 signatures on a petition to reopen Louisiana. Had they done so it wouldn’t – shouldn’t, according to state law – have mattered, as it only takes one house of the legislature to void an emergency declaration, but Edwards’ argument would have been defunct.

And if the Senate had joined the House the legislature would have been in a position, as the representatives of the people of Louisiana, to dictate limits to how draconian the measures available to Edwards would have been. Certainly he wouldn’t have been able to slap masks onto five-year-olds. The question was never whether Edwards lacked the power to act against COVID-19; that was an insulting straw man argument. He simply would have had to sit down with Louisiana’s legislative leadership and hammer out a deal they could live with.

Like with a petition which strips him of his emergency powers, and a firm statement that if he wants them back he has to bargain for them.

Well, now we’re in a position where John Bel Edwards is going to needlessly damage small children for, perhaps, an entire school year. He’ll needlessly inconvenience the adults in the state to boot. And yes, he’ll argue that the large number of hospitalizations from the Delta variant of COVID justifies his actions, but what he won’t tell you is that the Delta surge is already over. Louisiana’s COVID rate of transmission now sits at 0.68, the lowest number since the beginning of the pandemic in the state. 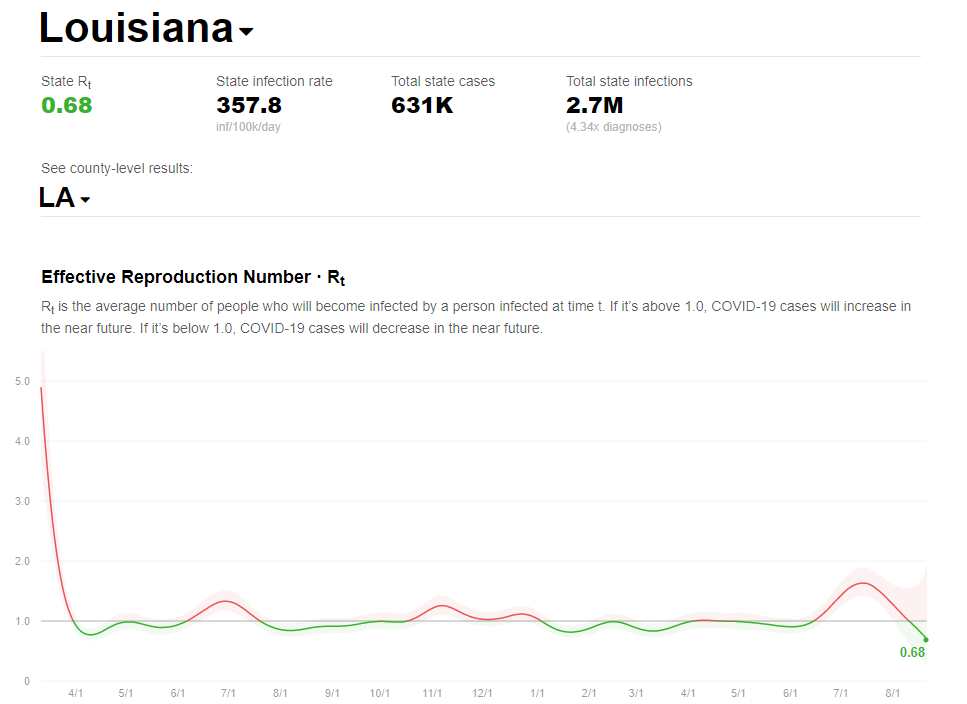 What this means is you can expect a rapid drawdown in case counts and hospitalizations over the next several days and weeks, and with it any justification for Edwards’ mask mandates or LaToya Cantrell’s ridiculous and unconstitutional vaccine passport scheme.

The House could circulate another petition, but the members who fought that fight last year are refusing to do it now. They’re irritated that the Louisiana Senate never lifted a finger to help a year ago, and they’re taking the position that it’s the Senate’s turn to show some leadership.

Attorney General Jeff Landry, who essentially has fought Edwards to a standstill on the petition issue in that case in Morvant’s court, is taking a similar position.

The Senate has so far shown itself to be just as worthless as BESE. There are conservatives in that body, but they won’t even try to circulate a petition to check Edwards’ power.

Beth Mizell, who many think is likely the next Senate president, stood up and scolded attendees at a Louisiana Federation of Republican Women meeting several days ago when the issue came up, taking the position that of all the things people should be angry about masks are low on the priority list. Others, like Sharon Hewitt, who heads the Senate’s Republican delegation, have been silent on the question. And the Senate’s president Page Cortez has a pristine record of failure on this issue. We know definitively that he refuses to lead.

Silence isn’t leadership. Silence, in this case, is cowardice and sloth. And it isn’t acceptable to say that you’re “working behind the scenes.”

Nobody trusts “working behind the scenes.” We have a long political history in this state, and that history shows pretty clearly that those who work behind the scenes very seldom work for the benefit of the people of Louisiana.

It’s time for the Senate to stand up and be counted. It’s time for someone to publicly state they’re circulating a petition among the Senators, and that they will publicly announce the identities of those who sign it as they do. And then the members of that body can get feedback from their constituents and sign or not sign accordingly.

Once the Senate gets 20 signees, the House will join in. There are easily 53 House members who’ll sign; they’ve already demonstrated that. And then Edwards will have no choice but to bargain with the legislature for an emergency declaration which preserves civil rights and sound public policy.

It’s fairly clear that most of the members of the Senate ran for office so they could attend parties and get greased by lobbyists and special interests. That’s all well and good, but the people of the state actually need them to step forward now. It’s time they showed some leadership.

But if that’s too hard, then we’ll know they aren’t up to the job and we can clean them out with extreme prejudice in 2023. Cowardly hack politicians are something we have a strong surplus of in this state; we can certainly afford to lose a couple dozen of them from the Senate.