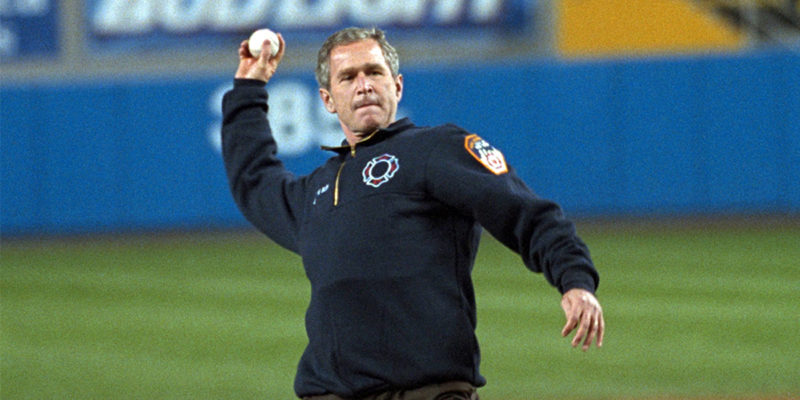 After Americans processed the shock of the September 11th terrorist attacks by militant Islamist extremists, the people of this country came together and unified like no other time I had ever witnessed in my life. Call it the Spirit of 9/12, but it was a welcome sliver of beauty amid the pall from the burning buildings.

Old Glory was in such demand there were news reports of price gouging for flags. In fact the Stars and Stripes were literally being stolen off people’s homes- including one infamous instance when a woman had displayed the flag that had draped the coffin of her father only to discover this precious heirloom missing a day later.

Partisan politics had been shelved, albeit temporarily, and even the leftist cast and writers of Saturday Night Live took a break from belittling George W. Bush’s intelligence.

Americans of all races, faiths, and parties wanted the 9/11 perpetrators and their accessories to be held accountable, swiftly and severely.

Eventually some on the left side of the aisle realized that national unity was bad for “business” and began to feverishly work to tear our solidarity apart.

Huckster film propagandist Michael Moore was practically rooting for the Taliban and the far Left began to assert their claim in the Democratic Party.

After Bush’s reelection in 2004 the Democrats went full jihad.

Hurricane Katrina would provide their opportunity wherein absurd accusations were leveled that the misery and suffering engulfing New Orleans during this unprecedented natural disaster was not the result of gross mismanagement and incompetence on the state and local levels but because President Bush didn’t care about black people.

This false narrative was widely perpetuated despite the fact that predominantly white neighborhoods were also catastrophically inundated (including my home community of St Bernard, or as it felt at the time “St Ignored”) and that President Bush fully followed through on his Jackson Square pledge to rebuild New Orleans and invest billions into critical resiliency projects. That the same residential areas completely flooded by Katrina were not under water from Hurricane Ida is a confirmation of Bush having honored his solemn vow to the people of south Louisiana as the levees his administration rebuilt and strengthened held up magnificently in Ida.

Over the next 15 years American society has been swamped under a deluge of farcical indictments as isolated local incidents have been amplified on the national scale though the most cursory review of basic violence statistics completely debase the prevailing narrative that America is systemically unjust.

With unabashed left-wing political activists pushing cooked curriculums through schools and university professors reframing American history in a decidedly negative light, the education system has churned out two generations of young people who have been indoctrinated to hold America in contempt, blindly embrace economic and political systems that have led to exponentially more death and human suffering than capitalism on its most plutocratic gilded age day, and, with the advent of Critical Race Theory, promoted a political version of original sin based upon ethnicity and that if you are of European lineage your existence is a blight if not a crime. That this ideological cancer is metastisized by predominantly white progressives seems to be the obvious hustle tell that their naive charges are blind to.

Unity after September 11th proved problematic for Democrats; national self-loathing for the false construct that America is some sort of wicked nation led by war criminals and illegitimately established by irredeemable men (aka Our Founding Fathers) facilitated the Democrats’ victory in 2020.

So if you wonder why that feeling of unbridled patriotism that was so strong and prevalent across America 20 years suddenly vanished, it’s because the American Left spent the past 16 years through the education system, rigged media, and toxic popular culture exorcising that spirit away like a demon.

Stoking the fires of national self-hatred is nothing more than a business decision for Democrats and an acceptable cost for advancement and political preservation.

The foreign nationals from the Middle East who infiltrated America and inflicted thousands of deaths and horrific destruction are not the villains the American Left wants when they’d much rather scream about a guy in a red cap waving a Trump flag.

As their collective maladministrations of America’s urban areas and soft on crime mentality have proven, Democrats fear loss of power more than loss of life…so long as the latter is not theirs.

Interested in more national news? We've got you covered! See More National News
Previous Article The Coming Consequences Of The Failed Recall Of Gavin Newsom
Next Article SADOW: Will Rescheduling This Fall’s Elections Change Any Of The Results?