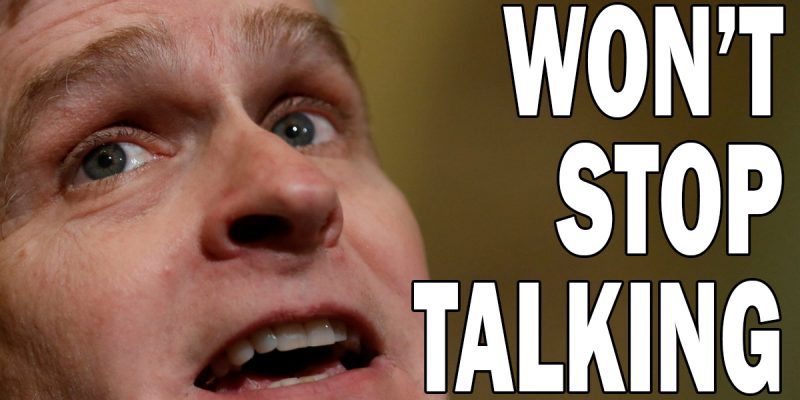 …the effects of that election continue metastasizing and dragging the American people into the depths of societal decline? Shouldn’t we try to understand how we got here, Sen. Cassidy?

Senator Bill Cassidy warned fellow Republicans on Sunday that the party will lose in the 2024 election if they continue efforts to relitigate the results of the 2020 election.

“If we relitigate 2020 over and over again, it won’t change the result in 2020, but we are sure to lose in 2024,” the Louisiana Republicans said on NBC‘s Meet the Press. “If we choose to look forward, bringing positive solutions to the American people who have needs, we win. If we choose to be bullied, we lose.”

Cassidy’s remarks came during a discussion with host Chuck Todd about Republican Representative Anthony Gonzalez’s announcement on Thursday that he will not seek reelection.

It was essentially the usual Cassidy – whining about the backlash being given to those Republicans who broke faith with their voters and threw in with the Nancy Pelosi impeachment mob in January of this year.

Everything about this is stupid.

When Hillary Clinton lost the 2016 election, the Democrats didn’t “move on” from it. They fed every moronic conspiracy theory they could, and in particular the Trump-Russia fraud that the Clinton campaign, through its Perkins Coie attorney Mark Sussman and its spin doctor political skunkworks Fusion GPS, had concocted and fed to the corrupt FBI.

And for two years they conducted an active sedition campaign against the Trump administration, which paid off in a massive midterm victory which reinstalled Nancy Pelosi as the Speaker of the House.

Doesn’t seem like there was any negative consequence to their failure to “move on,” and that was from an election which was more or less honestly conducted. The great allegation of Russian “meddling” in the 2016 presidential election was that a couple hundred thousand dollars was spent on Facebook ads.

As opposed to $400 million in Zuckerbucks being spent to turn local elections offices in heavily-Democrat areas into ballot-harvesting machines and to promote highly-suspicious, unconstitutional departures from state elections laws. Which gave a potato-brained addlepate incapable of running an actual presidential campaign, we’re told, the highest vote total in American history.

Bill Cassidy wants you not to question what happened in 2020, when America is burning down to cinders based on the abject lack of leadership that election produced.

We’re entitled to respond that what Bill Cassidy really wants is for people to forget that he voted for what he’d already said was an unconstitutional post-presidential impeachment, something the people of Louisiana had absolute contempt for his doing. And he wants the people of Louisiana to forget that he’s been nuzzling up to the treasonous, tyrannical and quite possibly illegitimate regime the questionable 2020 election has produced, in order to trail in a few shekels of infrastructure spending.

What are these “good policies” Bill Cassidy wants the GOP to run on? Deals he cuts on rearrange-the-Titanic-deck-chairs bills with the Chris Coonses and Mazie Hironos of the world?

Nobody should take Bill Cassidy’s political advice. He’s the most Washington General of the Washington Generals of the U.S. Senate. Bill Cassidy is committed to losing nonstop in DC, and then defending his Failure Theater politics in front of the home folks he hopes either aren’t paying attention or are getting their news from the Chuck Todds and Jake Tappers of the world.

Bill Cassidy is how you lose. He’s how you dispirit your base so they fail to turn out and throw the bums to the curb.

He’s the utter personification of why the Right has to move beyond “conservatism” and into Revivalism. There is no room for Bill Cassidy in a movement to rekindle America before she sinks beneath the waves; he’s no conservative in his own right, but he’s nonetheless an anchor tied to the feet of the conservative movement. Cut him loose, let him sink to the bottom and let’s retake our country next year animated by righteous indignation over the usurpation of power that was the 2020 election.