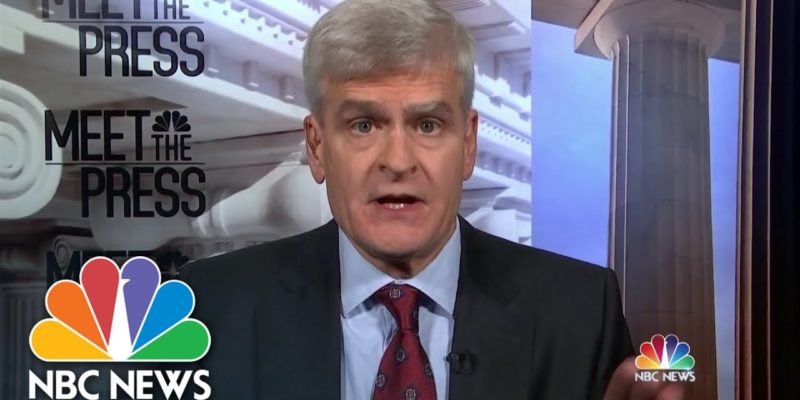 When Louisiana Republican Sen. Bill Cassidy voices concern over his party’s messaging for the 2024 elections, he really is delivering his relying on misdirection to promote a 2026 reelection attempt.

Since voting for conviction on impeachment of GOP former Pres. Donald Trump earlier this year, amplified recently by his acceptance of a demonstrably bad spending bill, Cassidy has won Strange New Respect from America’s leftist mainstream media, opening the doors for television appearances from networks in need of a pet conservative who will debase the principles he supposedly holds dear on air when needed. Such an opportunity arose for Cassidy this week on controversy about the fidelity of the 2020 election.

That came up on NBC’s Meet the Press, in the context of Ohio Republican Rep. Anthony Gonzalez’s retirement in the face of a difficult intraparty battle to retain his seat. As did Cassidy, Gonzalez essentially voted to remove Trump from office – after, of course, Trump already had left office – in voting to send forward the impeachment.

Predictably, when it had become clear district voters and his own party infrastructure had turned against him as a result of this miscue, rather than admit his failure to represent suitably his district through poor judgment of inventing a crime where none existed, Gonzalez cast himself as a “victim” by claiming his family received “threats” over his actions, necessitating his withdrawal from public service. This broad theme Cassidy picked up.

Cassidy put it in the context of a tactic to “relitigate” the 2020 election instead of focusing on 2024. He argues bringing up that past doesn’t change the result but can make the GOP miss opportunities to run on winning issues. He declared that Republicans shouldn’t allow themselves to be “bullied” into having to engage in critical analysis of their activities related to issues surrounding last year’s election resolution, especially at the expense of current issues.

It’s a good rhetorical trick, but a very transparent one. In essence, by mandating disallowance of discussion about that election outcome, that prevents any evaluation of actions taken by Washington Republicans about issues related to the validity of that election – including the Jan. 6 demonstration over that issue of election fairness that turned to unrest, which formed the basis for the impeachment.

Thus, by decreeing this topic out of bounds and bad for future party prospect, Cassidy seeks to immunize himself from any criticism over his spectacularly ill-informed and half-baked judgment on impeachment that disqualifies him for serious consideration as a worthy elected representative of the state. It is not so much good advice for winning elections as it is a craven plea to absolve himself from accountability to the Louisiana electorate for his own actions.

For an elected official to term as being “bullied” voter demands of responsibility from them for their plenary voting behavior demonstrates a fundamental disrespect of democratic norms that only reinforces Cassidy’s unsuitability. And it also makes him a hypocrite, for in the same broadcast he spoke about how politicians needed to “answer to voters,” while in the same breath trying to evade that.

Cassidy knows that he must extinguish the issue of his impeachment behavior prior to a potential run in 2026 for reelection or face a significant chance of defeat from a sensible conservative, and attempting to submerge that in 2024 election issues – through use of charged language like “bullied” – can make that flame low enough that it can’t rise enough to burn him two years later. It’s up to Louisianans to hold his feet to the fire on his mistakes by rejecting his invitation to let him escape the consequences of his actions.

Interested in more national news? We've got you covered! See More National News
Previous Article Hey, Bill Cassidy, How Do We “Move On” From 2020 When…
Next Article BLANCO: How I Became A Republican (and what I’ve learned since) Part II