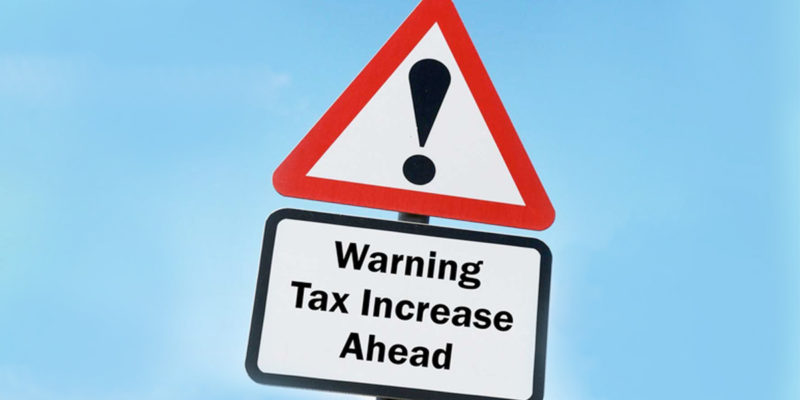 Now that President Biden and his squad have mangled American foreign policy and global prestige, they’ve now focused attention on the domestic economy in an unprecedented, harmful tax-and-spend blowout plan.

The House Ways and Means Committee recently released its proposed tax rate hike. The $2.2 trillion confiscation plan increases personal and corporate income tax and long-term capital gains rates, and significantly reduces the estate tax exclusion. It also finds other ways to punish success, but a broad segment of Americans will be hit with direct higher income and capital gains taxes, and the reduction in the death tax exclusion will slam heirs, farmers, and small businesses. The personal income tax hike to 39.6 percent kicks in at $400,000 per individual and $450,000 per couple, but the base increase combined with the 1.45 Medicare payroll tax, the 3.8% ObamaCare surcharge on investment income and state income levies brings the total to over 50%.

Many small businesses pay taxes through the individual code so these economic engines will also be especially hard-hit.

Despite the Marxist rhetoric, many couples have worked tirelessly for decades to achieve the $450,000 income level. They have raised families, paid tuitions, owned homes and served as good citizens. The left sneers on such success and effort as Alexandria Ocasio-Cortez flaunts a “Tax the Rich” statement across her backside while cavorting with other elites at the Met Gala, and Nancy Pelosi attempts to steal hard-earned taxpayer money to fund her special subway project in Silicon Valley for her Big Tech censors.

Corporations are also a target of the left with the top rate rising to 26.5% from 21%. Add state and local corporate levies and the 31% average rate places the US back to the highest in the developed world. Global investment and accompanying jobs will be lost as companies simply find it more profitable to locate in lower tax environments.

The 2017 Tax Cut and Jobs Act made America an attractive place for capital formation again as it brought back to the U.S. some $1.6 trillion in capital and stimulated solid economic growth and prosperity. And US companies impacted by the corporate tax hike will raise their prices, leaving the consumer with the actual tax payment. The American Enterprise Institute has concluded that a 1 percent increase in the corporate tax rate correlates with a 0.5 percent decline in real wages and a Congressional Budget Office report determined that workers ultimately pay more than 70 percent of the cost of corporate taxes. The increase in the top long-term capital gains tax rate to 25% from 20% will further discourage investment and business stimulation.

Seeking to ensure that financially successful parents and grandparents are limited in their ability to leave the fruits of their labor to their children, grandchildren and heirs, Congressional Democrats and the Biden Administration are proposing that the death tax exemption be cut in half to $5.5 million. This is a direct assault on individuals who have built a nest egg through life, paid taxes already on the accumulation, and wish to leave their offspring with the financial result. The death tax applies to all assets and properties so family farms and small businesses will undergo further punishment.

Adding to the adverse effects on individuals and families, tax increases stagnate overall economic activity while tax cuts help Americans and stimulate the economy. The Reagan Tax cuts resulted in a reduction in the unemployment rate from 7.5% in 1981 to 5.4% percent in 1989. The Federal tax revenue doubled from $517 billion in 1980 to 1,032 billion in 1990. Inflation fell from 11.8% when Reagan entered office to 4.7% when he left.

Biden and his Democratic cohorts are not interested in actually helping workers or business stimulation. They much prefer adherence to a radical agenda and punitive class warfare strategy.

Elections matter. The 2022 mid-term elections can not come soon enough!

Interested in more national news? We've got you covered! See More National News
Previous Article SADOW: Louisiana Has An Opportunity To Win Against Climate Change Hysteria
Next Article Hey, Bill Cassidy, How Do We “Move On” From 2020 When…