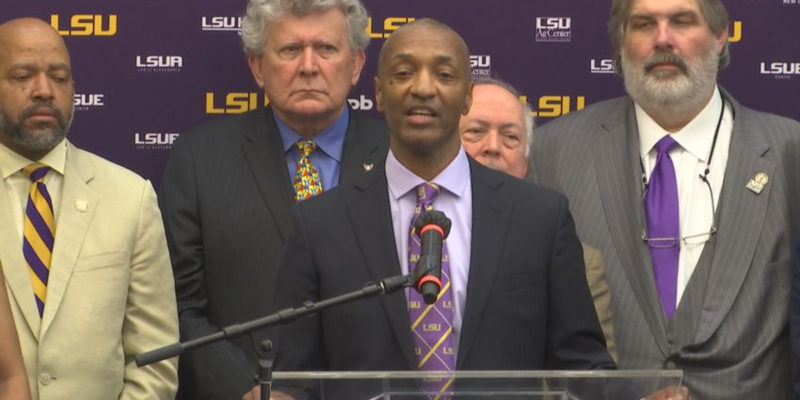 University administrations change, but the misleading narratives remain the same.

New Louisiana State University System Pres. William Tate has slipped seamlessly into the mode of recent such heads by poormouthing finances provided by taxpayers. Asked about why the flagship campus continues to descend in the magazine U.S. News and World Report’s ranking of universities, he stated “LSU’s overall rank fell largely because of two categories: financial and faculty resources, both of which are tied to funding.” He also alleged that “To improve will require significant state and philanthropic investments in students and faculty members.”

I’ll take his word about the mechanics of the scoring, since the magazine hides many of the details behind a paywall. But the implication that pumping wholesale higher taxpayer dollars into the school to compensate for a dearth of funding doesn’t bear any relationship to reality.

Before understanding why, keep in mind that Louisiana higher education could work more efficiently if it weren’t so overbuilt, with too many senior institutions chasing too few students. By way of example, it has about as many public universities as much more populated Illinois, while similarly-populated Oregon has a little more than half the number of Louisiana. With much less in the way of infrastructure, through consolidation or demotions to community college status, more existing money could find its way into classrooms.

That should be the first step taken, but the state’s political culture hasn’t yet evolved enough away from the idea that government has to spend and redistribute resources to certain constituencies. This includes an overreliance on more expensive senior-level education for underclassmen. Regardless, the notion that the state’s universities receive inadequate funding doesn’t hold up.

Consider that, given overall taxpayer resources, Louisiana more heavily relies on its taxpayers than the typical state. In 2019 (latest data available), the state ranked 23rd overall among its brethren in appropriations of state tax funding for higher education as a percentage of gross domestic product and has remained above the U.S. average since such recordkeeping began at the beginning of the century.

This indicates from where any increase in funds should come: tuition and fees, especially at the senior level. Louisiana ranked for 2020 in the bottom ten of net tuition, well over $1,000 below the U.S. average, even as it ranked 36th in per capita income adjusted for cost of living (2020 data). This implies a bit of room to grow in tuition, particularly at the senior level as net revenue compared to that from community college per full-time student is among the lowest of the states. Indeed, the student share relative to total funding for two-year schools is higher than that for four-year schools, one of just three states with that distinction.

As a result, Louisiana ranks almost last in revenue per full-time equivalent student, although this is deceptively low in that essentially any study past 15 hours a semester is tuition-free and Taylor Opportunity Program for Students money isn’t included (the latter of which largely explains why the state ranks fourth highest in aid delivered to students, at an average of over $2,000 FTE). In per capita terms, for fiscal year 2021 the state ranks 36th in total spending, exclusive of aid, and 31st relative to personal income.

These numbers demonstrate that, given ability to pay, Louisiana taxpayers are doing their fair share to prop up higher education, but that families benefitting from that education need to do more – including the quarter to fifth of students who receive TOPS tuition-free rides (ironically, LSU is increasing their own funding problems by permitting students who by Board of Regents rules shouldn’t be admitted to enroll, whose lower test scores disqualify them from TOPS and create greater waste by their higher proportion unable to complete degrees). Thus, students at the senior level should put a little more skin in the game to boost overall higher education revenues.

But Tate is correct about one thing: donations to academics need to pick up. LSU particularly has a bad history of donors giving more to the athletic side than academic, and explains why most recently the system ranks a paltry 120th of all American and Canadian universities in endowment size, tenth highest in the Southeastern Conference. The recent spate of “woke” actions by the university’s management, most coming before Tate’s arrival but of course given his background as a Critical Race Theory proponent his own hiring only exacerbated the phenomenon, cannot help the effort to increase LSU’s endowment.

Tate has misdiagnosed the situation when he calls for fleecing taxpayers for more funding. Before asking those overburdened individuals for more, higher education needs to fix its own house by right-sizing itself and by asking more from the direct beneficiaries of its services.