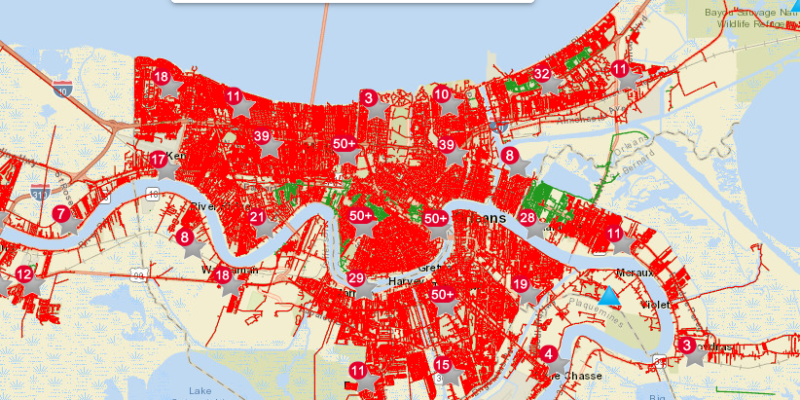 It’s conceivable, but the Louisiana Public Service Commission is trying to keep that from happening.

Commissioner Eric Skrmetta sent a letter to the White House yesterday urging some federal relief for electric ratepayers given the huge expense of bringing some 25,000 linemen in to rebuild the power grid after Ida pulverized it at the end of August. Most of the power is back on throughout Southeast Louisiana, though the places hardest hit, like the Houma/Thibodaux area, the south central coast and the River Parishes, not to mention parts of the Florida Parishes, haven’t had the lights come back on just yet.

Somebody has to pay that bill. It might be easier if the feds, who seem to be interested in throwing money around like drunken sailors, could fit that in while they’re throwing trillions of dollars out of helicopters.

Wrote Skrmetta, “Mr. President, I am urging you to assist our ratepayers by compelling Congress to expand the Stafford Act to allow the State of Louisiana to seek federal reimbursement aid for the 2020 and 2021 hurricane seasons.  The Robert T. Stafford Disaster Relief and Emergency Assistance Act already allows electric co-ops to recover restoration costs for hurricane losses. It seems fundamentally unjust to further burden ratepayers of investor-owned utilities with substantial storm restoration costs while consumers of electric cooperatives are spared those restoration fees on their monthly utility bills.  I must note that it was only a year ago that the people of Louisiana finally completed paying storm recovery fees created from the damage of Hurricane Katrina in 2005.”

Skrmetta added, “Sir, it would be sound public policy if the federal government would help mitigate a consumer’s financial impact derived from a natural disaster.   If you do not deem it prudent for Congress to amend the Stafford Act to allow investor utilities to seek federal reimbursement of storm restoration costs without ever burdening ratepayers, perhaps you will consider approving a dedicated Community Development Block Grant to cover investor-owned utility storm costs.  Every penny saved by the utility companies on storm costs is a direct offset to the consumer’s monthly bill.  Mr. President, on behalf of the million plus residents and business owners that I represent, I ask humbly “Will you help us?”

Skrmetta noted that Louisiana endured a historic number of tropical storms and hurricanes in 2020 and the damage from those storms cost ratepayers over $3 billion in storm restoration costs.  He further notified the President that the damage caused by Hurricane Ida “will result in the highest restoration costs in Louisiana history.”  Said Skrmetta, “Our utility ratepayers need relief.” 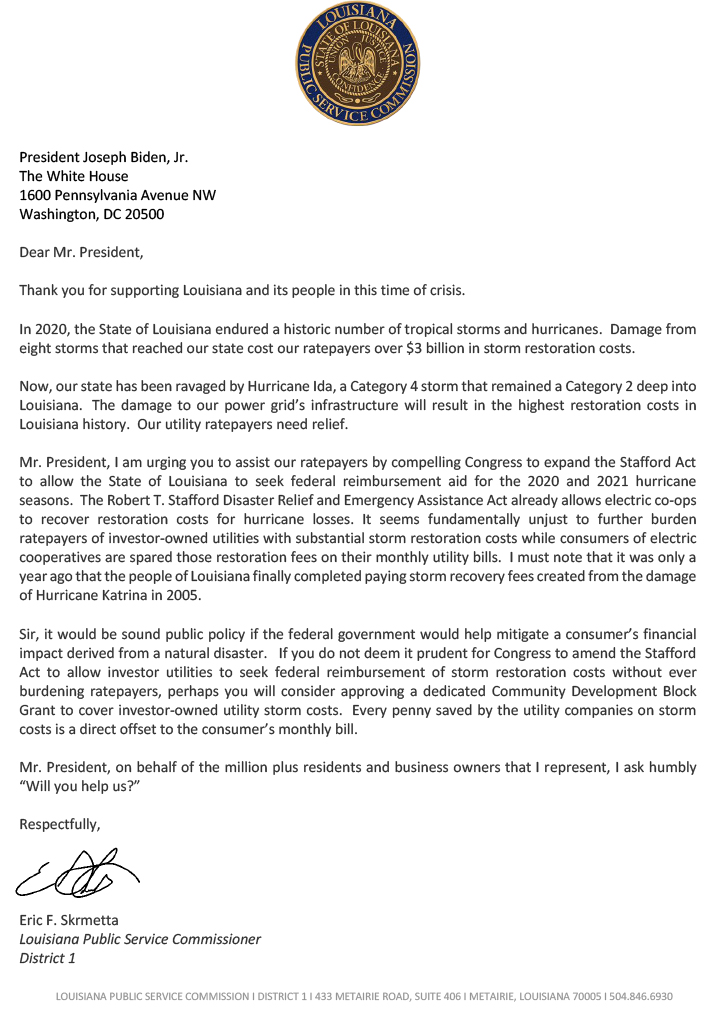 What he’s talking about when he mentions co-ops as opposed to investor-owned utilities, in case you’re missing this, is important.

Demco, which has 113,000 customers in the Baton Rouge area and Florida Parishes, is a co-op. If you’re a Demco customer you’re a member of its organization.

Entergy and CLECO, on the other hand, are investor-owned utilities servicing electric customers in Southeast Louisiana.

The Stafford Act allows the co-ops to get federal reimbursement for the cost of restoring power. Right now it doesn’t allow that for the investor-owned companies. So with 30,000 power poles knocked out by the storm that had to be restored and a cost of likely more than $1.5 billion to restore electric service for Entergy and CLECO customers alone (they’re more than three-quarters of the affected customers), you’re looking at some pretty hefty rate increases passed down to the ratepayers in order to cover these costs if the feds don’t help.

This is basic governmental competence here. Biden is talking about $6 billion to settle Afghan refugees in America. Spending $1.5 billion to keep utilities from being bankrupted or utility customers from having their light bills explode doesn’t seem like all that terrible an ask.