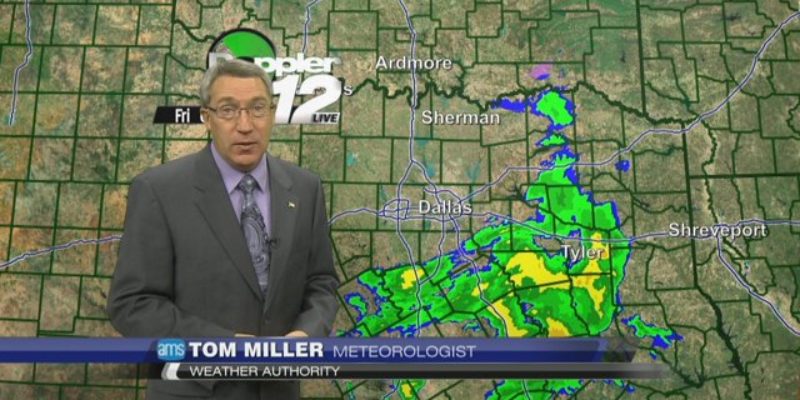 A beloved fixture of the North Texas and Southern Oklahoma airwaves apparently had a choice to make that is becoming all-too-familiar lately:

Take a COVID-19 vaccination or lose your job.

Tom Miller, who held a chief meteorologist post at KXII-TV, Channel 12, for the last 33 years, announced his last day in the humblest of ways: at the tail end of his daily no-fuss text forecast for the Sherman-Denison, Texas, and Southern Oklahoma areas:

That’s all he wrote. The Hayride could find no other statement from Miller, a married father of two. Nor were any press releases or social media statements posted by KXII-TV, or their affiliate companies CBS, MyNetworkTV, or FOX. And with each of the networks under vaccine policies of their own, other media sources have been silent.

KXII-TV is owned by Atlanta-based Gray Television, which in mid-September fired Upper Peninsula meteorologist Karl Bohnak — also a veteran weatherman of 33 years. In related coverage, it was learned Gray Television had instituted a policy where all managerial-level employees would be required to take a vaccine. A reporter and a sports anchor were recently dismissed underneath Gray’s umbrella.

Miller may have been as “a sheep before his shearers.” But it was his viewers that did all the talking. Rumors of the alleged firing lit up social media like a lightning storm rolling across the grassland prairie. According to an announcement from the moderator of the Grayson County (Texas) Conservatives Facebook Page, an after-work-hours event was held outside the KXII-TV studio to protest.

Tom Miller has been a face many Texoma residents have grown to love & been a part of our households for the past 33 years. Unfortunately Tom’s medical freedoms are being infringed on. If he doesn’t take an experimental medicine that was rushed on the market, has been responsible for over 700,000 adverse reactions & over 15,000 deaths in the US & the makers of the of it are totally exempt from liability if an adverse event occurs, does not stop you from getting our spreading a virus that has over a 99% survival rate & violates his personal & religious beliefs Tom will no longer have a job as of October 1st. Regardless of where you stand on the shot the infringement of our personal & religious freedoms should be alarming & I totally support Tom’s right to choose. Feel free to email the general manager of KXII [email protected] & let them know how you feel about their decision.”

Miller did not appear to be involved in any scandals, controversies, or internal disputes at the time of his dismissal.

From the hip: “Texomaland,” as Miller and his colleagues frequently call the region, has one more television station — an NBC/CW/ABC affiliate, KTEN-TV, Channel 10, who would be wise to offer Miller a paid meteorologist emeritus post and tap into his decades of experience and local star-power. Dallas-Fort Worth and Oklahoma City TV signals come in fuzzy on terrestrial antennae (or not at all in certain cable package deals), but the Red River area is loyal to their home stations as they are their high school sports teams. To unceremoniously bench a seasoned quarterback like Tom Miller won’t end well, especially for a smaller-market station on a thin line in terms of advertising revenue.

But on the other hand, if Miller is engaged in an employment contract dispute which lands in court, he might end up in a more lucrative position via which to retire more comfortably. If anyone has the gravitas to win a wrongful termination lawsuit — even against the suits at FOX Networks — it’s your local weatherman.

UPDATE (10/5/21): Information on Gray Television and other dismissals included.