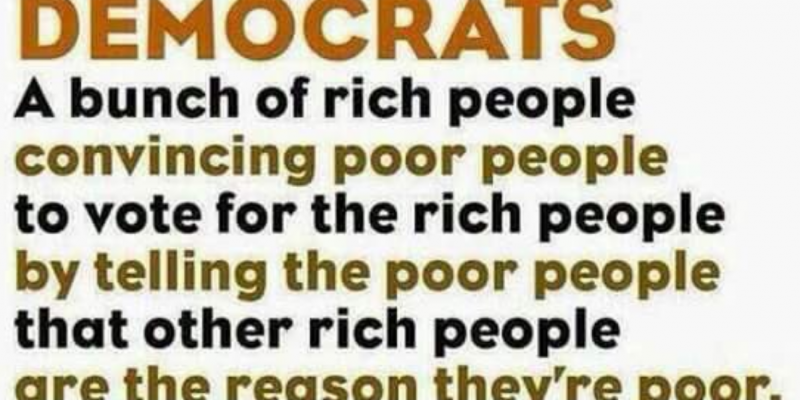 In the United States, we are so spoiled that we can complain about the most ridiculous things. We complain about being thrown into Facebook jail and being shadowbanned, but then we refuse to leave Facebook. Turn on any talk show radio station in the nation while in the drive home hour and you’ll hear the most emotionally charged screaming about the most miniscule problem and moreover, people calling in telling us what they think the government should do to solve it. We have people who whine incessantly about being oppressed while they have no clue just how oppressive the conditions that some people in the world actually have it.

We have people who are so selfish that they demand that their college education be paid for by people who didn’t go to college. If it’s free, it has to be provided by somebody, so either they expect the educators to provide that labor for free, or somebody else must pay for it. In doing so, it’s the taxpayers on the hook for it, many of which never went to college. It’s selfish to the core to think others must work so that they can provide for you.

But is it not true with health care also? That some people think it’s their right to live forever at the expense of others? They don’t care if the medical staff earns a living, they should provide it for free or somebody else should have to pay for it. That they are so privileged as to think they should be able to pursue their career as a gamer or a social media influencer while complaining about other people’s “privilege.”

This is the core value of socialism, and it’s a system of slavery, one in which a few live off the blood, sweat, and tears of many others. Born into rights of the fruits of another. That they have a right to decide for others what they are allowed to say. That they get what they desire and the masses get the crumbs swiped off the table. These people live in a fantasyland in which they’re the elite and the royal, but it’s a nightmarish dystopia for the masses if those fantasies are applied to the real world.

I’m sure some will say that isn’t capitalism the same? But in a free capitalist society, labor is not owned. If you don’t like your job, you can quit or you can change your mentality and earn a promotion and a raise. If you don’t like what your job pays you, go find one that does. You don’t have to stay in a job that you’re unhappy in. But in a socialist society, what job you have is dictated to you by others, it’s what you do, and you have no say in it whatsoever. The royals who take the fruits of your labor also decide for you what labor you do.

The “moderate” wing of the Democrat party is represented by Joe Biden, John Bel Edwards, and even, they tell us, LaToya Cantrell, yet they are so extreme that they would rather caucus and side with extremists like the anti-Semite Ilhan Omar, or “democratic socialists” AOC and Bernie Sanders than to leave the Democrat party or reclaim it from the Hard Left. Those “moderates” value party loyalty over liberty or even common sense – and all that’s left to galvanize them is a hatred of Republicans.

Baton Rouge’s Mayor Sharone Broome, once thought a reasonable voice in the Louisiana Democrat party, now values party loyalty while she oversees the demons of misery as they invade many Baton Rouge mothers’ lives. The party demands absolute loyalty, and traditional tax and spend liberals like Manchin are being Trotsky’d out of the party.

West Virginia’s moderate Democrat senator Joe Manchin, on the other hand, should go and form his own party. I’m sure quite a few sane Democrats would abandon their now unrecognizable party, and other elected officials might just join him. Manchin probably could even recruit less-taxes-bigger-government Republicans like George Bush, Mitt Romney, and Liz Cheney to join him. Or he could just primary Joe Biden. I’m sure Manchin can figure something out.

It’s not just Biden, it’s the entire Democrat party that’s gone off the deep end. In the past week, we’ve found out that Pete Buttigieg didn’t want the job of Transportation Secretary, he just wanted the money, damn the people. And Anthony Fauci strives to outdo Josef Mengele with his unnecessary and cruel experimentations on puppies and disabled children, the weakest among us. It’s not enough that the President lies for the sake of lying, but every day it’s something new, and disgustingly so. The brightest spot that the left point to is Jen Psaki. Imagine that, can you think of one Press Secretary of any of the previous presidents who were more memorable than the President?

The Democrats are speaking with one voice, from Biden, JBE, Cantrell, Broome to AOC, Omar, Talib, and Cuomo. They are telling you who they are, you’d be wise to listen to their actions. After all, you don’t want to end up on one of Fauci’s experimental tables.