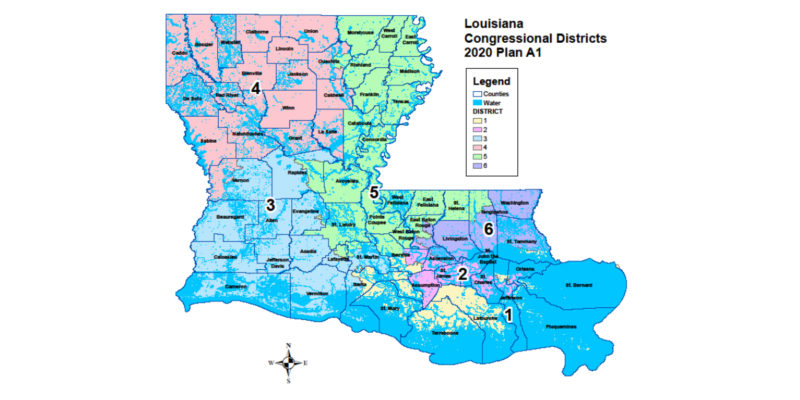 As the Joint Governmental Affairs Committee of the Louisiana Legislature hits the road to start discussing reapportionment of the state’s congressional districts next year, one of its leaders thanked members of the state’s political left for playing as it started the process of posterizing them.

Earlier this week, a group of the usual suspects issued an open letter to the panel of members of the governance committee in each chamber, who are charged with deriving the state’s new map for discussion – and inevitable passage almost entirely unchanged – for the six districts. This occurred just before the committees began a tour of metropolitan areas across the state to gather public input on their task.

The note stumps for the drawing of two majority-minority districts, where one now exists, presenting several scenarios. Selectively drawing from reapportionment jurisprudence, it alleges the law “likely requires” that, given that 31.4 percent of the state’s population according to census data are ethnically alone black, two such districts must come into fruition, and issued a veiled threat of litigation if that doesn’t happen.

Each map produces a pair of districts with black majorities of just over 51 percent. Each map also has enormous constitutional problems, because while these bend over backwards to create the two districts, they violate other standards of constitutional reapportionment. To begin with, particularly in the instance of a majority-majority district drawn in the southeast corner, these sacrifice compactness (having districts with fewer sides) and make contiguity (not separating areas) a near joke with incredibly narrow corridors in some instances connecting various areas, conditions that would make a court heavily consider whether these maps engage in the unconstitutional practice of drawing lines making race the predominant consideration.

The Legislature already adopted principles for redistricting that for Congress doesn’t mention compactness, but does demand contiguity and (besides affirming the constitutional need for equal population accounts per district) employs two other criteria used to determine whether race becomes a dominant feature in a plan. It pledges to consider traditional district boundaries as practicable given other criteria, including a preference not to split precincts, and to protect communities of interest as practicable. The latter concept it doesn’t define, but legally this typically means something along the lines of a group of people with social, cultural, racial, ethnic, and economic interests common to the population of the area, which are probable subjects of legislation.

This the leftist letter plans violate repeatedly, in two ways. The current map only splits two metropolitan areas, part into one district and the other parts into unrelated districts. All the letter’s plans split four or five such areas, sometimes two into parallel adjacent districts. Also, in doing this, meandering districts of tremendous length crisscross the state that connect areas far apart while splitting nearby communities, creating maps that resemble Rorschach tests; the current map has just one district resembling this extension and otherwise has relatively compact districts, while the letter’s feature maps with either or both of multiple extended districts or inkblots defying compactness.

The demand letter may not have gone unnoticed by Senate and Governmental Affairs Committee Chairwoman Republican state Sen. Sharon Hewitt, when asked to comment about the joint committee taking it to the streets. She indicated a primary objective of the tour was “We want to know which groups of people see themselves, in a geographic area, as a Community of Interest. And one of our principles in redistricting is trying to keep those Communities of Interest together.”

Translation: the final congressional map coming from the committees with large GOP majorities will minimize as much as practicable splitting larger populations in geographical areas. And that means tossing the leftist maps into the dustbin and disregarding any threat to try to impose them – which surely committee members know would fail as if they produce a map something like the present one it will past constitutional muster, and more likely so than the leftist drawings.

Hopefully, the committees will continue to resist this intimidation from the left and by early next year slam dunk into law over the left this kind of map and others for other offices built on its same principles.

Interested in more news from Louisiana? We've got you covered! See More Louisiana News
Previous Article Biden, Garland, Jeff Landry And The School Boards Mess
Next Article ALEXANDER: “I Don’t Think Parents Should be Telling Schools What They Should Teach”