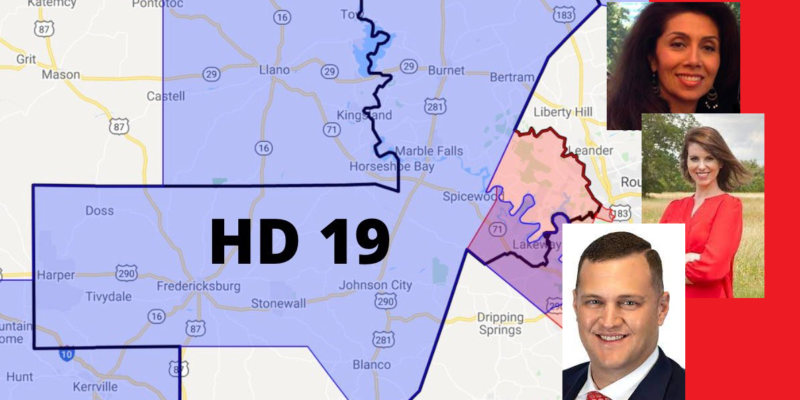 Two Austin-area legislative candidates were hoping to be the dynamic duo in the 2022 cycle to regain Republican turf in the notoriously liberal metro area in Texas.
Former Austin City Council member and real estate agent Ellen Troxclair and former Texas House District 47 GOP contender and Austin police officer Justin Berry were on friendly terms. They shared campaign events, social media posts, and even speaking engagements. Troxclair was running for Texas Senate and Berry for a redux of his 2020 Texas House district fight, which gave freshman Democrat Vikki Goodwin her first term.
Then along came redistricting, which drew HD 47 to slightly favor Goodwin for another term. Established Republicans such as Lt. Gov. Dan Patrick and former Gov. Rick Perry aligned quickly behind former Texas Sen. Pete Flores of San Antonio (even before the new district lines were heard in a legislative redistricting committee). Flores announced he would again throw his hat in the ring for Senate District 19, which was drawn to extend northward into the Austin area — and into Troxclair’s home turf.
After a few days to reassess, Troxclair switched to House District 19 — immediately to her west and which would require a move for her and family. HD 19 is currently represented by Rep. James White, who is currently hoping to unseat Texas Agriculture Commissioner Sid Miller in the 2022 GOP primary.
As an alleged surprise to Troxclair, Berry announced he would also be moving to HD 19, pitting the formerly friendly candidates against one another and Rep. Kyle Biedermann, who currently represents a district just west of HD 19. HD 19 consists of five counties: Burnet, Blanco, Kendall, Gillespie, and a small sliver of Western Travis County. It would have been Biedermann’s race to lose, and he has property in the newly drawn district, he could easily move there, and it consists of much of his existing area of influence.
“I’m surprised to hear that Justin Berry may be giving up on opposing Vikki Goodwin in HD 47 to run against me in HD 19 instead,” Troxclair wrote via Twitter. “I announced for HD 19, an entirely new district w/5 counties, weeks ago. HD 47 was 1/8 of Travis [County]. Quite a stretch to act entitled to it.”
Berry suggested that he had talked to Troxclair of his intentions for HD 19 the day before. The Austin Police Association, likely at Berry’s suggestion, began attacks on Troxclair’s record on police funding issues. It appeared Troxclair and Berry would devour one another before turning on the incumbent.
Then on Friday came an announcement that Biedermann would not seek re-election.
Enter Nubia Devine: former legislative staffer, wife of Texas Supreme Court Justice John Devine, and religious freedom activist. Devine made a soft announcement of her intention to run Friday morning, The Hayride has learned.
Exit Rep. Terry Wilson, a Republican whose home was drawn into HD 19 but who has announced he will seek to represent HD 20 instead.
Much is known about Troxclair and Berry already, but who is Devine?
Devine, a Colombian by birth, grew up in Venezuela, where she completed her high school studies with ambitions of becoming a commercial pilot. Her family later emigrated to the U.S., first in Miami and then settling permanently in Houston. There, Devine was a translator for Ed Young, pastor of Second Baptist Church, one of Texas’ largest churches. Living in Houston, she met John Devine, now her husband of more than 30 years. Together they have seven children and four grandchildren.
Devine has worked for numerous ministries and crisis pregnancy centers, in addition to serving as constituent liaison for Austin City Council District 6 and conservative Council member Don Zimmerman, as well as a staffer for conservative Republican Reps. Biedermann and Briscoe Cain. She is founder of the Esther’s Council initiative, a women’s organization within the U.S. Pastor Council.
Analysis:
Troxclair picked up an early endorsement in the form of Burnet County GOP Chairwoman Kara Chasteen. Berry is heavily favored by law enforcement associations riding hot from resisting the Defund the Police movement.
But so far Devine is the only resident of the district. This is significant considering the small town vibe of many of the communities in the district.
Though Devine recently moved to the Marble Falls area (in far western Travis County) the Devines’ former home was located in the then-yet-to-be-drawn HD 19. She’s a local. And she may be the more socially conservative of the three, which will also be a major factor as Republican primary voters head to the polls.
But open seats can often generate crowded fields, and more candidates could announce in the days ahead. In the meantime, Devine comes in as a strong candidate which will almost assuredly trigger a runoff.
Filing deadline for the 2022 primary is Dec. 13, 2021. It is uncertain when the Texas primary will take place though it is currently scheduled for March.
Interested in more news from Texas? We've got you covered! See More Texas News
Previous Article Quote Of The Day, October 28, 2021
Next Article REVIEW: ‘Star Trek: Prodigy’ Appeals To ‘Clone Wars’ Fans, Not Graybeard Trekkies