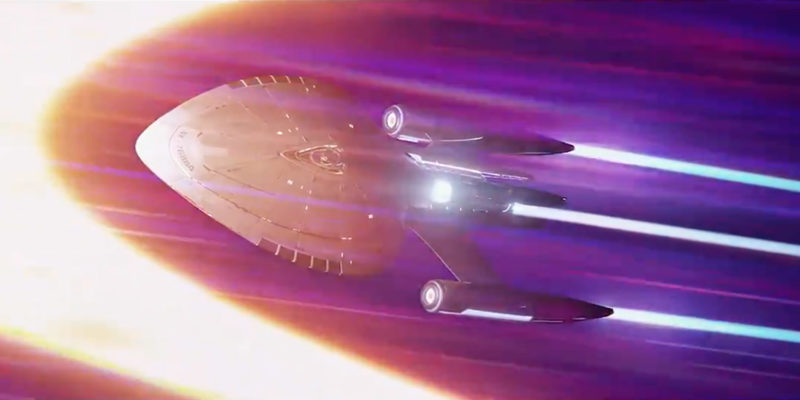 When it comes to the Star Trek universe’s newest offering, “Prodigy,” CNN surprisingly had the most prescient review so far:

Paramount has already sought to grow the “Star Trek” brand via animation with the comedy subtitled “Lower Decks,” but takes another stab that feels conspicuously like a “Star Wars Rebels” wannabe with “Star Trek: Prodigy.” Paramount+ obviously has ample shelf space, but this Nickelodeon series (where it will play later) doesn’t exactly blaze memorable trails.

The presence of Kate Mulgrew from “Star Trek: Voyager” as the voice of a hologram version of Captain Kathryn Janeway provides a peripheral connection to the “Trek” universe for those greybeards who might tune in with (and possibly without) their kids and grandkids. Beyond that, the show mostly just transparently trades off the “Trek” title without feeling like it’s going anywhere, boldly or otherwise.

(“Graybeards.” Ouch!  Well, we are grownups watching a kids’ cartoon.)

But it’s with that realization that the business end of ViacomCBS is putting its money on recruiting a next generation of Star Trek fans — this time by opening up a CGI-heavy series that will hopefully appeal to younger audience the way Star Wars’ “The Clone Wars” and the aforementioned “Rebels” have. But the similarities are painful, especially for longtime Trekkies.

Previous entry “Star Trek: Lower Decks” slowly came into its own (defying our own, earlier pessimism) by tapping into Trek lore and themes beloved by fans, young and old alike. “Prodigy” is also just beginning, but on a sour note with fans for being a blatant, full-blown Star-Wars-ification of what is supposed to be Star Trek.

The premiere episode “Lost and Found” starts with young, purple-hued mine colonist Dal (voiced by Brett Gray) being pursued by the villainous “Diviner” (John Noble), who believes Dal can help lead him to the mysterious “Fugitive Zero.” The muddled plot involves Dal meeting others along his way to a Voyager-esque Federation starship, the U.S.S. Protostar, which is inexplicably buried in the mine. This is where we learn that Fugitive Zero (Angus Imrie) is hiding inside — an ethereal Medusan, a non-corporeal species we first encountered in the ’60s “Star Trek” (this one built a robot body to conceal Medusans’ blinding, madness-inducing effect on humanoids).

We also meet Gwyn (Ella Purnell), a teen who would rather explore the stars than live in hopelessness on her father’s mining colony, Jankom Pog (Jason Mantzoukas), a porcine Tellarite with a penchant for machinery, and Rok-Tahk (Rylee Alazraqui) a rock-like Brikar (yes, her name sounds like “rock talk”). There’s also a blue blob named Murf, voiced by Dee Bradley Baker, also of Star Wars animated fame (hmmm …) and appearing an awful lot like Yaphit from rival sci-fi offering “The Orville” (rest in peace Norm Macdonald).

How these youthful scamps all came together is mere details (no real spoilers here that weren’t already revealed in trailer videos). In short: they hatch a plot to kidnap Gwyn and hijack the Protostar. The Diviner’s robotic enforcer, Dreadlock, transforms in Decepticon fashion and attempts to shoot down the absconding youngster as they somehow know just how to operate the Protostar’s advanced navigation and helm interfaces.

Predictably, but after some impressive CGI effects, the Protostar escapes the mine planet. When the word “help” is finally uttered in casual conversation, a holographic Janeway appears, at which time we learn that we’re several years after the U.S.S. Voyager’s return to Earth according to the Trek timeline.

Some suspension of belief is required with kiddie-fare and televised sci-fi alike. But here we are left feeling that the crew already knows how to run the ship’s main functions instinctively, and holo-Janeway is thus a mere nod to fan nostalgia rather than the indispensable instructor we were led to believe she would be in all the preview hype.

“Prodigy” seems to suffer from the same hyperactive acrobatics and starship stunt-flying that leave classic Trek’s more realistic pacing and physics behind. It was refreshing, however, to see a return to the beam-style phaser weapons on board the Protostar that we’ve come to know and love from previous series.

It’s Nickelodeon, and the show has not (yet) delved into the social justice polemics and postmodern sexuality sermonizing we’ve come to expect in other recent Alex Kurtzman-directed Trek series such as “Discovery” and “Picard.” There, was however, a bizarre moment where Dal appeared to pray to himself that he would make it away from killer robots alive, and that’s about all that would rankle Hayride readers.

So far, “Prodigy” is hanging on to a 74% audience score on Rotten Tomatoes, which is much higher than the initial reviews for “Lower Decks.” The production values are high, the animation dazzling, and this writer’s seven-year-old son kept his eyes glued to it the entire time. Based on these factors, it’s looking like the Star-Wars-ification of Star Trek will live long and prosper while “graybeards” give it an illogically raised eyebrow.