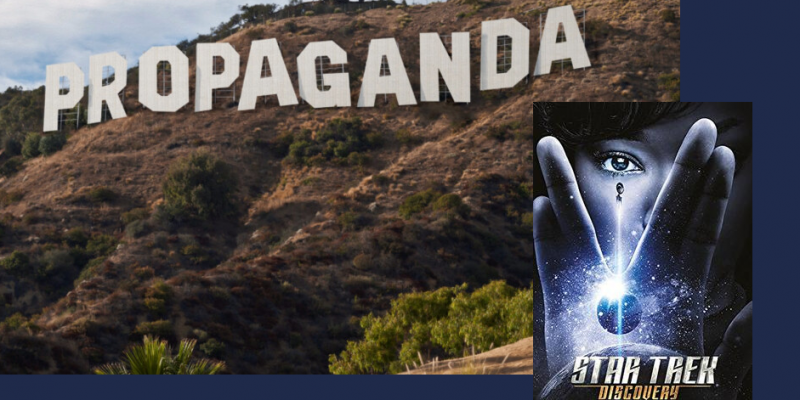 Loyal Trekkies have been left scratching their heads as to why new “Star Trek” series entries under ViacomCBS’s oversight have left the Final Frontier in exchange for present-day social justice rambles and where every other liberalism-fueled show has gone before.

Now we know. In a press release, ViacomCBS announced the upcoming debut of “the franchise’s first non-binary and transgender characters” on season 3 of “Star Trek: Discovery.” But what was said in a quote fully explains the recent banality (and diminishing interest in the series) in a nutshell.

“We take pride in working closely with [actors] Blu del Barrio, Ian Alexander, and Nick Adams at GLAAD to create the extraordinary characters of Adira and Gray, and bring their stories to life with empathy, understanding, empowerment and joy,” said Michelle Paradise, one of the show’s co-showrunners and one of numerous executive producers (emphasis ours).

A word about Adams: She is the Director of Transgender Media Representation for GLAAD, or the Gay and Lesbian Alliance Against Defamation. Her job, created in 1998, is to tell the mainstream media and Big Hollywood what they’re doing wrong. From her bio:

… In 1998 he created the transgender section of GLAAD’s Media Reference Guide, which included best practices for reporting on the transgender community – standards that the Associated Press, The New York Times, and other media outlets subsequently used to improve their own style guides. While researching and reporting the interview with Caitlyn Jenner, ABC looked to GLAAD as a valuable source of information on the issues affecting the transgender community, frequently tapping Adams’ resources and expertise. ABC News also used GLAAD’s Media Reference Guide, along with quotes from Adams, in materials created for ABCNews.com to accompany Diane Sawyer’s interview.

Adams is a resource for Hollywood creatives writing stories about transgender people. He has worked with hundreds of films and television shows to help them create more realistic, multi-dimensional transgender characters, including: Degrassi which won a Peabody Award for its inclusion of a transgender teen; Glee, which worked with GLAAD to recruit a 200-person transgender choir; and The Bold and the Beautiful as it chose to disclose that one of its lead characters is a transgender woman. Adams worked with Electronic Arts as it created the trans-inclusive update to the The Sims. He also worked closely with CBS and Survivor, as they told the story of a trans player being outed on the show. He has conducted presentations on how to fairly and accurately portray transgender people to high-level executives at NBC, CBS, Netflix, Showtime, FOX, Viacom, E!, Bravo, Oxygen, MSNBC, The New York Times and many more. He also works with the Casting Society of America to ensure transgender roles are cast more authentically.

Adams, herself holding out as a transgender man, started an organization for parents who allow their children to “transition,” which often involves hormone injections and plastic surgery to become like a male or like a female.

Being such a central influence in the direction of the show, Adams may very well appear in the credits once “Discovery” premieres on Oct. 15 via streaming service CBS All Access.

From the hip: All discussions on sexual ethics aside, a matter of creativity must be addressed.

“Discovery” seasons 1 and 2 were truly bizarre — a prequel to the classic 1960s series but with way-advanced technology that could wisp a space-faring vessel to a far-flung part of the galaxy in the blink of an eye, made possible by an exploited and endangered giant tardigrade that feeds on interstellar matter, and powered by fungal spores. The show left on another odd note: the crew and ship being transported 900 years into the future — presumably where they can do no more harm to the franchise canon. We’ll leave it there, but it was so bad that not even the introduction of prototypical U.S.S. Enterprise Captain Christopher Pike in Season 2 could right that ship.

While the plot details in “Discovery” often seemed half-baked (and, arguably, ripped from other sources), the political/ideological push was much more orchestrated and center-stage. The main character was a yet-unheard-of adopted sister of Mr. Spock but must save the day repeatedly and outperform everyone onboard because she’s a strong female lead. The two pre-existing gay characters, the ship’s chief engineer and chief medical officer, also get plenty of limelight, all to teach a moral lesson. While moralizing is part-and-parcel to the Star Trek legacy, incoherent and nonsensical plot points are a denial of science fiction as a genre.

With the mention of GLAAD’s involvement, we have a better picture of the arm-breaking and social pressures taking place behind the scenes. These new Trek entries are fueled less by science fiction writers dreaming out loud but progressive activists using sci-fi as a bullhorn.

Let’s put it this way: Imagine how angry your typical Hollywood liberal would be if ViacomCBS was consulting the NRA for advice on how to accurately craft a security officer character. What about bringing in Focus on the Family for a little script-doctoring involving a ship’s counselor’s lines (or a chaplain — it is a prequel, after all)? Or how about recurring Zoom meetings with Americans for Tax Reform on how to best approach a pre-contact Ferengi character with a penchant for free enterprise? They would be furious — and absolutely correct in that such meddling dilutes the creative direction of any work of fiction (cases in point, after school specials from the 1970s designed to instruct teenagers, or Evangelical films made primarily to convert a soul).

Yes, there are script consultants and various experts brought in to many aspects of a production. But this takes it to a whole new, PC level with the creation of not one but two characters, and the script-writing and other production work it will take to weave them in.

It’s not that Trek hasn’t explored “strange, new” sexuality before, but it did so in a way that challenged our contemporary preconceptions and understanding of biological science. There have been more than a couple of alien races introduced that had no clear gender, and the well-loved Lt. Jadzia Dax from “Star Trek: Deep Space Nine” whose internal symbiotic creature has lived in a variety of bodies throughout its life, both male and female. And there was that one classic episode where Captain James T. Kirk’s ex-lover forced him to switch bodies and … we digress. But to suddenly beam in the same, tired social arguments we tangle about on social media here in the year 2020 is a betrayal of series that once dared us to explore and imagine.

Perhaps “Discovery” is now neither science nor fiction, but mere political fantasy.