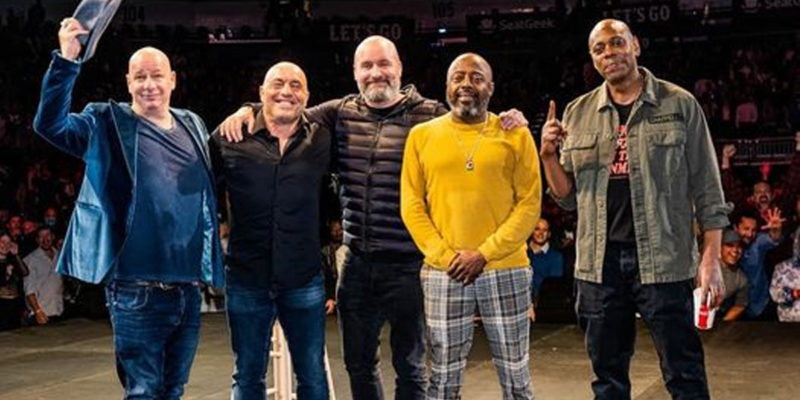 We are living in truly strange and interesting times. Who would’ve thought that the Mount Rushmore of Popular Culture Figures boldly standing up for individual liberty and freedom would include the countenances of Dave Chappelle, Joe Rogan, Nicki Minaj, and Jonathan Isaac.

Yet here we are in this masked up society where expression is restricted by “seek and censor” algorithms, social media informants, and indoctrinated leftist cyber-commissars.

And that’s before your livelihood is jeopardized by arbitrary actions by the state and their corporate collaborators for not agreeing to two shots of COVID vaccinations, which landed  the Trinidad-born rapper Minaj and the Orlando Magic forward Isaac in the media’s crosshairs for their publicly-stated reluctance to take the jab.

Podcast sensation Rogan has had his own row with CNN in particular over the talk show host’s use of Ivermectin to treat his bout with COVID-19.

Ivermectin is an antiparasitic drug that has been used on both humans and livestock. There are hundreds of medicines that are broadly used on both two-legged and four-legged patients, including certain antibiotics.

While Rogan claims Ivermectin helped hasten his recovery from the coronavirus, CNN denigrated the comedian on its programs though network medical expert Dr. Sanjay Gupta conceded that his network crossed a line with his colleagues on-air comments.

The humor was decidedly blue – a continuation of the stuff of Redd Foxx and Richard Pryor, though segued between the sexual raunchy commentaries and drug fueled experiences that reflect the current coarseness of society, the headliners touched on more relevant and serious topics about the country we live in, race relations, and eroding freedoms.

And they did so before a remarkably diverse crowd in terms of race, culture, income, life experience, and politics.

Rogan took the center stage before Chappelle, referencing his CNN experience and his own trip through the cancel culture gauntlet over his documented casual use of racial epithets and other verboten words.

Though an experienced communicator through his Spotify-based web streaming program, Rogan’s stand up  delivery was crisp and energetic and drew laughs from across the audience spectrum.

Rogan attracts north of ten million listeners per episode- around 2/3rd’s of what Rush Limbaugh attracted on the radio.

Though the biggest pop of the night was when Chappelle made his way out.

The star of the last truly funny movie Mel Brooks directed (Robin Hood: Men in Tights), Chappelle sipped alcohol, chain-smoked, and may very well have also been high throughout his set.

Starting off with an anecdote about an intruder on his property screaming racist language and his related dealings with the court system, Chappelle come off mellow if not somber while playing raconteur about being targeted for comments about transgendered in his Netflix special The Closer, where he aligned himself with “Team TERF” and besieged Harry Potter author J.K. Rowling for refusing to accept the validity of merely self-professing a different identity from birth truly makes someone a different sex.

Considering the caustic nature of Chappelle’s jokes that established him as the country’s dominant comic, it’s ironic that his comments about the smallest segment of the population would produce the most media backlash.

Chappelle has mercilessly lampooned unflattering stereotypes that incited plenty of hilarity and no hate in an increasingly uptight world where politically incorrect conduct and words invite far more severe consequences than actual acts of violence (see the NFL’s double-standard particularly when it comes to the treatment of those accused of assaulting women).

Chappelle closed his gig out with a curious reference about the military service of former slaves in both the Union Army and the Confederacy during the Civil War and imparting the need for people to be prepared to forgive themselves for previous transgressions and to possess the courage to be kind to others.

Weary but still defiant in the face of the Cancel Culture forces, Chappelle ended his routine unbowed, promoting goodwill but offering no apologies.

On this night those who shout Let’s Go Brandon and Black Lives Matter sat next to each other, pondered the respective and at times intertwined messages offered by an internet influencer and comedic icon, and laughed together under the same roof.

Needless to say the media, particularly Rolling Stone’s review that was a prefabricated piece that contained scant references to the actual show, crapped all over the show though few attendees walked out the Smoothie King Center disappointed.