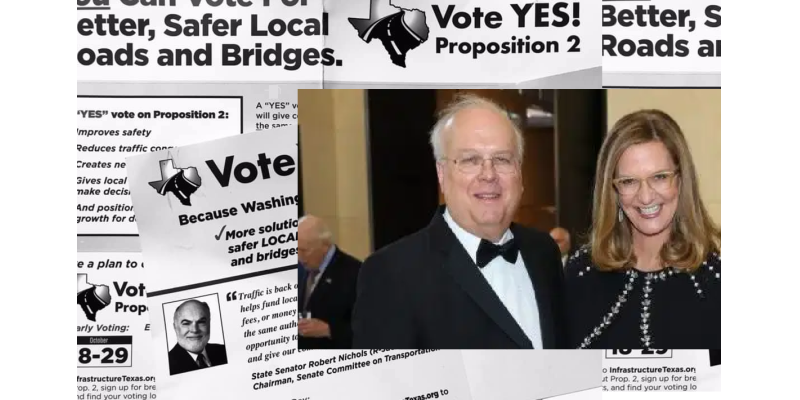 As it stands now, Texas counties do not have the power to zone as cities do.

Although counties have long pushed for the power that municipalities frequently use to control growth, Texas property owners escaping the grasp of “the big city” have long enjoyed the ability to build with little in the way of building restrictions or land use rules.

Now a state constitution amendment proposal seeks to give counties a way to control growth, and bulldoze whatever it considers to be “blight,” “underdeveloped,” or “unproductive.” That’s no editorializing — those are the words appearing on the ballot.

Short of outright zoning power, all it would take to target an undesired tract of privately owned property, should Proposition 2 pass, is the vote of an unelected board and a private-sector developer ready to front the money.

Large postcards began arriving in Texas mailboxes during early voting promising “better, safer local roads an bridges” if voters approve Proposition 2. A PAC calling itself Texas Infrastructure Now is making tall claims about the proposed amendment to the Texas Constitution which would give counties the power to condemn land to build “new roads, bridges, and transportation projects that make distressed areas more attractive for families and business without raising tax rates, fees, or money for toll roads.”

Proposition 2 would unlock for counties a 2007 law that allows for Transportation Reinvestment Zones (TRZs). Here’s a summary of what they currently do.

The mailer promises that passage would give “local leaders authority to make decisions.” Who these local leaders would be is worth a look. TRZs are governed by appointed board members — which is perhaps why the mailer used the phrase “local leaders” rather than elected officials or voters. If Proposition 2 passes, elected county commissioners courts and judges would have the power to appoint the TRZ boards.

So who’s pushing for this drastic increase in power for counties (and developers)? A quick social media search for the address on the mailer turned up the Associated General Contractors of Texas’ same office location. The PAC, largely funded by contractor lobby groups, has so far has raised around $370,000 and has spent just over $223,000 as of the Oct. 23 filing, which is enough to run a modest statewide outreach.

The chief officer of the PAC is no other than Karen Rove. Karen Rove, a registered lobbyist representing the Associated General Contractors of Texas, is the wife of George W. Bush strategist Karl Rove. We’ll leave the connections for the reader to decide. But despite that the contractor’s lobby and the Roves are generally on the side of Republicans, and even though a Republican-led House and Senate passed the bill, the state GOP is hoping to tap the brakes.

“… The Party opposes Proposition 2 because it violates the principles of a free market, creates more local debt, and is in opposition to Plank #176 concerning the creation of new management districts,” a resolution passed by the Republican Party of Texas State Republican Executive Committee (SREC)  stated.

“This amendment, if passed, would be a blank check for county governments to raise local debt in the name of ‘economic development.’ We all know what that actually means: big corporations get special favors from county government while the little guy is punished for being in the way of ‘development,'” said Don Zimmerman, head of the local taxpayers organization and a former Austin City Council member.

“The power to take property for economic development purposes is already overbroad due in part to 2005’s Kelo v. New London decision by the U.S. Supreme Court. Our Texas Legislature should be focused on ways to rein in this power that unfairly favors large corporations and special interests rather than greatly expanding it.”

However Sen. Robert Nichols, chairman of the Texas House Transportation committee, considers passage of Prop. 2 a necessity and a way to control government costs: “Prop. 2 helps fund local infrastructure without raising taxes, fees, or money for toll roads. By granting counties the same authority our cities already have, Prop. 2 is our opportunity to make Texas infrastructure a priority and give our community more local control.”

This amendment was originally filed in the Texas Legislature as House Joint Resolution 99 (HJR 99), passing the House 127-15 and the Senate 27-4, with inter-chamber amendments added late in the session.

Early voting has expired but election day is Tuesday, Nov. 2, with polls open from 7 a.m. to 7 p.m.

Interested in more news from Texas? We've got you covered! See More Texas News
Previous Article ALEXANDER: Biden Apparently Wants To Shovel 450K Each To Illegal Aliens
Next Article BLANCO: CRT- Can (You) Really Trust (Them)?