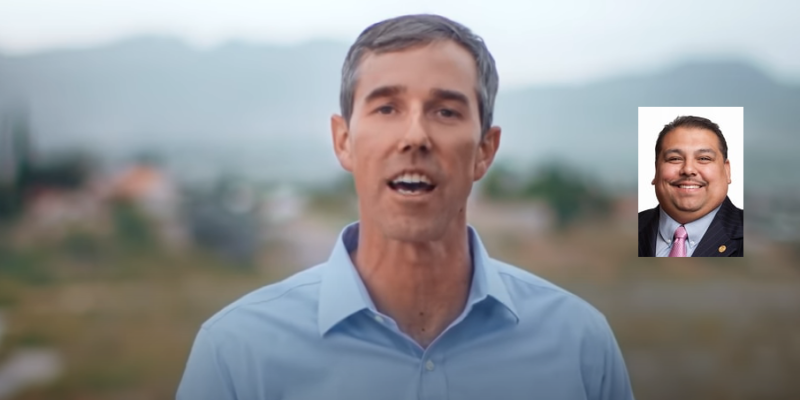 Like the proverbial polecat at the backyard barbecue, an announcement of a Texas House Democrat switching parties came right on top of Beto O’Rourke’s long-anticipated gubernatorial campaign launch, and may have stolen much of the Monday morning spotlight.

Rep. Ryan Guillen, a South Texas Democrat from Rio Grande City who often scores a little to the right of a handful of Republicans on certain scorecards, announced he would be leaving the Democratic Party for the Republican Party. He plans to run for re-election in Texas House District 31.

By Monday morning, Guillen’s website logo indicated a modest change to “Republican State Representative” from the previous “Texas State Representative.” Issue priorities on the campaign site shifted to “Protect Our 2nd Amendment Rights, Defend the Right to Life, Strengthen Our Public Schools, Lower Property Taxes, and Support Our First Responders.” Before they were “Create Jobs, Revitalize Our Towns, Invest In Schools, Ensure Healthcare, Reform Government, and Put People First — also emphasizing “infrastructure,” guaranteeing children can go to college, and prescription drugs access as liberal buzzwords and phrases, but also some conservative-sounding goals such as “cut taxes and red tape” and expanding trade school options as an alternative to college. Rural Democrats often walk that careful line between gun-toting property rights defender and champion of public education and government subsidies.

According to former House colleague Rep. Matt Rinaldi, who reportedly spent six weeks discussing the move with Guillen, the stated policy shifts are consistent from what he knows of him.  In his nearly two decades in the Texas Legislature, a press release from the Texas GOP said, Guillen “has been a strong Pro-Life advocate,” including votes for the 2021 Heartbeat Law, the 2013 20-week abortion ban, and the 2011 sonogram law. He also has “a strong record of Second Amendment support” having joint-authored the 2021 Constitutional Carry law.

“Rep. Guillen has been a friend for many years, and I am proud to welcome him to the Republican Party,” Rinaldi said. “I am confident Republicans in Austin and his constituents in the Rio Grande Valley will welcome him with open arms. Following this month’s Republican victories in Virginia and in Texas HD118, this is yet another example of how the increasing extremism of the Democratic Party has alienated Texans who care about smaller government, strong families, safe communities and the protection of the unborn. Those people have a home in our party.”

O’Rourke, in his video announcement this morning appearing in an outdoor South Texas locale, focused on the shortcomings of the Texas power grid, blaming it on inaction by incumbent Greg Abbott.

O’Rourke opposed Ted Cruz for Senate in 2018 after serving as a Congressman from his native El Paso.

From the hip: It was well-known for over a month (perhaps for years) that Beto was planning a run for Texas Governor. News of Guillen leaving the Democratic Party — long since rumored due to his centrist streak — surfaced over the weekend. If indeed Guillen’s announcement was timed to stop Beto from riding in on a white horse then that was a master stroke for the Texas GOP! And if a portent of things to come, the Texas 2022 election year will be anything but dull.