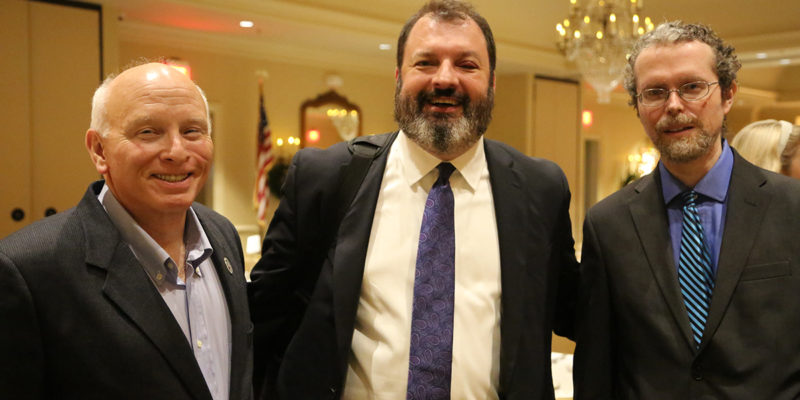 Don’t take from the headline that this is a post complaining about the world. I’m not complaining. I’m observing. I’m noting that things don’t really work how they’ve worked in the past. We’ve got to fight through adversity a lot more than we’re used to nowadays.

For example, last night was the Hayride’s annual dinner event at Metairie Country Club. It was a success, and it was great to see all the folks who came out. Our speakers – Public Service Commissioner Eric Skrmetta, Louisiana treasurer John Schroder and conservative journalist and pundit Daniel Greenfield – were terrific. Everybody seemed to have a great time and the venue, decked out as it was for Christmas, was nothing short of gorgeous.

But getting that thing done? It was a fight.

The Metairie event was supposed to happen on August 18. We’ve always done the event in Metairie in August. Of course, last year we didn’t do it at all, because John Bel Edwards had the whole state shut down over COVID. That didn’t exactly solve anything other than to bludgeon the bottom lines of lots of small businesses throughout the state, and the resulting diminution of our quality of life has manifested itself in all kinds of social pathologies – one of which being the runaway crime wave in Louisiana’s three largest cities.

None of which Edwards has taken responsibility for, of course.

He instituted a mask mandate in August which made it impossible for our event to go on as scheduled. Restrictions like that make doing business very difficult. We had to punt the event, and we had to wait until the coast was clear before we could reschedule it. That meant waiting on Edwards to let the mask mandate expire and not resuscitate it, and it also meant leaving some lead time so that we could sell tickets and table sponsorships in order to turn a profit, which is the whole point of doing these events in the first place.

When the mask mandate, which very few people bothered to adhere to in any event, as the general public long ago saw through the Branch Covidian madness of the political class, finally went away, that’s when the fight really began.

We had a number of our usual table sponsors for Hayride events demur this time because of the timing. A good many state legislators from the New Orleans area, folks who are always at our events, ended up in scheduling conflicts with the LegisGator event in Lake Charles – which was also rescheduled for this week after being originally slated for August. That knocked out a bunch of the lobbyists and others who show up all the time for these things.

Miraculously, we were still able to line Skrmetta, Schroder and Greenfield up as speakers for last night. Of course, while we managed that, we ended up losing the services of The Hayride’s event coordinator Amanda Bell, who’s moving up to Chicago this week. Amanda managed to get most of the details of the event nailed down while she was packing boxes and loading up a U-Haul, but she was on the road north while we were putting on the dinner and missed her last Hayride event.

That gave a bittersweet feel to it.

And naturally, over the weekend I managed to develop a stye over my left eye, so it ended up red and swollen just in time for the only public speaking engagement I’ve got scheduled this month. They tell me stress does this. That makes sense. I turned it into a conversation piece during the cocktail hour. What else could I do?

And as I said, things worked out fairly well last night but it was almost a disaster. For some reason, around 1:30 yesterday afternoon I had run out of things to do in Baton Rouge and decided I might as well get on the road to the venue in case we needed some extra preparation time. That was a miracle of serendipity, because I had no idea that some guy was trying to fly a helicopter from Baton Rouge to New Orleans in the middle of a dense fog, and as he whirled along at treetop level he managed to clip a power line near LaPlace and then crashed onto the I-10 bridge over the Bonnet Carre Spillway.

I had no idea this had happened when I ran up to the state police barricade at the Gramercy exit, or when I had to detour onto Airline Highway, or when I got stuck in stop-and-go traffic all the way through LaPlace. Finally, I heard about what had happened on the radio a couple of hours later.

It took three hours to get from Baton Rouge to Metairie. If I’d left at 3:30, when I expected to, I’d have been late to the event and the whole thing would have been a mess.

Skrmetta was driving in from Natchitoches, where there was a PSC meeting that morning. He had to take I-12 to the Causeway and in. His assistant Adrie deWaal, who graciously agreed to step in for Amanda, was with him. Adrie had to hustle to help finish the last minute preparations for the event. To say she had a busy day yesterday would be an understatement.

Two of our table sponsors were in Baton Rouge. By the time they’d gotten on the road trying to make it down to the event it was essentially hopeless, and they and their guests gave up trying to make it.

Everything was a fight. It’s been that way for four months with this thing.

The good news is we won the fight. Thanks to our speakers, our table sponsors, to John Tobler for helping us generate a crowd for the event, to Adrie for jumping in and making things go so smoothly, to Amanda for all she’s done over the years, and to those of you who came out in mid-December to spend time with us amid your holiday schedule.

Doing these events has been a lot of fun. Our business model is likely to change next year and we’re not sure how many more we’ll do. But we appreciate everything you’ve done to help make them a success. It’s a fight, but last night we won.