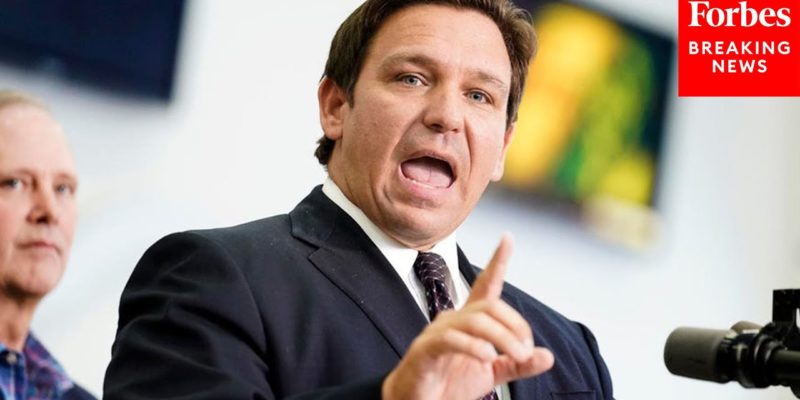 We love this perhaps more than anything we’ve seen all this month. It’s a pristine example of revivalism at work, by probably the top practitioner of it. It’s Florida governor Ron DeSantis giving a stemwinder of a speech to introduce a bill that will be debated in that state’s legislative session next spring.

The bill is the “Stop W.O.K.E. Act,” and it’s going to be the most aggressive counter to the spread of Critical Race Theory teaching in schools and elsewhere in the whole country.

The Stop Wrongs Against Our Kids and Employees (WOKE) Act would allow parents to file lawsuits against school districts they suspect of teaching critical race theory and recover attorney fees “when they prevail,” the governor said during a press conference.

“Our legislation will defund any money for K-12 going to CRT consultants,” DeSantis said. “No taxpayer dollars should be used to teach our kids to hate our country or hate each other.”

DeSantis – who has been touted as a potential 2024 GOP presidential front-runner if former President Donald Trump does not make another White House bid – said people often fear lawsuits more than a fine, as it puts them in an “uncomfortable position.”

“I think that gives parents the ability to go in and ensure that our state standards are being followed,” he added.

The bill, which will be formally introduced in the next legislative session, would also permit teachers to push back against what DeSantis called “unlawful mandates from their elected district leadership” and bar colleges and universities from hiring “woke” critical race theory consultants.

This needs to be a model piece of legislation for every state in the country not run by anti-American leftists. What we love about it more than anything else is that it recruits the trial bar as officers in the anti-CRT army, and pays them quite well to sue the hell out of school districts, teachers and administrators who push CRT insanity.

We’re not 100 percent convinced that critical race theory can be stamped out by state mandates, though we’re definitely not opposed to the attempt. Ultimately, we think the only way to make this stupidity go away is to break the public education monopoly by letting all of the taxpayer education dollars follow the child. Unlimited publicly-funded school choice creates a wide-open educational market, and the vast majority of Americans won’t choose educational options which promote anti-American propaganda as peddled by people like Robin D’Angelo and Ibram X. Kendi.

But we aren’t quite there yet, so in the meantime throwing as much sand in the gears of the Left’s attempt to convert those already-failing public schools into Antifa and BLM indoctrination centers is well worth doing.

And DeSantis is to be congratulated for taking this issue as head-on as he is. The Left hates him with white-hot passion for doing it, but he’s unstoppable in Florida and they haven’t won an argument with him on the merits yet.

What we love about this isn’t just that DeSantis has the stones to put it out there, but that he happily goes through the law explaining just how screwed the practitioners of CRT will be in Florida once it gets going. Every left-wing school administrator and school board member in Florida will denounce this bill as making it impossible to do their jobs, to which the response will be, “Good!”

Nobody wants you to do your job if it’s promoting anti-white racism or other such sludge to school kids. We want you to lose your job if you’re doing that.

Alternatively, they’re going to scream that they aren’t teaching Critical Race Theory in the schools. To which the response is, “then this law shouldn’t bother you in the least.”

Unless the parents happen to disagree with your CRT-free contention and have evidence you’re lying, then, well…you get to remember that the parents are your customers after all and you’d better treat them that way instead of attempting to sever the bond between them and their children.

Revivalism is all about going on offense. It’s a recognition that the era of political consensus is over and what’s coming will be defined by the winner of the conflict between regular Americans Ron DeSantis so eloquently represents and the Hard Left nuts who think it’s a good idea to push CRT and transgenderism to kindergartners. You can’t win that fight by playing defense. DeSantis isn’t. That’s why he’s so valuable.