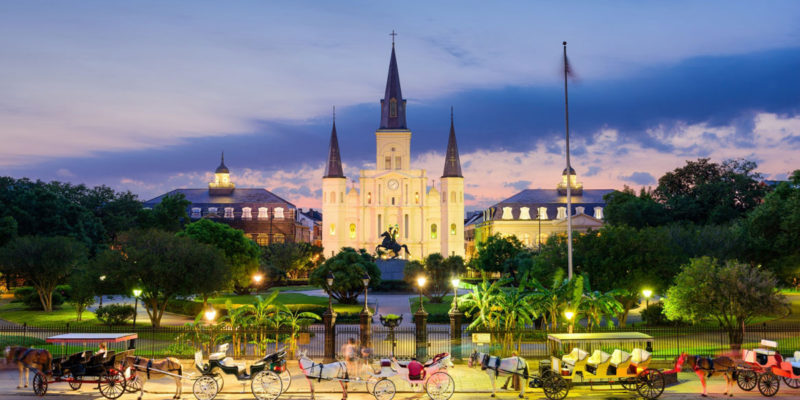 Education and economic development are the remedies put forward most often by modern man for society’s ills.  This pair was the bulk of a proposal put forward recently for ending New Orleans’s spike in crime.

Those two things are decent goals to aim for, but they cannot stop a crime wave by themselves.  Their beneficial effects, such that they are, come from the virtues that underlie them:  self-control, focus, thoughtfulness of the future, and such like.  But virtues like those don’t sprout from computer coding textbooks; that is Marxist/Communist materialistic thinking.  Virtues grow from the soil of religion.  If folks want a revived New Orleans, it is in that direction that they will have to look primarily.  The second necessary element is external enforcement of order.  Let us look at both.

To nurture the virtues necessary for a healthy cultural life, there must be a revival of the Christian Faith.  Historically, this has been accomplished primarily through the presence of monasteries of monks and nuns.  New Orleans has had this witness from early on with the Roman Catholic Ursuline nuns, and there continues to be a monastic presence within the city, despite attrition and general apathy towards and ignorance of them.  But their growth is essential to New Orleans’s spiritual health, just as it has always been in the broader Western world.  The present conditions in New Orleans reflect the pre-Christian West in some striking ways, e.g., the lawlessness and violence, but this does not dishearten us because of what we find recorded in history.  The Orthodox priest Fr Aidan Keller writes,

Throughout the 7th and 8th centuries, the Gospel was slowly accepted by more and more of Europe, but it must be remembered that much of Europe was still staunchly pagan. Many of the European peoples were so fierce that their eventual acceptance of the gentle Jesus of Nazareth is considered by some historians to be the greatest miracle of Christian history. Evangelism at this time was conducted mainly by monks, and their principles were very sound and are relevant today. They would found a monastery in a lonely place, away from human habitation in a pagan area. Some among them might preach to the people, but only if they had a special gift for this. The other brethren would simply live their Gospel lifestyle to the fullest. With the passage of time, the local inhabitants would discover the true nature of the Christians’ lives, and when they liked what they saw, they would be near to Baptism. The compunction and orderly beauty of the church services also warmed the hearts of these peoples, and served to convert them as much as any conversation or reasoning. In Western Europe, it was the Irish monks who were the most active missionaries; in Central Europe, Benedictine monks and nuns from England christianized the German lands.

St. Benedict is known as the Father of Western Civilization because the monasteries were for many years the only oases of stability and learning in a barbaric world. They fed the poor, saved the books, taught people how to read them, and fostered a new ethic, teaching the world that manual labor was honorable. (Formerly, manual work was thought contemptible, only fit for paupers and slaves.).

Many people today object to Christianity on the grounds that no one is doing as the early Christians did: sharing all possessions in common, renouncing private property, living in community, praying daily, “working with [the] hands, the thing that is just,” and the other things mentioned in the Book of Acts in the Bible. In monasteries of the Orthodox Church . . . this way of life still exists — to the glory of Jesus Christ.

Yes, we see horrible things in New Orleans on a regular basis, but it used to be like that all over Western Europe.  And yet God transformed the wild heathens into good and virtuous Christians through the presence of the monastics.  Has God become so weak that he cannot change the gang-bangers and drug dealers and thieves of New Orleans into spiritually healed men and women?  We think not.

Furthermore, monasteries have often been at the forefront of providing much needed charity to the people around them, in addition to being major centers of education.  About St Illtyd’s (+6th century) monastery in Wales it is said,

Hundreds of monks lived in Llantwit Major simultaneously and one early source says that at various points altogether some 3,000 brethren led the ascetic life there under the holy abbot Illtyd. Monastic life in this great center flourished until the Norman Conquest, and it gained fame for teaching Greek, Latin, theology, philosophy, grammar, poetry, rhetoric and mathematics. Indeed, it was one of the finest educational centers in Western Europe at that time and possibly the first center on such a scale in Britain.

And at St Theodosius’s (also 6th century) monastery in Palestine, we find that ‘Saint Theodosius built a home for taking in strangers, separate infirmaries for monks and laymen, and also a shelter for the dying.’

But until the virtuous fruit of the monasteries ripens and manifests itself in daily life, there will be the very great need for protection against violent criminals.  If the mayor of New Orleans will not do his/her duty to fight them, we will need a Gov Jeff Landry or whoever fills that office after Gov Edwards to take the lead.  Article 4, Sec. 5J, of the Louisiana Constitution allows the governor to make use of Louisiana’s armed forces to ‘preserve law and order’ and ‘in other times of emergency.’  New Orleans’s rampant lawlessness strikes us as fitting those conditions pretty well.

Contrary to the shallow, post-Christian thinking of the Enlightenment and afterwards, as exemplified in folks like Locke, Rousseau, Jefferson, Marx, and others, life is not about the pursuit of happiness or property; it is a preparation for death and the eternal life that follows it.  When we lose sight of that, society begins to crumble, and folks start looking for solutions in all sorts of strange places.  Education, economic development, even families, by themselves cannot lead us out of the pit we’ve fallen into in our religious blindness.  For a New Orleans renaissance, there must first be a great outspreading of Christian monasticism, helped along by a mayor or governor willing to do hard battle with criminals.  Anything else is utopian dreaming of the Communist, the Capitalist, or some other deluded philosopher.