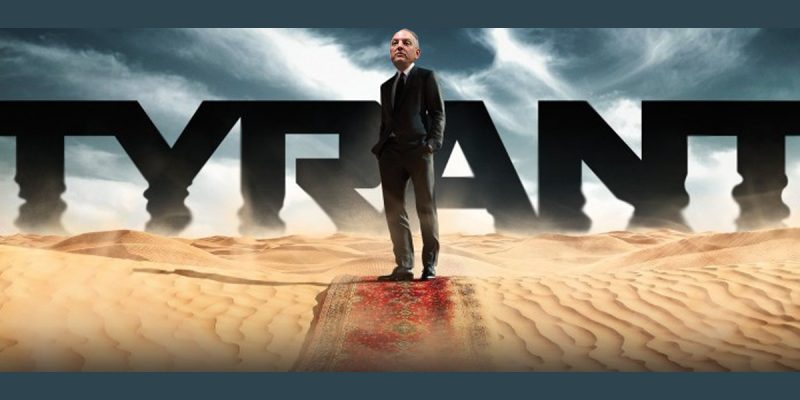 We’ve remarked a few times that John Bel Edwards is the closest thing to a dictator Louisiana has had since Huey Long, but this week Edwards removed all doubt.

You might have read about the most recent developments in the Tony Spell saga, and specifically the dismissal of Spell’s lawsuit against Edwards on the grounds that his attempts, in 2020 during the height of the COVID panic, to stop services at the Life Tabernacle Church that Spell pastors were a violation of First Amendment rights.

Spell is also engaged in litigation surrounding criminal charges filed by East Baton Rouge Parish District Attorney Hillar Moore on the same grounds, and that case is at the Louisiana Supreme Court.

Edwards filed a motion in that case this week, which is tantamount to suing Spell. Edwards’ motion asserts that because Spell’s argument is that the proclamation he was violating was unconstitutional that he should therefore be heard in the case. That might or might not be a legitimate argument; we don’t find it common, though, that a governor would be intervening in a criminal case being prosecuted by a district attorney against a private citizen. When Edwards’ motion was filed it raised a few eyebrows among the lawyers we talked to.

One of them said it came off like Edwards is nervous that his COVID emergency powers might not ultimately stand up in court at the end of the day.

But whether or not that argument can stand on its feet isn’t the juice here. Because Edwards’ motion, which from the looks of it was cranked out by his executive counsel Matthew Block, who strikes us as a drop-dead terrible lawyer, named Attorney General Jeff Landry as the attorney of record. As represented by James Garner, who’s the lead partner at the Edwards-connected New Orleans firm Sher Garner. We gather that Garner’s firm has some sort of contract agreement to do legal work for the AG’s office, but one would understand that arrangement to be contingent on Jeff Landry directly commissioning him to perform such work. 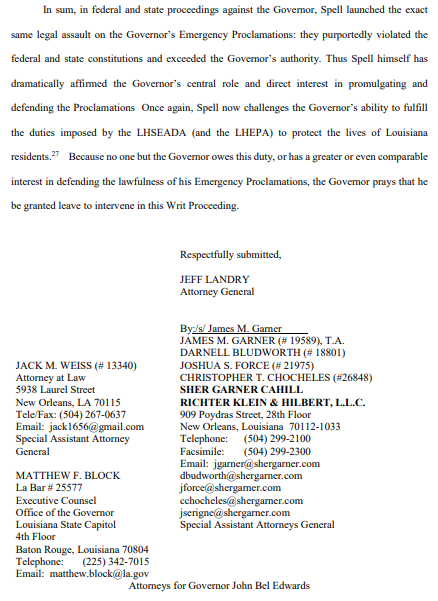 This looked peculiar, to say the least. And it got a good deal more so when Landry saw it and was highly unamused.

Which resulted in a response by Landry to the Supreme Court in the form of a Motion to Strike, or alternatively, opposition to Edwards’ Motion to Intervene in the case. Here’s how that went. From Landry’s motion…

The Motion to Intervene – submitted, in part, by the attorneys with the law firm of Sher Garner Cahill Richter Klein & Hilbert, LLC and by Jack M. Weiss, Attorney at Law – was filed by those counsel purportedly as “Special Assistant Attorneys General.” However, Attorney General Jeff Landry has never appointed these attorneys to represent the Governor in connection with any criminal proceeding against Applicant, Mark Anthony Spell, including the instant writ application. It would not be proper for the Attorney General to make an appointment for special counsel, as this is not either a risk-covered case or a criminal case being prosecuted by the Attorney General.

Additionally, and very deceptively, the attorneys filing the Governor’s Motion to Intervene included “Jeff Landry Attorney General” in the list of “Attorneys for Governor John Bel Edwards,” and on their signature block. Let us be clear. Jeff Landry does not represent Governor Edwards in this matter nor does any attorney with the Louisiana Department of Justice. This filing was done without the knowledge or consent of the Attorney General or anyone with authority to give such consent.

Governor’s counsel are well aware that they are not authorized to represent that they are Special Assistant Attorneys General to this Honorable Court without an appointment by the Attorney General. Previously, counsel were instructed to correct future pleadings in a case where they were representing the Governor, in order to avoid confusion to this Honorable Court. See Exhibit A. The continued use of the Special Assistant Attorneys General title to this Court—the Supreme Court of Louisiana—is misleading and improper, and it appears intentional.

Unlike the Governor, the Attorney General has constitutional authority (1) to institute, prosecute, or intervene in any civil action or proceeding; and (2) upon the written request of a district attorney, to advise and assist in the prosecution of any criminal case. La. Const. art. IV, § 8. The Governor does not. Additionally, it is the Attorney General alone who, as a matter of right, shall be heard on constitutional challenges. La. Code Civ. P. art. 1880. The Governor does not have such authority.

These lawyers have made representations to this court that are clearly false and inaccurate. Jack Weiss, James Garner, Darnell Bludworth, Joshua Force and Christopher Chocheles do not have the authority to act on behalf of the Attorney General or the State of Louisiana in this matter, and they have never been appointed as Special Assistant Attorneys General in this matter.

All of this comes off as very untoward, and dishonest even by Edwards’ standards. We can’t say that it’s the kind of thing that would get some of these lawyers disbarred, but it feels like you might have some sort of disciplinary action coming for it. Falsely representing that you’re the counsel for Landry in a case he opposes bringing?

In what have to be two of the most extraordinary filings in the history of the Louisiana Supreme Court, Gov. John Bel Edwards tried to intervene in a criminal case pending before the court ­— an unprecedented move — and Attorney General Jeff Landry filed a motion to throw out the governor’s intervention because he says the governor falsely filedthe document in the name of the Attorney General.The AG also said the governor has no authority to intervene in a criminal case on his own.

It all began Tuesday, Jan. 18, when Gov. Edwards filed a 76-page document with the Supreme Court claiming to have the right to intervene in the criminal case charging Rev. Tony Spell of Central with the crime of holding church contrary to Edwards’ orders back in March 2020.The document purported to be from the Attorney General.

Edwards wrote the “law” which supposedly made it a crime for Pastor Spell to hold church. Actually, he issued an Emergency Order, which the governor says trumps the First Amendment to the U.S. Constitution.

The Attorney General says the governor has no power to make laws and his orders cannot supercede [sp] the Constitution.

Edwards’ attempted intervention filed with the Supreme Court Tuesday would allow the governor to assist in prosecuting the pastor.

Rev. Spell’s attorney, Jeff Wittenbrink said Edwards is trying to serve simultaneously in all three branches of government. As governor, he is head of the executive branch. As a lawmaker, he is part of the legislative branch. And as a prosecutor, he is part of the judicial branch. Wittenbrink said that is called one-man rule and doesn’t fly in American-style government.

We agree with Jenkins’ inference that Edwards’ EO doesn’t trump the First Amendment, though so far there hasn’t been as much luck as we’d like to see in pressing that argument in court.

But still, the fact that Edwards ran to the Supreme Court essentially on false pretenses in an effort to bootstrap his way into the Spell case, while dragooning Landry’s office into the melee, is just strange. It indicates a level of lawlessness and thuggery not seen since the days of the Kingfish, and frankly it’s unacceptable.

Block probably ought to be made to resign as executive council and disbarment should be on the table for having engineered this fiasco. And Edwards should be censured, at minimum, by the Louisiana legislature when it convenes next month. It’s too bad we don’t have impeachment for state officials in Louisiana’s constitution, because this week’s events are an indication Edwards’ entire management of the COVID pandemic in Louisiana is a gross departure from acceptable norms.

Interested in more news from Louisiana? We've got you covered! See More Louisiana News
Previous Article GURVICH: How’d Joe Biden Do In His First Year?
Next Article BERNARD: Is John Bel Edwards A Law Unto Himself?