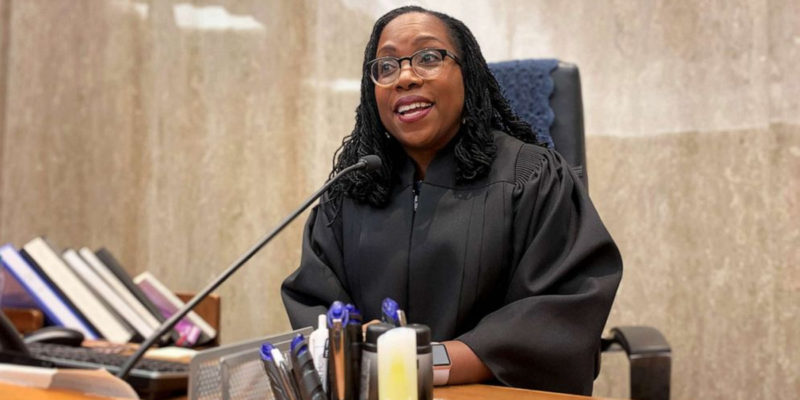 Apparently the White House needs to change the narrative away from the abject and total failure in foreign policy that resulted in Vladimir Putin swallowing Ukraine this week (and despite all the bluster about how the Ukrainians will mount an insurgency that will bleed Russia’s army for years, none of that will happen; Team Biden is already backing away from the idea of sending weapons just as they backed away from economic sanctions anyone would care about), because there was Supreme Court news.

We have a nominee to replace Stephen Breyer on the Court. It’s Ketanji Brown Jackson, who meets the sole criterion Joe Biden, the part-time occupant of the White House when he’s not convalescing in Delaware, has set forth for his nominee.

Namely that Jackson is of African ancestry and she’s female.

Biden restricted his choices of potential Supreme Court nominees to black women due to a promise he made to South Carolina congressman James Clyburn. It was Clyburn’s endorsement of Biden in advance of the South Carolina primary which rescued his then-dying presidential campaign and made him the nominee, so what happened this morning isn’t just affirmative action out of control but a greasy payoff to a scummy politician.

And no, Jackson isn’t particularly qualified to be a Supreme Court justice.

Ketanji Brown Jackson, one of the women reported to be on President Biden’s short list to replace Supreme Court Justice Stephen Breyer, is facing heightened scrutiny over a judicial record that includes high-profile rulings later overruled by higher courts.

Brown Jackson’s record was a focal point last year during her confirmation for a seat on the U.S. Circuit Court of Appeals for the District of Columbia, where she now sits. The 51-year-old judge is widely considered one of the favorites to replace Breyer.

“Judge Jackson’s record of reversals by the left-leaning D.C. Circuit is troubling for anyone concerned about the rule of law,” Judicial Crisis Network president Carrie Severino told Fox News Digital on Tuesday. “For example, in Make the Road New York v. Wolf, a D.C. Circuit panel composed of a majority of Democratic nominees concluded that Jackson had set aside a Trump administration rule where there was no legal basis to do so.”

“Cases like these suggest that Jackson might be willing in politically charged cases to ignore the law to deliver a particular policy outcome, and that’s not what we want to see from a Supreme Court justice,” she continued.

One 2019 case involved an order that expanded the Department of Homeland Security’s (DHS) definition on which noncitizens could be deported. Another overturning involved a trio of orders on federal employees’ collective bargaining power.

Jackson’s DHS ruling was overturned in a 2-1 decision by the D.C. Circuit Court, which said reviewing the DHS policy did not fall under the Administrative Procedure Act.

The judge’s ruling on the three collective bargaining orders was overturned unanimously b;y the D.C. Circuit Court, which ruled that Jackson did not have jurisdiction to adjudicate the case.

Nominating somebody who’s been on the DC Circuit for all of a year after getting routinely panned by that circuit for her bad rulings as a district judge is hardly a nod to the meritocracy.

Clyburn didn’t even want Jackson. He wanted Michelle Fields, who’s a federal district judge in South Carolina. Fields at least has experience doing ordinary law, unlike Jackson, and has the great benefit of having come from someplace other than the Ivy League. Biden should have listened to Clyburn all the way if he was going to listen at all. Instead, we get a bad district judge jumped up to the DC Circuit (and whose confirmation process for that job wasn’t the best at that) who is really just another cookie-cutter Harvard leftist.

Jackson doesn’t represent the black community. She represents Harvard Yard and its boutique leftism. Oh, and she represents something else…

Recently, the Arabella Advisors network has been increasingly vocal about the fact that Jackson was their preferred nominee—the one they are sure will rubber stamp their left-wing political agendas from the bench.

Today, Joe Biden is delivering exactly who they demanded. /2

In other words, this is a diversity hire offering no diversity at all. Ketanji Brown Jackson is the same old crap that the clueless Sonia Sotomayor and the corrupt Elena Kagan bring to the table – she’s a lockstep leftist who thinks social-justice politics is an adequate substitution for constitutional law, and her nomination is nothing but pandering and payoff.

Frankly, though this won’t happen, Jackson should take a powder. As I wrote in The American Spectator a couple of weeks back…

Honestly, she ought to turn down a nomination made on that basis because to accept it means she’s perfectly fine with a racially biased process, and it’ll mean she’s willing to put aside the concept of a colorblind America in favor of racial bean-counting, if not get-evenism. It’ll basically mean she’s a distaff Ibram X. Kendi in a judicial robe, and that is a bad look for all kinds of reasons.

And it’ll mean that statue of Lady Justice, blindfolded, in front of the Supreme Court ought to be taken down.

If nothing else, this nomination is unconstitutional. Biden explicitly limited his pool of nominees to black women, and that’s a violation of the Supreme Court’s ruling in the Bakke case – namely, that race and racial quotas cannot be used as the sole criteria in hiring decisions.

It’s a signature move by Team Biden to disengage from the Ukraine failure so as to spectacularly fail elsewhere. This administration literally cannot do anything right, and the Jackson nomination, botched from the outset by the president’s stupid announcement he was restricting his choices by race and plumbing – and apparently to Ivy League pedigrees on top – is more evidence of it.

This is one of those instances in which the Republican Party is going to be called upon to actually be worthy of the power the polls show the American people want to give it this fall. Rolling over and letting Biden put another privileged, mediocre leftist in a position of political authority without a fight is an indication this fall’s likely victory is simply a rearrangement of the deck chairs on the Lusitania.